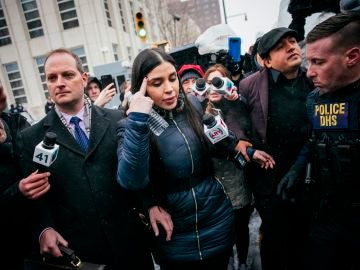 The wife of ‘El Chapo’, that attracted media attention when she accompanied her husband during his trial in New York between 2018 and 2019, is accused of “participating in a conspiracy to distribute cocaine, methamphetamines, heroin and marijuana for importation into the United States,” the official note indicates. .

“In addition, it is alleged that (the wife) conspired with others to help Guzmán in his escape on July 11, 2015 from the Altiplano prison, located in Almoloya de Juárez, in Mexico,” the statement said. Once “El Chapo” was arrested again in Mexico in January 2016, his wife planned “yet another prison break” along with other partners, before the former leader of the Sinaloa cartel was extradited to the United States in January 2017, the Justice Department says.

“El Chapo” was declared guilty of drug trafficking by a jury in New York in 2019 and is now serving a life sentence in a maximum security prison in Colorado (United States).

Enma Colonel, who has twin daughters with “El Chapo” and came to create a clothing line based on the controversial figure of her husband, also attracted the attention of the media in 2019, when she assured that had received several death threats after the capture and release of the boss’s son, Ovidio Guzmán López.