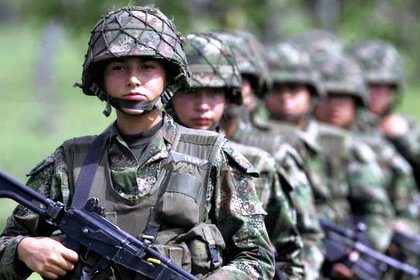 Women in the Colombian Army

ecently, the complaint of a group of soldiers who assure that the inhabitants of El Tambo, Cauca, They were removed from the township of Veinte de Julio and Playa Rica by acts of violence for arriving at the scene of the alleged presence of illegal armed groups.

The uniformed men are part of the Army’s Third Division and with the argument that their presence put the tambeños at risk, the soldiers denounce that they were taken out of there, surrounding them and even threatening them.

“At the height of the site known as Veinte de Julio, about 300 people crowded and surrounded the troops that were making movements towards the mountain to take over the village and create some security conditions, due to the same complaints from citizens, about homicides and acts of insecurity, ”denounced General Marco Vinicio Mayorga, commander of the Army’s Third Division.

The allegedly bullied also assure that to avoid problems they decided to leave the scene and to demonstrate the situation they recorded the episode with their cell phones. The uniformed officers denounce that The residents of El Tambo are “instrumentalized by drug trafficking that generates acts of violence.” In addition, they assure that in the sector there is a presence of the FARC dissidents, of the “Carlos Patiño front, a mafia organization dedicated to drug trafficking,” denounces General Vinicio, who added that the same inhabitants of the sector have allied themselves with the criminals and “have provoked this type of actions”, he denounced.

The Army repudiated the actions of the population

General Vinicio spoke with La FM and assured that the soldiers went to the scene of the events because the inhabitants themselves called them. Similarly, he assures that his subordinates “carried arrest and search warrants, they also had intelligence information to reach even some members of the mobile column ‘Carlos Patiño’.”

The authorities decided to investigate and asked some tambeños about what happened, to which they said that they decided to act in this way against the uniformed men because “they felt at risk from the actions that the armed groups could carry out,” for which they asked members of the army to leave.

The Army denounces that it is not the first time that such an event has occurred. The higher ups warn that in several municipalities and townships of the department of Cauca these situations are frequent.

“In Cauca, and Nariño, we see a modus operandi in which the community surrounds the troops and through insults and ways in fact the troops are expelled from an area”, Highlighted the high command in dialogue with the station.

The high official concluded by assuring that only when the lives of soldiers and members of the Army are at risk do they use weapons in self-defense and that they always “We do pedagogy with our men”, in order to encourage them to non-violence to avoid “actions that harm our population,” said the general in dialogue with the radio station.