Argentinos Juniors, with sheer forcefulness, beat Aldosivi in ​​Mar del Plata 4-1, in a match valid for the fifth date, zone 5, of the Professional League Cup (LPF), baptized in recent days with the name of Diego Maradona in honor of the figure of the world soccer star, who passed away last week.

In a meeting, of discreet technical level, marked by the emotional tone and the displays of affection towards the crack that emerged in the La Paternal entity, DT Diego Dabove’s team exhibited pure practicality. Paraguayan Gabriel Ávalos (Pt. 32m. And St. 19m.), Nicolás Silva (Pt. 46m.) And Juan Román Pucheta (St. 49m.) Scored for the visiting team, which settled in second place in the zone with 7 units, with a better goal difference than his loser (+1 compared to -4). The coupling Francisco Grahl (St. 22m.), By executing a penalty kick, discounted for the ‘Tiburon’, who lost their second consecutive match at the José María Minella stadium (the previous one, 1-4 with San Lorenzo).

Before the start of the game, the two teams gathered in the center of the playing field, held the relevant minute of silence and offered new expressions of affection to remember the mythical and eternal captain of the Argentine national team, who died last Wednesday at 60 years. But after those emotionally charged testimonies (which were renewed at 10m. When the referee Fernando Rapallini ordered a minute of applause to celebrate the memory of the ’10’), a nondescript meeting followed, with the balls to any destination, inaccuracies and interruptions as a common denominator.

In this context, the goal could only come from a gross mistake. And it happened at 32m., When Jonathan Schunke delayed the clearance too long, fell asleep and was anticipated by Avalos, who finished off the goal.Before the end of the stage, the visiting cast increased the figures, after a run by Colombian Edwar López , who on the right sent a center that was connected by Silva (46m.).

In the second half, Aldosivi sought to get ahead on the field with the income of Rodrigo Contreras and Facundo Tobares. But he was exposed to the replicas of the ‘Bug’ and the result became an inclined plane. Ávalos (19m.) Arrived to connect a long rebound granted by goalkeeper Pocrnjic to establish the provisional 3-0. Minutes later, a hand in the area was sanctioned by Rapallini and the midfielder Grahl (22m.) Reduced the figures, through a penalty. Already in injury time, another run -this time by Diego Sosa- was ended by the entered Pucheta and Argentinos embraced an exaggerated triumph but that gave him back his hope of getting into the classification towards the Championship zone.

Atlético Tucumán extended its winning streak in the Diego Maradona Cup, by defeating Arsenal tonight 3-2, in a changing and emotional game that was defined in the final minutes in favor of the local, which continues with the ideal score in zone 1 after playing the fifth date. The Sarandí team had the victory in their hands since they were twice in advantage with the goals of Lucas Albertengo and Lucas Necul, from penalty, but the local, who never lowered his arms, tipped the balance with the goals of Matías Alustiza ( did two) and Marcelo Ortíz, in added time to regulation. The team led by Ricardo Zielinski has 15 units in five presentations and is the only one that has an ideal score in the competition, while Arsenal was relegated in the table with 4 and its chances of qualifying are minimal since it is forced to beat Racing ( 3) and wait for the Tucumanos to defeat Unión (7), at the end of the group stage.

As happened in all stadiums in the country, before the match, a tribute was paid to Diego Maradona and numerous flags with dedications to the idol were observed in the stands of the stadium, who was “present” even in some specific actions of the match. When the ball began to roll, Atlético had the best chances to convert but Lucas Melano finished weakly at the hands of Maximiliano Gagliardo in the first arrival of the local, while Augusto Lotti defined crossed and sent the ball by the side of the right post to the come face to face with the visiting goalkeeper. 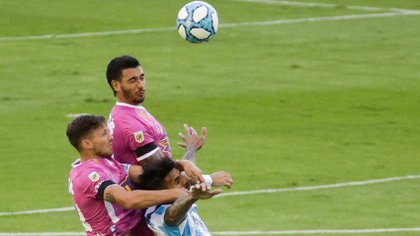 Arsenal did not have depth in their attacks, although they forced Cristian Lucchetti to make an effort in a couple of actions to keep the goal at zero in the first half that had intensity but lacked the emotions that came in the second half. A fast and precise attack began with a pass from Jesús Soraire for Jhonatan Candia to run, who yielded it to the middle and Albertengo, who touched the ball in front of the goal and allowed Sarandí to take the lead.

The roads to the rival goal seemed closed for the local, but a penalty allowed Alustiza to equalize with a weak left-handed shot that left Gagliardo without a chance, a style that reminded the executions of the “10”. The former Chacarita celebrated by kissing the image of the idol that he had on his shirt.A clear penalty that Marcelo Ortiz committed when taking Nicolás Castro’s shirt was ignored by Jorge Baliño, although a few minutes later the referee did not hesitate to charge a foul within the local area that Necul calmly executed to put his team ahead again. He also celebrated by displaying the number 10 on his shirt.

The three points were ready to go to Sarandì, but in two consecutive attacks the goals of Ortiz and Alustiza arrived to leave the visitor empty-handed and prolong the winning streak of the Tucumanos who have an eight-point advantage over their guard, with numbers that amaze, both locals and strangers. 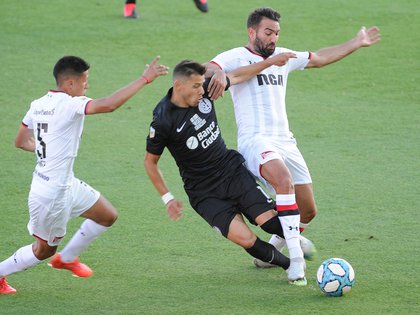 Students from La Plata and San Lorenzo matched 0-0 at the close of the fifth round of group 5 of the Diego Maradona Cup. Mariano Soso’s team qualified for the Championship Phase, while Leandro Desábato’s team ran out of chances and still haven’t won in the last 11 games (they did not convert in the five of this contest).

The first half started with a lot of rhythm. At 5 minutes García had a heads up that Monetti covered. At 13 the visitor responded with a shot from Diego Rodríguez that hit Andújar’s right post and on the rebound Alexander Díaz, the figure on the court could not and the ball hit the other post. At 29 minutes Rodríguez tried and Monetti deflected it. Two minutes later, a half lap by González went high and at 33 García had it again and his right hand went wide. At 43 again San Lorenzo was deep, Gabriel Rojas overflowed, with a great task, and Peruzzi at the far post with a header made Andújar shine. The complement began with less intensity and only after 20 minutes the visitor warned, Diaz fought it and Di Santo finished down and Andújar saved without problems. At 25 minutes there was good action from Diego García who finished Iván Gómez with a high shot. At 34, in a corner exit Juan Ramírez tried and Mariano Andújar responded by taking it out from above. At 38 Diaz fought her and saved Colombo. In the end, Estudiantes had a counter that they could not take advantage of.

Perhaps one of his last games was played at the premises by the youth Darío Sarmiento, soon to be sent to Manchester City in England, while the brothers Óscar and Ángel Romero, affected by Covid-19, were not on the visit.

On a day full of emotions for Maradona, Boca beat Newell’s with authority

The heartbroken cry of Dalma Maradona on Cardona’s first goal: this was the celebration of the Boca players

All the tributes to Maradona in La Bombonera: the moment the stadium lights were turned off and his box lit up