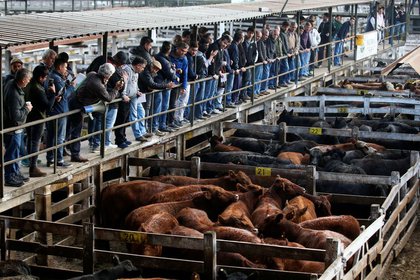 BUENOS AIRES, Nov 16 (.) – Argentina’s beef production plants will invest 187 million dollars, allowing food exports to increase 33% in three years to 1.2 million tons per year, the head of the government said on Monday. the exporting cold store in an act with government authorities.

Argentina is a major world exporter of beef and China its main customer. During the announcement, the governor of the province of Buenos Aires, where important cold stores are located, said that the production expansion is mainly intended for the Chinese market.

According to Ravettino, the investment plan has already started and will be extended during 2021 and will be carried out by 11 companies in the sector. The increase in exports would imply that revenue from shipments would rise to 5.25 billion dollars, from the 2.9 billion expected for this year, he said.

For his part, the governor of Buenos Aires, Axel Kicillof, said that “this expansion that is being carried out is to mainly supply” the Chinese market.

China is the main destination for Argentina’s beef exports. Of the nearly 645,000 tons of Argentine meat exported between January and September of this year, 73% went to the main Asian market.

In turn, Argentine President Alberto Fernández said he was evaluating the possibility of controlling the prices of some cuts of meat for the local market. Argentina has one of the highest food consumption rates in the world and the price of meat has an important social impact.