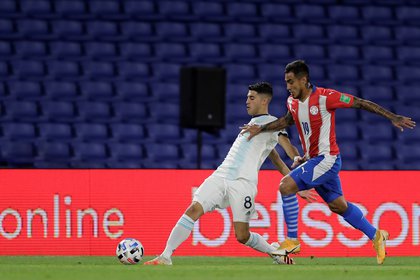 In the image the player Exequiel Palacios (i) from Argentina during a match for the third date of the South American qualifiers for the Qatar 2022 World Cup, at the Alberto J Armando “La Bombonera” stadium, in Buenos Aires (Argentina). . / Juan Ignacio Roncoroni / Argentina

Buenos Aires, Nov 16 . .- Argentine midfielder Exequiel Palacios, who last Thursday suffered a lumbar injury during the game against Paraguay that will take him away from the competition for at least three months, was discharged from hospital on Monday.
“Exequiel Palacios medical report. The player continues to evolve favorably and today he was discharged from hospital. Come on, Pala!”, Reported the Argentine Football Association through social networks.
Palacios, a Bayer Leverkusen midfielder, suffered a “direct trauma to the left paravertebral lumbar area, verifying a fracture of the transverse processes of the lumbar spine” when he was hit by Paraguayan striker Ángel Romero.
The 22-year-old midfielder was immediately transferred to a hospital in Buenos Aires and Bayer Leverkusen announced the next day that he will be out for at least three months.
“He hit the whole group in general, he is a very loved boy and we were finally starting to have in the national team to start a cycle that could be brilliant in his career. But it is an important stop for him. He is an extraordinary boy” Argentina coach Lionel Scaloni said Monday at a virtual press conference.
“I was able to talk yesterday, we tried a video call and he couldn’t move much, he was in pain. We sent him a big hug and we are close. He can give the national team a lot and when we need him most we have to deprive ourselves of him and it’s a shame. We are all with him, “added the coach.
Paraguay’s coach, Argentine Eduardo Berizzo, wished him a speedy recovery on Sunday and assured that Romero contacted his colleague to apologize for that “accidental action.”