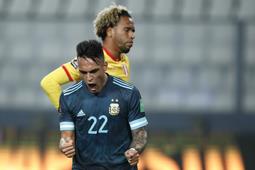 Soccer was no consolation for Peru.
Argentina beat it 2-0 with goals from Nicolás González, at 16 minutes, and Lautaro Martínez, at 27, on Tuesday at the National Stadium in Lima for the fourth date of the South American qualifiers for Qatar 2022.
The duel was played with Peru immersed in the worst political crisis in two decades, which led to the departure of two presidents in a week and massive protests, with a balance of two dead and a hundred injured. The performance of his selected was not palliative.
La Albiceleste, which has evolved towards a team less dependent on star Lionel Messi, thus closed the 2020 chapter of the unbeaten classification with three victories, two of them on the road – against Bolivia in La Paz after 15 years and the last in Lima after 16 years – and a tie. After their best collective performance of these qualifiers, Argentina occupies the second position of the table with 10 points, two less than the leader Brazil.
“Happy with the victory, we needed it after the game we played the other day (1-1 draw against Paraguay). From the beginning we had a great game, the goals came and we created a lot of chances, ”Messi said after the game. “I think this is the path we have to follow. Little by little we are getting stronger as a group ”.
In contrast, the Blanquirroja harvest was meager: one point out of 12 up for grabs, which places it in the penultimate position above Bolivia. The ineffectiveness in the network has been his distinctive mark, partly justified by the absence of his emblem Paolo Guerrero, who is recovering from a serious injury to his right knee.
“We have to do more offensively, defensively we have to do more, we have to keep working, we cannot hide at this time,” forward André Carrillo said. “You have to try to add, preparing well in our clubs. What we have done is not enough ”.
In an attack started by the left wing, full-back Nicolás Tagliafico played with Giovani Lo Celso. The Tottenham midfielder overflowed and threw the pass back for González, who defined a left-handed cross. It was the second goal that the German Stuttgart striker scored in the Albiceleste jersey – the other he made last Thursday for a draw against Paraguay.
With the advantage, the spaces were opened for Argentina and each counterattack became a nightmare for the local.
In the second goal, Leandro Paredes enabled Martínez from the center of the field, who got rid of goalkeeper Pedro Gallese with a waist break and almost without an angle pushed her into the net. The Inter Milan striker has emerged as the top scorer of the coach Lionel Scaloni era with 11 shouts.
“Today we were calmer when we had the ball, we handled it with patience and we found the spaces,” Martinez analyzed.
With no public in the stands due to sanitary restrictions due to the coronavirus pandemic, the team led by Argentine Ricardo Gareca took possession of the ball at the start of the second half and arrived with danger, like a right cross from Carrillo. The inclusion of the Italian-Peruvian Gianluca Lapadula, who had excited the minutes he played against Chile, was no remedy to cure the lack of goal.
Captain Messi, favored by a certain innocence in the Peruvian brand, had the most lucid performance so far in the qualifying rounds without becoming the figure of his team. The Barcelona star recovered balls and generated several attacks, although the goal was denied.
The only mole for Lionel Scaloni’s team was the warning from defender Nicolás Otamendi, who will prevent him from playing the classic against Uruguay at the end of March, due to the accumulation of yellow, when the qualifying rounds resume.
For its part, Peru will visit Bolivia.