Argentina started its journey in the Olympic Games on the wrong foot and, like Spain, with which it shares favoritism in Group C, was unable to successfully solve its Olympic debut after fall against Australia, in a duel that he faced with one less man in the second part.

Three minutes before the break Francisco Ortega he was sent off for a double yellow card. By then he already had the score against.

He dominated the ball, but it was of no use to him. Australia was planted with a 4-4-2 pressing up and looking for, and finding, the counterattacks. It didn’t take long for it to hurt. Long ball to the back of the Albiceleste defense so that Joel king, left back, surprised from behind rushing the baseline and serving the ball to Lachlan Wales to finish at pleasure at the far post. 0-1 in the 14th minute.

Argentina tried to react and Carlos Fernando Valenzuela had the best chance after a cut in the area, but the ball was taken out by the central Souttar just before he sneaks into goal. Danger that he did not recreate.

Meanwhile, Australia continued warning the counterattack and was able to score up to two times, but both plays were canceled by a just offside. What’s more, Riley McGree he was about to score one of the goals of the tournament at m.29 with a Chilean inside the area, but Ledesma managed to save her in two halves. Of course, a quarter of an hour later he would be the protagonist.

Ortega was sent off for a double yellow in just three minutes. The first in a lateral foul and the second before the service of the same. The referee, the Serbian Srdan Jovanović, previously warned that he did not want to grab hold, but McGree and the Argentine defender got hooked and the referee decided to deliver justice with a yellow to each player.

Another hard blow from Argentina, this on the edge of halftime, and he did not recover. The game became tense in the second half, with up to five cautions, in a rhythm that benefited Australia; the less things will happen with the ball, the better. 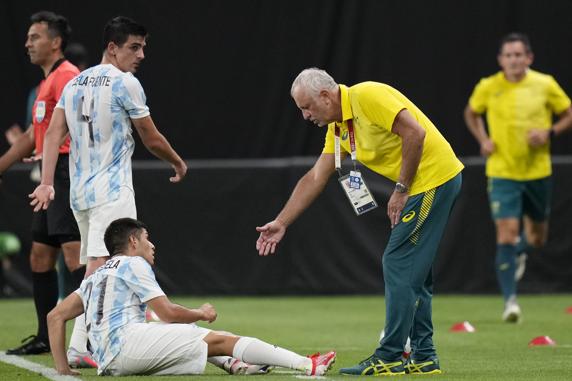 And in this desperation and numerical advantage he also had opportunities to increase the income before, but Ledesma He took at m.47 a shot from Arzani hitting the left post and already at m.70 a point-blank shot from Caleb Watts; thus demonstrating the great reflexes that he has and that he wore in LaLiga Santander last season with the Cadiz.

Finally, the final 0-2 came at m.80. Marco Tilio He went out onto the pitch and not 30 seconds later, on the first ball he touched, he scored. Great cross shot stuck to the post that served to certify the Australian victory that makes the first day of Group C close as the first after the draw between Egypt and Spain (0-0).

Incidents: Match of the men’s soccer competition of the Olympic Games played at the Sapporo Dome stadium. No viewers due to coronavirus restrictions.