Apple is still “a mobile company” and the launch of the iPhone 12 has been a sales explosion in the last quarter of 2020, according to Gartner data published by our colleagues at MCPRO.

The Cupertino firm sold 79.9 million iPhones in the quarter for a year-on-year growth of 14.9%. More importantly, it is a relevant fact that has not happened since 2016: Apple overtook Samsung for sale of smartphones. And for quite a distance. Samsung fell 11.8 percent and was “only” able to sell 62.1 million handsets during the fourth quarter of 2020.

Another of the great winners of the period was Xiaomi. The fastest growing of all mobile providers selling 43 million units for a 33% rise. Huawei, along with Samsung, was the big loser of the quarter and of all 2020. The company has collapsed after Trump’s blockade in the United States and the consequent lack of technological supply from US companies, hardware, and also software.

It is clear that today the survival of a manufacturer that works with Android is greatly complicated if it does not use Google services. Just add another piece of information. OPPO also outperformed Huawei in the quarter and relegated Huawei to a fifth position unknown to the manufacturer in recent years. 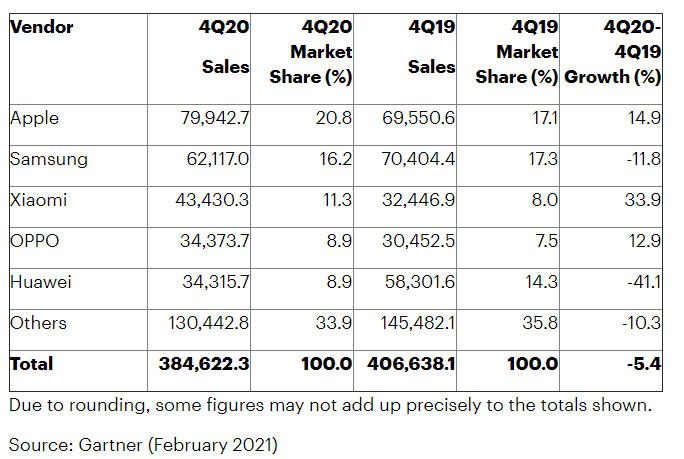 Regarding the 2020 annual global, Gartner estimates a fall in the sale of smartphones much higher than the data of the other large consultancy, IDC. A 12.5% ​​year-on-year decrease to total 1,347 million units. The ‘green shoots’ of the last quarter were not able to compensate for the great fall of previous quarters where, in full confinement, consumers chose to buy laptops and not renew their mobiles.

By manufacturers, Samsung continues to lead and we do not believe that its dominance is in jeopardy although Apple has approached by the takeoff of the sale of iPhones in the last part of the year. Huawei maintains the third position, but continues to be heavily pressured by other Chinese manufacturers such as Xiaomi and will have to solve the big problem posed by the US blockade If the new Biden administration considers it … 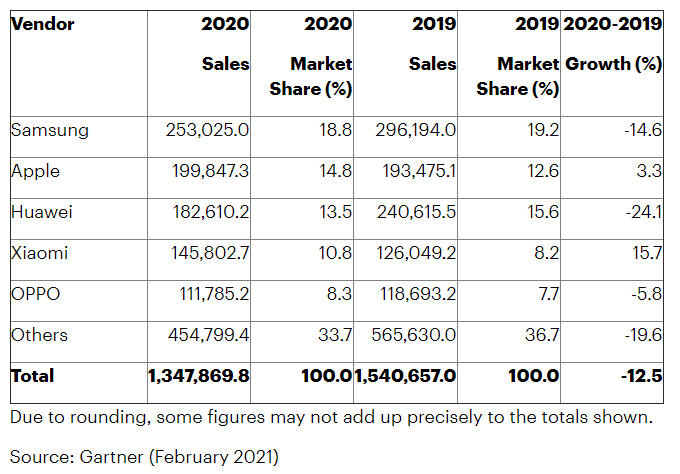 By 2021, the consultancy is confident that the “democratization” of 5G with the launch of a good number of mid-range terminals with support for these networks, will be able to boost sales, together with the suppressed demand of 2020 and a lack of components hardware that has gripped the entire technology industry.