Apple M1X is the new SoC that Apple is developing to power its new generation of personal computers. And point to a significant increase in graphics and process performance.

Apple surprised the industry with the M1, the first SoC to transition from Intel’s x86 architecture to ARM under the silicon project. A movement that had been talked about for a decade, almost since the launch of the original iPhone, but that arrived like a cyclone and with an unexpected level of performance and effectiveness.

The results of its CPU both in single core and in multiple threads are the highest that have been seen in client computers under an ARM architecture that until a few years ago had been reserved for mobile devices such as smartphones or tablets. Also its GPU reached a good level considering that it is an integrated graphics.

Although it is difficult to compare performance levels between different architectures and there are sections where this ARM chip cannot go, the general opinion is that Apple had done a good job to start. It is not surprising since Apple is one of the companies with the most experience with ARM since it was involved in its development in its beginnings as Acorn Computer in the 80s and the own designs that it has produced so far for its mobile devices have been able to outperform major semiconductor specialists such as Qualcomm or Samsung.

Of course, Apple has work ahead to solve sections such as running applications and increasing the performance level to be able to move ARM to more powerful machines than laptops, iMac Pro and especially Mac Pro workstations.

How will the Apple M1X

The first leaks speak of an SoC that would maintain the 5-nanometer technological process and the hybrid architecture (big.LITTLE). I would have a 12-core CPU, eight high-performance Firestorm and four focused on energy efficiency Icestorm, working at a frequency of 3.2 GHz and with 28 Mbytes of total cache. The 12 cores represent a 50% increase over the eight cores (4 + 4) of the original M1.

The GPU would get an even bigger update, with 16 cores and 256 execution units, which is exactly double what the M1 includes. The higher level of performance will cause an increase in consumption of the Apple M1X up to 45 watts of TDP. Support for RAM memory will also increase and it will be able to handle 32 Gbytes LPDDR4X-4266. 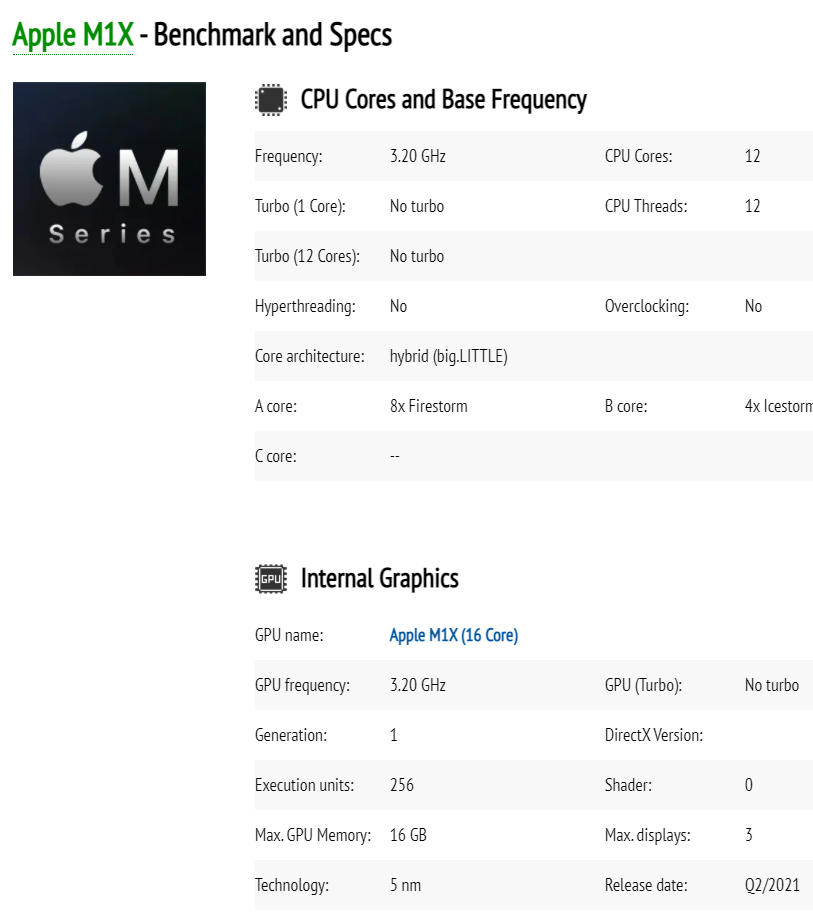 The Apple M1X will be used in the Mac of 2021 and in particular three teams are mentioned: MacBook Pro 14, MacBook Pro 16, and iMac 27 AIO. At the moment, the top of the range such as Mac Pro that use Intel Xeon processors and dedicated NVIDIA Quadro professional graphics would be left out. A configuration that we envision is impossible to replicate right now with ARM architectures.

Apple took time and announced that the silicon project would last three years. It remains to be seen if you will not have to leave out some machines and continue to use the Intel x86. In any case, the development to bring the ARM architecture to PCs continues apace and the information coming from the new chips is promising.