The sun was still not very hot in Cupertino when Craig Federighi began to answer the email of John Stauffer, an Apple executive who had proposed a curious idea. According to him, an idea: that of create a streaming platform from which you can stream Windows games to your Macs but also Apple applications, such as Final Cut Pro, to other platforms.

Federighi answered him with a forceful “no”, and showed that their focus was still on betting on increasingly powerful chips for their smartphones and also seemed to talk about the transition to M1 chips already then when mentioning the code name of the “Olive” project. That stance seems immovable four years later, and we wonder if Apple will seize the opportunity offered by the M1 and their successors for gaming on their Macs.

Final Cut Pro running in your browser, that was the dream

That email was part of the documents that were exposed in Apple’s lawsuit against Epic in recent weeks. There is a lot of revealing data that has come to light thanks to that trial, but now we know this other that shows Apple’s position on streaming games and applications. 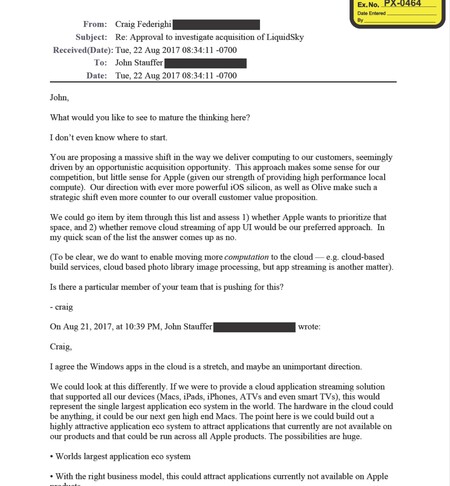 Stauffer proposed the acquisition of LiquidSky, a company that at that time posed a rival to GeForce Now and PlayStation Now. They ended up disappearing, but for that manager the acquisition could “represent the largest ecosystem of applications in the world.”

The idea was to go beyond what Stadia or xCloud now offer: Windows video games (even AAA titles) could be streamed to Macs and thus provide them with that capacity, but also for Stauffer that platform it would also allow that to use Final Cut Pro (for example) you would not need a Mac, but just a browser.

The idea is eye-catching, but Federighi made it clear that it would represent “a massive change in the way we offer computing to our customers.” For him that strategy made sense for its competitors “but little sense for Applegiven our strength in providing high performance in local computing. “

Will we see a Mac for gamers?

Federighi’s position certainly seems to be consistent with what has been shown in Apple in later years. in the field of gaming and hardware.

The Cupertino company is doing great with mobile video games, but Macs are still the big forgotten in a segment that it is a gold mine for its competitors but that curiously in Apple they seem not to take into account.

In fact Apple has made things very difficult for Stadia and xCloud, and only Amazon Luna managed to launch successfully on iOS devices thanks to a “shortcut.” Microsoft already offers a beta that follows the same strategy for xCloud, and that should make it possible for macOS users to take advantage of these platforms as well.

If we pay attention to that email from Federighi and those ideas are maintained (something quite likely), Apple will not give open support to this option, and the question is what will happen to gaming on Macs now that the transition to M1 chips has arrived.

These chips feature pretty decent GPUs that allow you to enjoy games that are not too demanding, but it is that there is already talk of the future M1X or M2 chips – if those are their final names – that instead of GPUs with 8 cores will have 16 cores.

And I eat that little, because for months now there was talk of future chips with up to 128 cores, something that would offer a really spectacular graphic power.

That graphical power would support Federigui’s argument for “local computing” (no streaming), and perhaps it would raise a boost for gaming on Macs. Even so, Apple’s ambition in this area seems null., and that graphic power may simply be destined for the creative realm.

The possibilities seem of course almost endless for this new family of chips and even for projects like the one that talks about future virtual / augmented reality glasses. Another thing is that Apple wants or not to take advantage of them.