Home>Tech>Apex H2, this is the most futuristic Segway motorcycle with hydrogen fuel cell

Segway triumphed at the time for its particular micromobility vehicles that are not even manufactured today. Now that the company has been acquired by Ninebot, they have begun to develop other more conventional products, such as electric scooters or even electric motorcycles. The latest to join its catalog at the moment is a concept, but a spectacular fuel cell motorcycle concept.

The company has unveiled what they hold is the future of motorcycles: a futuristic motorcycle packed with neon lights and powered by a fuel cell. It is called Apex H2 and it is not in vain, since the original Segway Apex was presented in 2019.

According to Segway, the motorcycle will have a power of 60 kW (80 hp) that e will allow you to accelerate from 0 to 100 km / h in 4 seconds. Likewise, it will achieve a maximum speed of 150 kilometers per hour.

What there are no details yet is the autonomy that this motorcycle would have. What is known is that it will come with a hydrogen fuel cell. This stack in principle can be easily exchanged For a loaded one, it remains to be seen what is the infrastructure and external network that they install so that this is comfortable and fast. 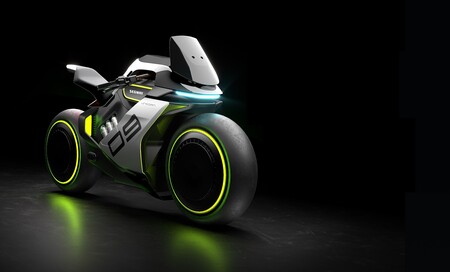 The motorcycle, in principle, have plans to manufacture it and put it on saleEven though we haven’t seen the original Segway Apex on the market yet. Segway-Ninebot promises a price of around 9,000 euros for it and deliveries within two years, in 2023.

The price, although at first it may seem high, is relatively low if we take into account the promise of coming with a hydrogen fuel cell. Anyway, the rest of the specifications and performance that the motorcycle can have remains to be seen.

Today who else seems to bet on the market for electric motorcycles is the manufacturer Zero, one of their latest creations is the SR / S, capable of reaching 200km / h. Another futuristic one is the Verge TS and its wheel without hub. For the most classic there will always be the electric Harley or the peculiar Spanish OX One.