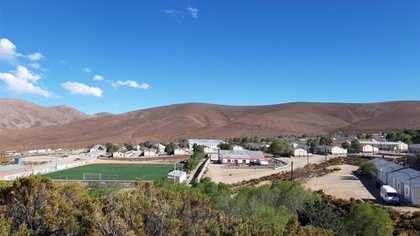 A mining company from Jujuy owned by Glencore announced on Monday the closure of its doors in a decision that was accelerated by the sanitary conditions in the northern province. The company said in a statement that despite the nearing end of the mine’s production phase, it had plans to maintain production for a limited time, something that was truncated by the restrictions on circulation that govern in the midst of the pandemic of coronavirus covid-19.

Compañía Minera Aguilar is owned by the multinational Glencore, which, among other investments, is a partner in part of the business of the agro-exporter Vicentin in Renova. Glencore also operates Minera Alumbrera in Catamarca.

In July 2005 the firm joined Glencore and has more than 600 employees. It produces lead and zinc in the province of Jujuy. It is a pioneer company in Argentina in the field of mining, since it is the oldest in activity with more than 90 years.

Although its operational continuity was foreseen for a short period, the current health condition has forced the advancement of this determination

Through a statement to which he had access ., Compañía Minera Aguilar announced the closure of its plant, which was already undergoing a “phase of care and maintenance of mining operation” in the province, due to the natural decline of its mineral resources such as zinc, lead and silver, which reached maturity later 91 years of uninterrupted operation.

“Compañía Minera Aguilar announced today that it will enter a Care and Maintenance stage of its mining operation in the province of Jujuy. The zinc, lead and silver deposit has reached maturity due to the natural decline of its mineral resources, after 91 years of uninterrupted activity. The productive mining cycle culminates due to the set of geological, technical and economic conditions that have been combined in recent years ”, said the company.

“Today is a very sad day for all of us who value this mining undertaking that has been a part of our lives for many years, but which, unfortunately, has inexorably reached the end of its productive stage. Although its operational continuity was foreseen for a short period, the current health condition has forced the advancement of this determination“, Held Guillermo Apraiz, president of Minera Aguilar, in the statement. 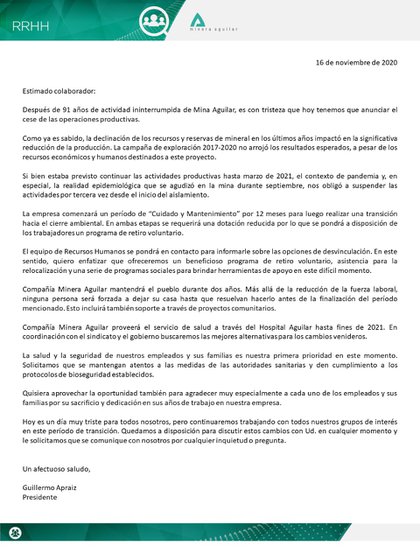 The letter that Compañía Minera Aguilar sent to its employees

The Jujuy governorate highlights that all mines have their beginning and end, and that there is a drop in production despite the fact that the province enabled new exploration areas. In addition, they announced that tomorrow he is going to meet with the company to analyze an “exit plan” and recognized that behind the closure there are as many macroeconomic reasons for the difficulties in importing inputs as all mining companies have, but that in any case it is the water that filled the glass. That there are structural reasons, such as the drop in production and production costs, because the mine is underground and when you go back it goes, production becomes more expensive. It has almost 100 kilometers of gallery inside the mountain; a.

In June of last year they had decided to invest heavily for the next three years, regardless of the age of the mine.

Now, for the hundreds of employees that the company has, a separation process has begun with different alternatives.

“After the Care and Maintenance period, which will have an extension of 12 months, Compañía Minera Aguilar will implement a transition towards the environmental closure of the deposit. In both phases a reduced number of workers will be required. For this reason, the company will open a program of voluntary retreats “, detailed the company.

“Compañía Minera Aguilar will provide its workers with tools that contribute to providing containment in this situation. The company has a consolidated Community Development Program, which will be deepened and expanded to respond to the needs of workers and communities in pursuit of future challenges, “he added.

In another communication, addressed to its employees, the firm promised to maintain health and housing services for a limited time, in addition to explaining the rationale for the closure.

Although production activities were expected to continue until March 2021, the context of the pandemic and, especially, the epidemiological reality that worsened at the mine during September, forced us to suspend activities for the third time since the start of isolation

“As is well known, the decline in mineral resources and reserves in recent years impacted on the significant reduction in production. The 2017-2020 exploration campaign did not yield the expected results, despite the financial and human resources allocated to this project. Although production activities were expected to continue until March 2021, the context of the pandemic and, especially, the epidemiological reality that worsened at the mine during September, forced us to suspend activities for the third time since the isolation began ”, detailed the text.

“We will offer a beneficial voluntary retirement program, relocation assistance and a series of social programs to provide support tools in this difficult time. Compañía Minera Aguilar will keep the town for two years. Beyond the reduction of the workforce, no person will be forced to leave their home until they decide to do so before the end of the mentioned period. This will also include support through community projects, Compañía Minera Aguilar will provide health services through the Aguilar Hospital until the end of 2021 ”, added the letter for employees.

From the local Glencore subsidiary, meanwhile, they detailed that the objective is to make a transition from the operation to a period of “Care and Maintenance” and then begin the environmental closure. “We will retain a workforce of approximately 180 people for the beginning phase and rehabilitation activities. The rest of the endowment – approximately 460 people – will receive the offer of a voluntary retirement package with conditions that we understand are attractive, assistance to relocate and a series of social programs to provide support tools. In general, the company will continue to support the community for two years until December 2022 inclusive ”, they assured.

Glencore has several departments that operate in Argentina, but the Aguilar Mine is the only asset that the Zinc Department operates in the country. Globally Glencore has a 50% stake in Glencore agriculture (which is another company).

Markets: the world’s stock markets celebrate the advances of another vaccine and boost Argentine stocks up to 9%

The Government activated the Gas.Ar plan: they seek to guarantee a price for the production of natural gas to replace imports

Property prices: it takes 27 years of wages to buy an apartment