The list of exotic species that invade Spain does not stop growing. Ants, for example, already have a good number of species alien to Spanish ecosystems that have settled in them for years. It is a number that is growing, since it has gone from a few exotic ant species to more than twenty, of which at least seven can cause annoyances or damage to other species, ecosystems and even people. In Spain about 300 species of ants are known in total. One of the latest invasive ant species to be implanted in Spain is the so-called ‘crazy ant’ (Paratrechina longicornis). Its expansion process appears to be slow and irregular, but it has taken a qualitative leap with its recent location in Barcelona.

Three Spanish scientists, Xavier Espadaler, Carlos Pradera and Roger Vila, have published an article in the Iberomyrmex magazine, edited by the Iberian Association of Mirmecology, in which the detection of the ‘crazy ant’ in the port of Barcelona is confirmed throughout 2019 and 2020 during pest prevention work at port facilities.

Not only was this species found, but also yet another that had never been cited anywhere in the Iberian Peninsula: Lepisiota melas, equally invasive.

Although this last species is considered a true find by experts, it is worrying that more and more Spanish towns are where the ‘crazy ant’ is found. In fact, last November it was also located in the Axarquía region of Malaga, the second place in this province where it is located.

The authors of the study point out that the port of Barcelona is a favorable point for the entry of exotic species to Spain, as they are accidentally transported by ships and merchandise.

The crazy ant, in Spain

Experts explain why this species is problematic. It is a Opportunistic, predatory and scavenger ant, which feeds on live or dead insects, honeydew, seeds or fruits.

For this reason, it also invades homes, looking for food scraps. It is a very adaptable ant, since it lives in both dry and humid environments, although it prefers warm environments. Their nests, difficult to locate, are often in wall or wall crevices, under stones or in other constructions.

The country of origin of the species is not known and, although the genus Paratrechina comes from tropical regions of Asia and Oceania, some authors estimate that its place of origin is Senegal.

As with other invasive species, its introduction in Spain must have been accidental, through trade and freight transport. In Spain it was located for the first time in the port of Almería.

Its environmental impact is that it manages to occupy the territories of other native ants, as well as other invertebrates. It also has an economic impact, since if it becomes an agricultural pest, it protects insects that are harmful to crops, such as sucking hemiptera, mealybugs, aphids and others, which it helps to spread.

The control of their populations is achieved through the use of specific toxic baits. The company specialized in pest control Anticimex offers the following list of ant species, both exotic and native, that can be harmful in Spain.

Other exotic species that cause damage or annoyance in Spain:1.Linepithema humile (Argentine ant). Native to South America. It is introduced into houses in great numbers. In some regions, such as the Mediterranean coast, it is a very persistent pest.

2.Lasius neglectus. Native to Turkey or Asia Minor. Present in Catalonia and Tenerife. In some localities it is introduced into houses, causing serious damage due to its attraction to electrical elements such as plugs or connection boxes.

3.Monomorium pharaonis (Pharaoh Ant). Native to tropical areas of Asia. Despite being an invasive species widely spread worldwide, its presence in the Iberian Peninsula is rare and rare.

4.Tapinoma melanocephalum (Ghost ant). Native to humid tropical areas. As with the pharaoh ant, the occurrences of this species in Spain are very rare and sporadic.

5.Monomorium carbonarium. Originally from Madeira. In 2013 its presence was detected in a house in Castelldefels (Barcelona). Its presence is very scarce and sporadic in Spain.

6.Pheidole megacephala (Lioness ant). Invasive species native to tropical Africa. It has only been found occasionally in the Canary Islands.

7.Hypoponera punctatissima (Roger’s ant). Exotic species native to Africa. Very scarce in Spain, where its presence is rather sporadic. Cited in the center, south and north of the Peninsula. 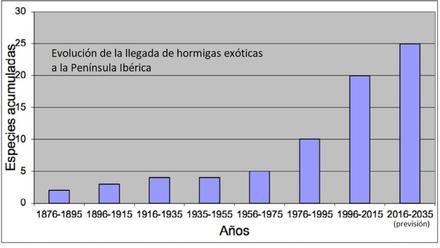 The evolution of the exotic species of ants in Spain

Native species that cause damage or annoyance in Spain:

2.Crematogaster scutelaris. It is a great pest in cork oak forests because it nests in the cork bark. Its introduction in buildings is not very frequent, but it has been seen nesting in houses on some occasions.

3.Tapinoma nigerrimum. It does not usually enter houses, but it is an important pest in gardens, terraces, and parks.

4.Lasius niger / Lasius grandis. It is not a problem in homes, but it is a nuisance in gardens due to its fondness for the sugary secretions of mealybugs, whiteflies, aphids and other pests, which see their populations increased thanks to the protection they receive from ants.

5.Plagiolepis pygmaea. It is not a problem in houses, but it is a nuisance in gardens and terraces.

6.Tetramorium caespitum (Pavement Ant). They do not usually enter houses in large numbers. They are a problem in terraces or gardens since they can nest on pavements, sidewalks or cemented paths.

It may interest you: The ‘killer wasp’ spreads across Spain at high speed

It may interest you: Climate change triggers pests, which already destroy 40% of crops