The Sanse will have the honor of opening the season in Anoeta the August 14 against Leganés (5pm) And, so that the stadium is beautiful in two weeks, the txuri urdin club works against the clock in the works that it is carrying out in the bowels of the same, which fundamentally affect the changing rooms, the press room, and the tunnel access of the players to the field.

The works are well advanced but there is still work to be done and there is no time to spare. In the new house of the Real, For example, you can already see the large shield that will preside over the team sanctuary, in which the players will sit in a ‘U’, around it. In addition to the booth itself, which will have the more modern materials and television screensAs usual in the new stadiums, an office for the technicians, a physiotherapy room and a warm-up room have been built in which the pulleys, mats or stationary bikes that have been so common in the stands will be located, in this time of football without fans in the stadiums. In front of the changing room, next to the showers, there is a recovery pool in which they will immerse themselves at the conclusion of the matches. The stadium will also add a new kitchen in which the Real will eat on match days. 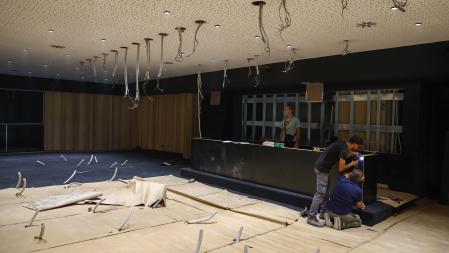 The club also finalizes the works in the new press room that will maintain its location but placing the attendees in an arch around the stage in a serious and elegant atmosphere. Next to it the new mixed zone will be located. Both the press room and the mixed zone will be equipped with large windows onto the pitch and will have all the necessary infrastructure and technology.