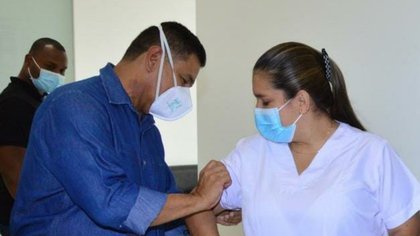 The Ministry of Health confirmed that next week a second batch of vaccines will arrive in Valle del Cauca that would register a number of 4,500 doses to immunize the population belonging to phase 1 of the Vaccination Plan against covid-19. The announcement caused a stir among the mayors of the municipalities near Cali, the capital of Valle del Cauca, because so far none of the people belonging to the health personnel of the neighboring sectors has been vaccinated.

The mayor of Palmira, Óscar Escobar, called on the health authorities to take into account the municipalities of the department, since they also need to vaccinate the doctors who work in the hospitals of these places, who have faced the virus in their work, but they have not taken them into account during these first days of vaccination.

However, the response of the department’s health secretary, María Cristina Lemes, was not what the mayors were waiting for, including that of Palmira, the woman said that, for the moment, these sectors of the city will not be taken into account Well, the 4,500 biologicals that will arrive will stay in Cali.

“You have to have a little patience, we are in contact with the IPS of Palmira, Buga, Tuluá and Cartago, which are the intermediate cities where we have intensive care units. There is a vaccine for everyone, but we have to learn to wait … “ Lemes commented.

The response caused outrage among the mayors of the municipality, who confirmed that they will meet to ask that this decision be evaluated and that all the work that the municipality’s doctors have done be taken into account.

So far no exact date is known when the second batch of vaccines will arrive at the department.

The governor of Valle del Cauca, Clara Luz Roldán, reported the new modifications in the restrictive measures that were in force in this department, to the southwest of Colombia for the reduction of infections by covid-19.

The governor indicated that the measure of ‘pico y cédula’ is raised in the Cauca Valley, which represents that citizens will be able to enter commercial establishments, restaurants and gastrobars without restrictions regarding the number of their identity card.

Likewise, Clara Luz Roldán, indicated that the night curfew measure will continue, however it will no longer apply from 12:00 pm as it had been established from the beginning, but will start from 1:00 am to 5:00 : 00 am with the intention of generating a balance between the economic reactivation and the health of the department.

These measures will be stipulated through a decree prepared by the Department’s Governor and will apply to 40 municipalities in Valle del Cauca with the exception of Cali and Buenaventura, as they are special districts.

“The dry law has not been decreed because it is not possible for a person to go to a restaurant and not have a glass of wine or if we want to open the bars we cannot prohibit it either. We have always been in a balance, taking care of the health of Valle del Cauca, but also protecting economic measures so that many businessmen are not going to continue to bankrupt us as has happened to those businessmen that we now intend to reactivate ”, Clara Luz Roldán assured.

The 192 thousand doses of the pharmaceutical company Sinovac arrived in Colombia: this is how they will be distributed After a week adrift in the Pacific, they rescue three Ecuadorians in Colombian waters