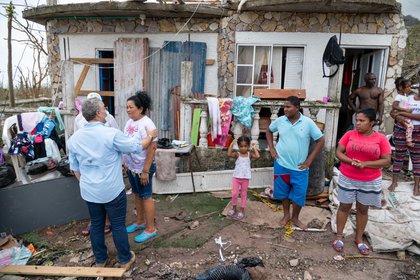 The island of Providencia, which belongs to the Colombian archipelago of San Andrés, was devastated by Hurricane Iota, leaving 98% of the island’s infrastructure affected.

This Tuesday, President Iván Duque arrived at the scene and confirmed the terrible conditions on the island. In addition, the president spoke with the community and met with his government team to define the reconstruction plan for the area.

“We will be deploying all the capacity of the National Government, the Navy, the Army, our team of first responders, the Ministry of Health, to attend to, evacuate some of the wounded and have an immediate response capacity”, stated the head of state.

On the other hand, in the last hours the anguishing accounts of those affected by the natural catastrophe, which so far has left one dead, were known.

One of the citizens stated that strong winds were approaching with speeds exceeding 170 kilometers per hour, with roofs flying through the air and absolute desolation.

“The pod is starting to paint bad, okay, and it’s raining hard and a strong breeze is coming in. Over there I heard that roofs are flying around here, okay; by the force of the winds, okay, and that hurricane Iota has not made landfall yet in Providencia. It is predicted that it will enter around 12 or one in the morning, with winds of 175 kilometers per hour and it may touch land continue to rise in category “, added.

Likewise, Mateo Posada, one of the tourists who were in Providencia, reported details of the impact and damage in the area after the passage of Iota.

Posada, who managed to reach San Andrés safely, said that he took refuge in a bunker at the hotel where he was staying.

“All Providencia is destroyed, all houses and vegetation are destroyed. Colombians have to unite so that they feel that they are part of a family because they have lost everything ”, Held.

Adrián Villamizar, pastor of the Baptist Church of Providencia and who was evacuated in an Air Force plane, related the distressing moment in the same way.

On the other hand, this Tuesday, in the morning hours, the former mayor of Providencia Bernardo Bent recounted the devastation left by Hurricane Iota in the region. According to Bent, there is only desolation, houses on the ground and its inhabitants, due to the magnitude of the damage, have nowhere to sleep.

The former president of the island assured that he managed to speak with a friend who is in the area, who gave him details of the tragedy that occurred.

“I was able to talk with a friend, fortunately by satellite communication, and he is seeing how he goes around the island, but it is quite difficult because there are many trees, a lot of debris and the roads are completely covered; so, since six in the morning he has only been able to travel two kilometers “Bent declared.

How to access humanitarian aid for the rainy season

What Disney + plans to do in Colombia