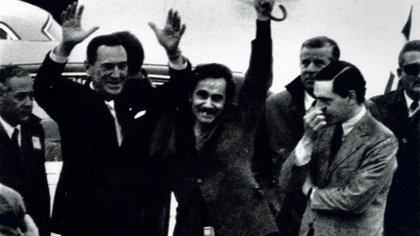 The Secretary General of the CGT, José Rucci, protects the newly arrived Justicialist leader, Juan Domingo Perón, from the rain

On November 17, 1972, Perón returned to the homeland after 17 years of exile and ban. Intolerance is the word that explains those years of coups, restricted democratic openings, imprisonment of Peronist militants, union intervention and executions.

The historical blindness of the ruling classes reached the absurdity of believing that with a decree that prohibited naming Perón, singing the march or having a picture of Evita in the kitchen, it would be enough to root out a movement that lived in the heart and the soul. historical memory of the Argentine People. That was Decree 4161 of 1956, a true monument to clumsiness.

The truth is that a certainty was imposed: it was inconceivable to think of a country outlawing the majority political movement. Peronism, outlawed, had attempted agreements with other electoral forces. He had also rehearsed the blank vote and a permanent resistance policy in the streets led mainly by the labor movement. There was, however, a decisive fact that explains the turn of events, and it was the massive incorporation of young people into Peronism in a wonderful amalgam with the old Resistance cadres.

Many of those who had applauded the coup of ’55 understood that it was truly a tragic event that only brought pain and misery to the Argentine people. And that is why they joined Peronism without further ado, giving new life to the old desire for the return of General Perón to the Homeland.

And that’s what happened. Perón returned to the homeland and starred in the remembered hug with Balbín, also announcing that for an Argentine there was nothing better than another Argentine, modifying the old apothegm for a more comprehensive look at the new situation that required a policy of agreement between different social sectors . Perón was the great architect of the Social Pact signed between the CGT and the CGE, designed to temper inflation, safeguard the purchasing power of wages and enable an investment horizon that would set in motion an economy battered by long years of mistakes.

Perón’s lucidity was not accompanied by his health. A year and a half after his return, he would enter eternity. Y the attempt to mend wounds, to settle old disagreements, to hatch consensus agreements on the basis of common understandings, was truncated. His disappearance was a tragic event. 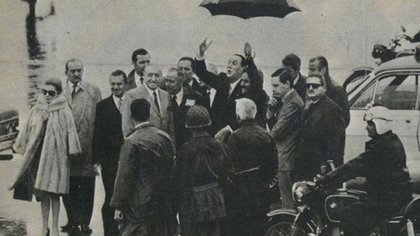 Attempts to resolve the problems of political representation outside of politics have always failed. The proscriptions, the judicial persecutions and the policy of systematic insult never illuminated anything positive. In any case, they gave rise to the opposite effect of the one sought: the persecution unleashed in ’55 awakened thousands of consciences that alluvially joined the proscribed movement, the injured movement, the persecuted movement.

Reflecting on History is reflecting on the present, it is investigating our memory to find references that allow us to make the best decisions in the here and now. The return of Perón to the Homeland is the best synthesis of 17 years of resistance and loyalty to a leadership and a doctrine. And it is also an invitation to reflect on their unfinished dream of uniting Argentines at the table of a great consensus on the central issues that make a country that claims to be such.

I see parallels between that circumstance and the present. Today, in the framework of a pandemic that altered all world economic variables and that produced the largest recession in decades, it is imperative to strengthen politics by building structural agreements and consensus at a large table of dialogue and agreement. If we continue down the path of permanent grievance, it will be difficult to illuminate those consensuses.

The world is close to having a vaccine and it is then possible to envision a strong reactivation. If we offer conditions of sustainability to this reactivation or rebound, we will be in a position to think about a new growth cycle that can continue over the years. But of course, it will not be with automatic pilot as we will generate these conditions but with the signing of a new political, economic and social contract to face the recovery. This is not a call to strengthen the government. It is a call to strengthen the State and make it a strategic ally of the productive sectors that want to invest, generate wealth and boost the domestic market.

Structural problems are not solved overnight, they take time. But someday we have to start, without putting off until tomorrow what we need to do today.

We are all the Homeland. The Homeland is the house that shelters our dreams and hopes, ours and those of future generations. We need to get back on our feet, regain the strength and the spirit of sacrifice that once made us feel proud to be Argentine. It is not impossible to think about getting out of stagnation and recovering the economic and social dynamics that made us have a middle class that was the distinctive sign of Argentineanness. Economic problems exist, but it is possible to face them from politics. I am not saying from politics but from politics conceived as the art of making the impossible possible to come true.

November 17 is the synthesis of the unshakable will of a people, it is the victory of politics over injury and force. Today we need politics more than ever: to talk, to agree on an Argentina that contains us all. That was, neither more nor less, the desire of Perón who always dreamed of returning to his homeland to make it come true.