We analyze in Cinemascomics the Special Collector’s Edition of Akame ga Kill! on Blu-Ray, with the complete anime series in a special A4 box

In Cinemascomics we have analyzed the domestic edition of the Collector’s Blu-Ray that brings together the entire story told in Akame ga Kill!, an anime created by Takahiro and Tetsuya Tashiro [Gangan Joker (Square Enix)], where the series has had Tomoki Kobayashi (Chobits) in the director’s chair and with Makoto Uezu at the controls of the scripts. This one-season, 24-episode series is considered a cult play, with a frenetic pace and not a single filler chapter.

The Japanese animated series is now available for the first time in a bundle pack, containing 3 50GB Blu-Ray discs, which includes all 24 episodes of this epic and exciting anime from the White Fox studio, responsible for RE: Zero and Goblin Slayer, and produced by Square Enix.

The series is a Japanese production and is available with the dialogues in both the original Japanese version and dubbed into Spanish (Audio 2.0 DTS HD), as well as including Spanish subtitles. However, it does not have sound tracks in its audio in other languages ​​spoken in our territory, such as Basque, Galician, Valencian or Catalan. The video quality is in 1080p and 16/9.

In this way, we are going to analyze the Blu-Ray Special Collector’s Edition pack, a limited edition and numbered to 500 units, which brings together from chapter 1 to 24 (as well as 24 funny shorts), with a total duration of 624 minutes, which Selecta Visión has launched in our country. We hope you enjoy the chapters as much as we did, based on the epic action-packed story. In this way, we have set to work to discover everything that this domestic edition hides. So, we have analyzed the extras of this unique edition for anime lovers, being a co-production between the Japanese studios White Fox and Square Enix.

Tatsumi decides to join the revolution as a member of the Night Raid, a vigilante gang made up of women as beautiful as they are deadly. Tatsumi is a young man who dreams of joining the imperial army to achieve fame and glory; and, once he earns a decent salary, to be able to help the villagers of his hometown out of poverty.

But before that happens, he is rescued from a fate worse than death by Night Raid, a gang of assassins that terrorizes the empire and that fights for the freedom and equality of all citizens, regardless of their origin or wealth. It is thanks to them that he opens his eyes and discovers that things are not what they seem from the outside. He will soon realize that the capital is a nest of corruption and degradation that abuses the people, while Night Raid assassinates to protect the underprivileged as the spearhead of the dreaded revolutionary army.

From this moment on, Tatsumi joins the bloody revolution as a new member of Night Raid, among which Akame stands out, the cold bearer of Murasame, the murderer of a cut, one of the 48 feared and powerful Imperial weapons that can unbalance the final battle.

Set of 6 spots for Japanese television that promote the series, highlighting its lack of censorship, dubbing cast, technical equipment and plot advances.

24 Short films in the series, which parody the story and the characters in a humorous way, as the plot progresses and one per episode.

9 exclusive plates, printed on special paper, A4 size and in full color, with the members of Night Raid: Akame, Tatsumi, Mine, Leone, Sheele, Lubbock, Bulat, Najenda and Chelsea.

Special and exclusive notebook of the series, consisting of 160 pages of A4 size, with complete and detailed information on the series. Includes index, descriptions of the protagonists, highlights of the members of Night Raid, descriptions of secondary characters and members of the Empire such as the Three Beasts, the Prime Minister, the Emperor, Esdeath, Kurome and their puppets, Wave and the rest of the members of the Jaegers. All characters – main, minor and occasional – feature a commentary from Kazuhisa Nakamura, Character Designer.

But they also tell us about the history of Night Raid, the Empire, the Path of Peace, the dangerous beasts, the Jaegers, the 48 imperial weapons with their whereabouts and known bearer. It continues with sketches of the main characters and locations.

Finally, we can see a synopsis of the 24 episodes, a description of occasional characters, the technical and artistic file with the credits, a complete cast of Japanese voices and two illustrations with both sides.

Finally, let’s hope you enjoy purchasing the Akame ga Kill! Special Collector’s Edition Blu-Ray, complete with the complete series, also available on DVD and basic Blu-Ray edition; to take it home and watch its chapters as many times as you want, both in the original version with subtitles and dubbed into Spanish. You can find it at this link. 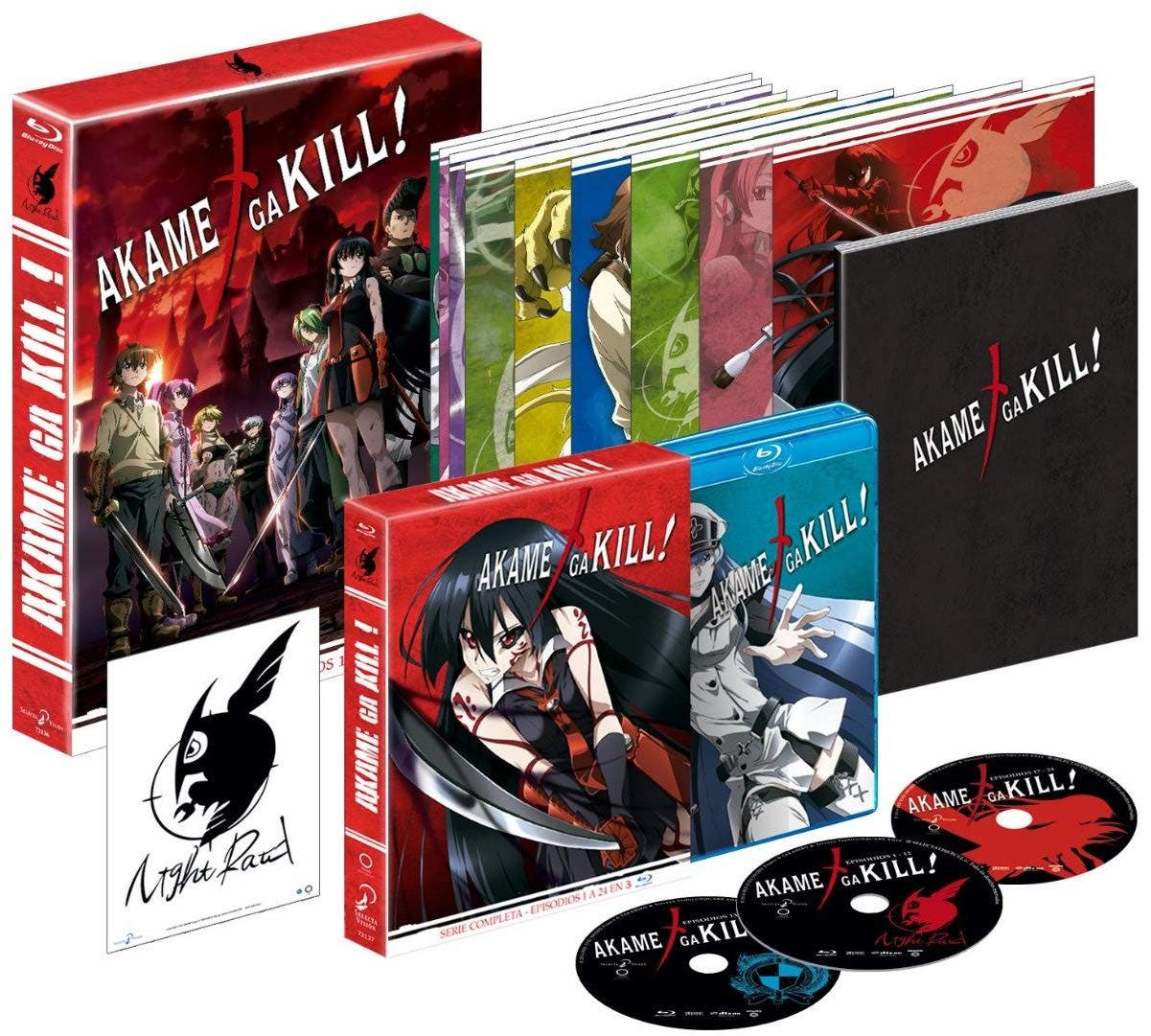 Description : Tatsumi is a country boy who comes to the capital of the Empire to enlist in the army with the intention of quickly rising, making money and saving his people from starvation due to the large taxes they have to pay. But when he arrives in the city, he realizes that not everything is as he expected. After witnessing a horrible massacre carried out by the corrupt inhabitants of the empire and the death of his friends, he decides to join the Night Raid, a division of the Revolutionary Army that opposes the empire, which is dedicated to intelligence management in the capital and leads carried out murders requested by the organization.