Audi already has its rival for the Tesla Model S and Porsche Taycan, it is called Audi e-tron GT and we have already tested it. With this launch, the German manufacturer is fully involved in the fight for large electric sedans, offering high performance, a lot of technology and prices in line. Competing with the best electric cars of the moment is not easy, but in this 2021 Audi e-tron GT first video review, we are going to discover you How Audi has managed to create a car capable of standing up to Tesla and Porsche, and also to do it by winning the game in some aspects. We started!

The Audi e-tron GT shares many elements with the Porsche Taycan, yet manages to look and feel different

The Audi e-tron GT is not Audi’s first electric car, but it is the electric that aims to be a before and after in the history of the brand and in its current range. Based on the same J1 platform that launched the Taycan, we are before the maximum technological showcase of the Volkswagen group, offering the latest from the German giant in terms of powertrains, batteries, infotainment, design and materials. The aim of the e-tron GT, therefore, is to become a window into what the Audi to come will look like in design, powertrain and technology. 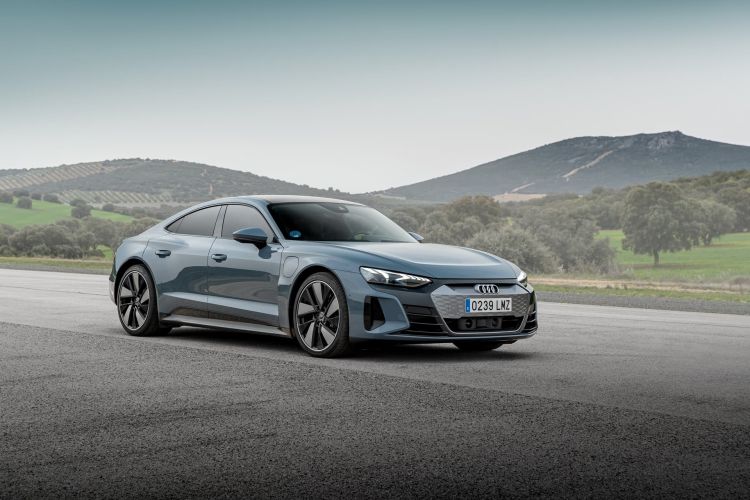 In stylistic terms, I think I am not wrong in saying that we are facing one of the most beautiful Audi in recent history. It is true that it raises a philosophy very similar to that of the Audi A7 Sportback, but the e-tron GT goes a step further in character and muscle to turn its 4.99 meters long into a truly striking and sporty car. Inside, on the other hand, we do not see that clear differentiation with respect to the rest of the range, but quite the opposite. Audi has created a cabin for the e-tron GT in line with its entire product range, offering a outstanding quality, a great splurge on technology, but missing that point of personality that the exterior does offer. And what about its direct rivals Porsche Taycan and Tesla Model S, since we perceive interesting differences, differences that we encourage you to discover in depth throughout the video that you have above. 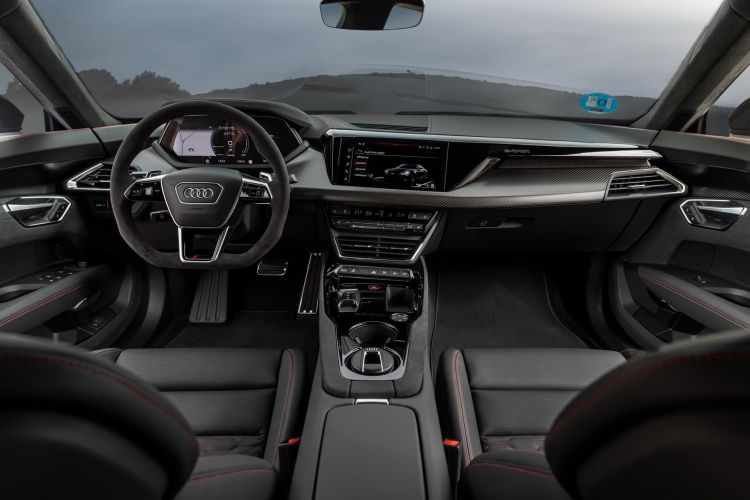 But It is in the technical section where the Audi e-tron GT stands out the most, and obviously rightly so. We are facing an electric car designed to shine in performance, comfort and behavior, and we already anticipate that it complies with a note in all three aspects. During this first contact organized by Audi Spain in Madrid, We were able to test both the e-tron GT, and its sportier version RS e-tron GT. In the first case, we find a scheme of double electric motor capable of offering 476 hp (530 peak hp) and 630 Nm, while in the case of the RS e-tron GT, the combined power of both engines is 598 hp (646 peak hp) and the maximum torque is 830 Nm. Both configurations are powered by a battery with a net capacity of 85 kWh, certifying a WLTP autonomy of 487 and 472 km respectively. 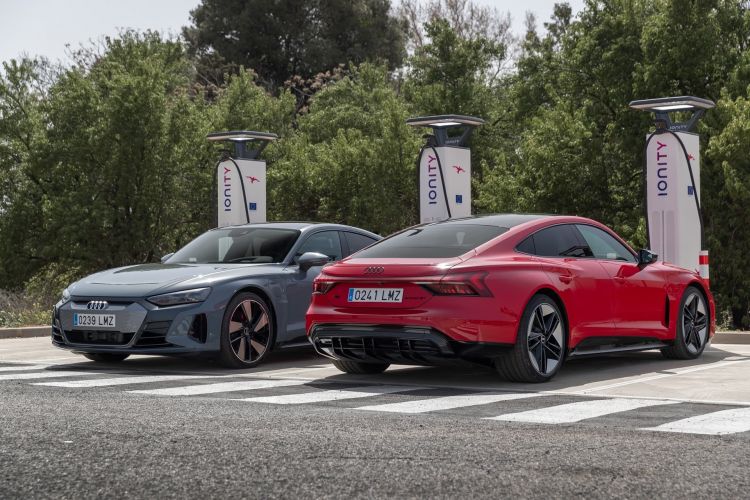 In terms of recharging, we may well use alternating current at powers up to 11/22 kW depending on the internal charger installed, or direct current with up to 270 kW with which we will need just 22.5 min to recharge from 0 to 80%. The regeneration for its part reaches 265 kW, being able to modulate the level of retention through the cams that we have behind the wheel. If we take into account the figures for autonomy and recharging powers, it is clear that the Audi e-tron GT is a very suitable car for travel, but before doing so we recommend you take a look at this special on how to travel by electric using points of public recharge. 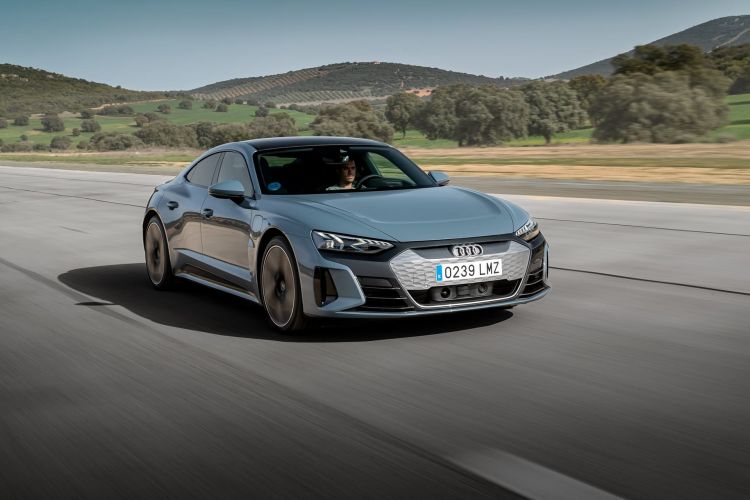 At the wheel of the Audi e-tron GT it is impossible not to find certain similarities with the Porsche TaycanHowever, this is far from being a negative thing. I consider it something positive. And even so, after accumulating a few kilometers at its controls, we discovered that the Audi electric car offers a clearly more GT vision, both in the behavior of its chassis, and in what it transmits when we drive through different scenarios. While Porsche offers a more sporty driving feel, Audi gives more priority to comfort, even in its RS version, where obviously we notice the performance gain with a 0-100 km / h of 3.3 seconds (4.1 seconds in the e -tron GT), but where everything reaches the driver in a smoother and more pleasant way in order to maintain a very high feeling of comfort.

There are clear similarities to the Taycan, but the e-tron GT is perceived as a more comfortable and better-made car.

The most positive aspects of the e-tron GT are the agility with which it operates, thanks in large part to the directional rear axle, the thrust it provides in either of its two versions, the excellent compromise between stability and comfort offered on any surface and the braking feel which allows a very high level of confidence despite the 2.4 tons it declares. In fact it is important to note that on the e-tron GT we can find up to 3 different brake disc compounds: steel, steel with tungsten carbide and carboceramics coating. 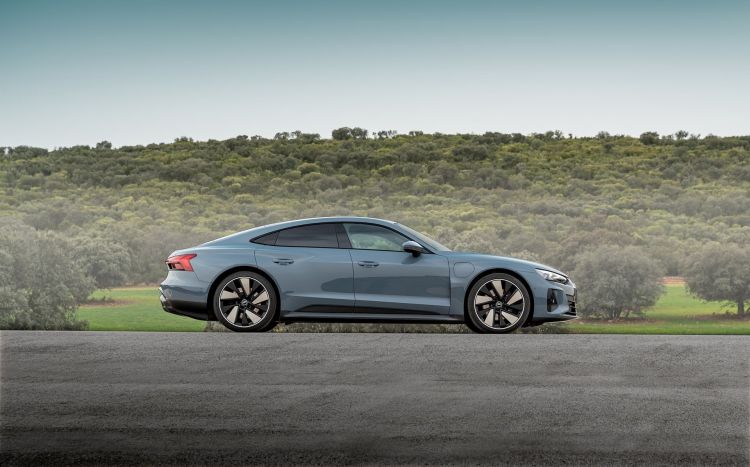 On the negative side, for those who value driving where the driver feels more involved, they will discover a set-up where the filtering is very high, affecting the steering, sound, suspensions, etc. Audi has wanted to provide, logically, a more GT vision than the Taycan at this point, still offering a ride quality and comfort superior to that found in a Model S equivalent. Perhaps the only truly negative point I find in an RS version whose differentiation seems scarce to me, both in design and behavior. 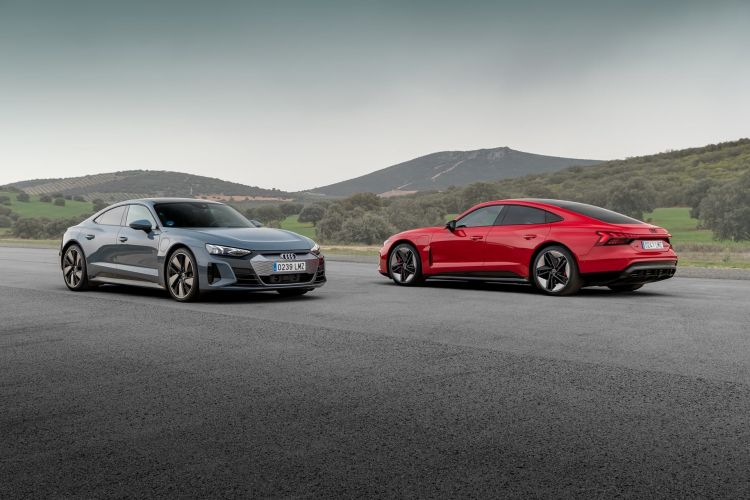 In light of these data, and if we look only at the performance and price figures, it is clear that the Tesla Model S continues to play in another league. None of these three saloons is cheap, like no vata or short of power, torque or autonomy, however the table that we leave you here above clearly reflects that the price / performance ratio that Tesla offers, is still much higher to which Audi or Porsche offer today.