At a recently excavated site in Israel, dated to around 140,000 to 120,000 years ago, fossils have been extracted from a previously unknown population of archaic hominids. They have called her ‘Homo type Nesher Ramla‘, by the site where it was found. Archaeologists excavated about eight meters from the surface and also found large quantities of animal bones, such as horses, fallow deer and aurochs, as well as stone tools.

The study, published in the journal Science, is led by Israel Heshkovitz from the University of Tel Aviv (Israel) and has Spanish participation.

“The main author of the article has not seen fit to propose a new species, but to explain that Nesher Ramla is part of a paleopopulation (paleodeme) closely related to other paleodemes of the Levantine Corridor. The decision is correct, because this zone of continental passage was highly populated in relative terms throughout the Pleistocene. Distinguishing between species in these circumstances is risky “, he tells SINC José María Bermúdez de Castro, coordinator of the Paleobiology Program of the National Center for Research on Human Evolution (CENIEH) and co-author of the study.

The main author of the article has not considered proposing a new species, but rather explaining that it is part of a paleopopulation closely related to others in the Levantine Corridor.

Nesher Ramla has a mixture of archaic traits of the genus Homo and Neanderthals, and can personify the mother population from which the latter and some Asian populations of the Neanderthals originated. Middle Pleistocene. “This combination of traits may be the product of the hybridization of different paleodems living together in a restricted area,” continues Bermúdez de Castro.

Therefore, as these remains have not been attributed to a new species, they have been grouped with others from various sites in the Middle East, which are difficult to classify. The authors of the work consider that all of them composed a local human population that occupied the region between 420,000 and 120,000 years ago.

Describing the significance of the find, Hershkovitz says: “It allows us to give new meaning to previously found human fossils, add another piece to the puzzle of human evolution and understand migrations in the ancient world. Nesher Ramla can tell us a fascinating story, which reveals a lot about the evolution and way of life of her descendants. “ 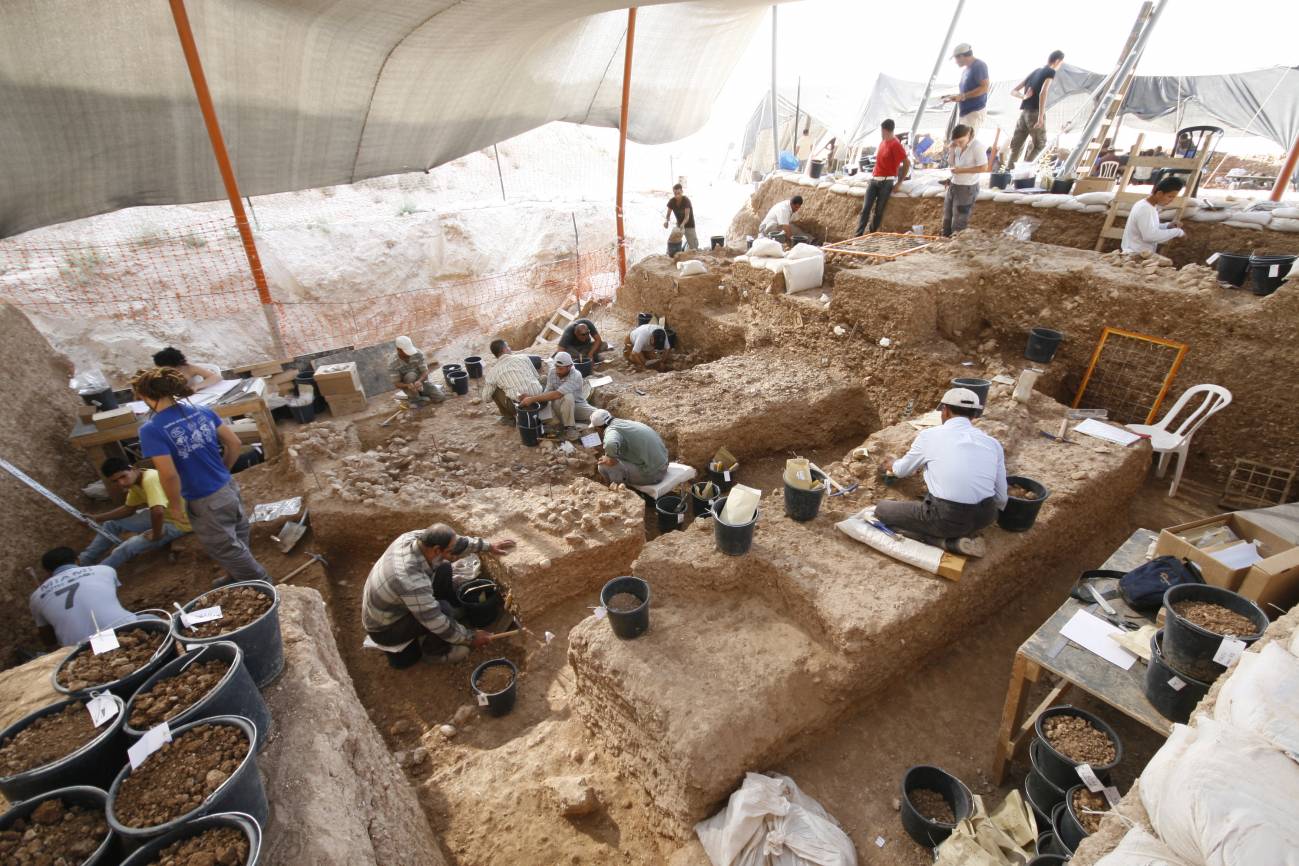 View of the deep section during excavation. / Yossi Zaidner

The researchers made virtual reconstructions of the fossils to analyze them using sophisticated computer programs and compare them with other remains from Europe, Africa and Asia.

The remains, a parietal fragment and an almost complete jaw with part of the dentition, are about 130,000 years. The skull shows more typical characteristics of the species Homo erectus, while in the dentition and jaw there are already traits commonly present in Neanderthal populations.

Nesher Ramla can tell us a fascinating story, which reveals a lot about the evolution and way of life of her descendants

For this reason Nesher Ramla would be a late survivor of a population that inhabited the Near East 400,000 years ago, potentially represented in the fossils of the Israeli deposits of Qesem and Zuttiyeh, and from which the Neanderthals of Europe would have originated.

“The population of Nesher Ramla may be related to the origin of any of the migratory waves that arrived in Europe during the Middle Pleistocene, already with notable Neanderthal influences in their morphology. The most important conclusion is that the origin of neanderthals It is not in Europe but in this region of Southwest Asia ”, assures the CENIEH scientist.

Maria Martinón-Torres, director of CENIEH and co-author of the study, stresses to SINC: “Thanks to the fact that we now know that during the same period they inhabited the Levantine Corridor Homo sapiens – at least 200,000 years ago, as documented by the Misliya deposits in Israel – Neanderthals and populations that precede Neanderthals (such as Nesher Ramla), we already have the place and time when the genetic crossing that has been proposed in other studies ”, he says.

In order to Rolf Quam, professor of anthropology at the University of Binghamton (USA): “It is a complicated story, but what we are learning is that the interactions between different human species in the past were much more convoluted than we have appreciated until now.” 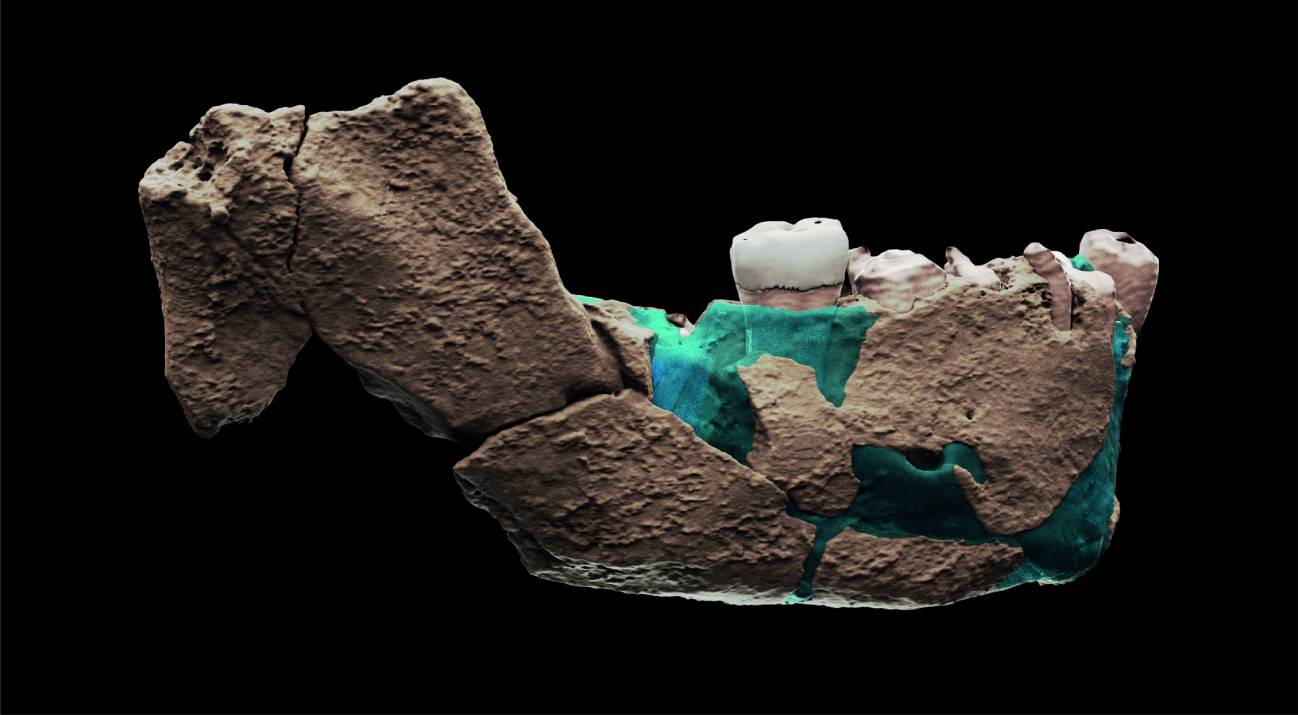 Virtual reconstruction of the jaw of Nesher Ramla. / Ariel Pokhojaev

The finding opens the doors to a new way of understanding the population of Europe. “The origin of all the Pleiestocene populations that came to our continent could have originated in Southwest Asia. This argument is the one that the team of paleoanthropologists investigating at CENIEH has been proposing for a decade and who are co-authors of the article ”, Bermúdez de Castro emphasizes.

It would be a representative of that mother population that gave rise to Neanderthals in Europe and in Asia to other populations whose taxonomic assignment is still not clear.

Martinón-Torres reaffirms this, since the study supports the proposal of his Dental Anthropology Group which defends that it has not been a linear process, but an intermittent trickle of hominins originating elsewhere, probably the Middle East. In this scenario, Nesher Ramla would be a representative of that mother population which gave rise to Neanderthals in Europe and in Asia to other populations whose taxonomic assignment is still not clear (Xujiayao, Maba, Tongzi) ”, he argues.

All Pleistocene humans disappeared, leaving only their genetic trace in modern populations. “The Neanderthal extinction in Europe it can be explained by the devastating effect of the last ice age, the consequent drastic decline of the Neanderthals in northern Eurasia, the search for refuge by the surviving Neanderthals, which led to a pernicious inbreeding ”, says the scientist.

However, the people of Southwest Asia were protected from this process in a privileged area. “That is why it is not easy to explain their disappearance, unless our species completely displaced them from their places of obtaining resources during the last great expansion of Homo sapiens out of Africa ”, he emphasizes. 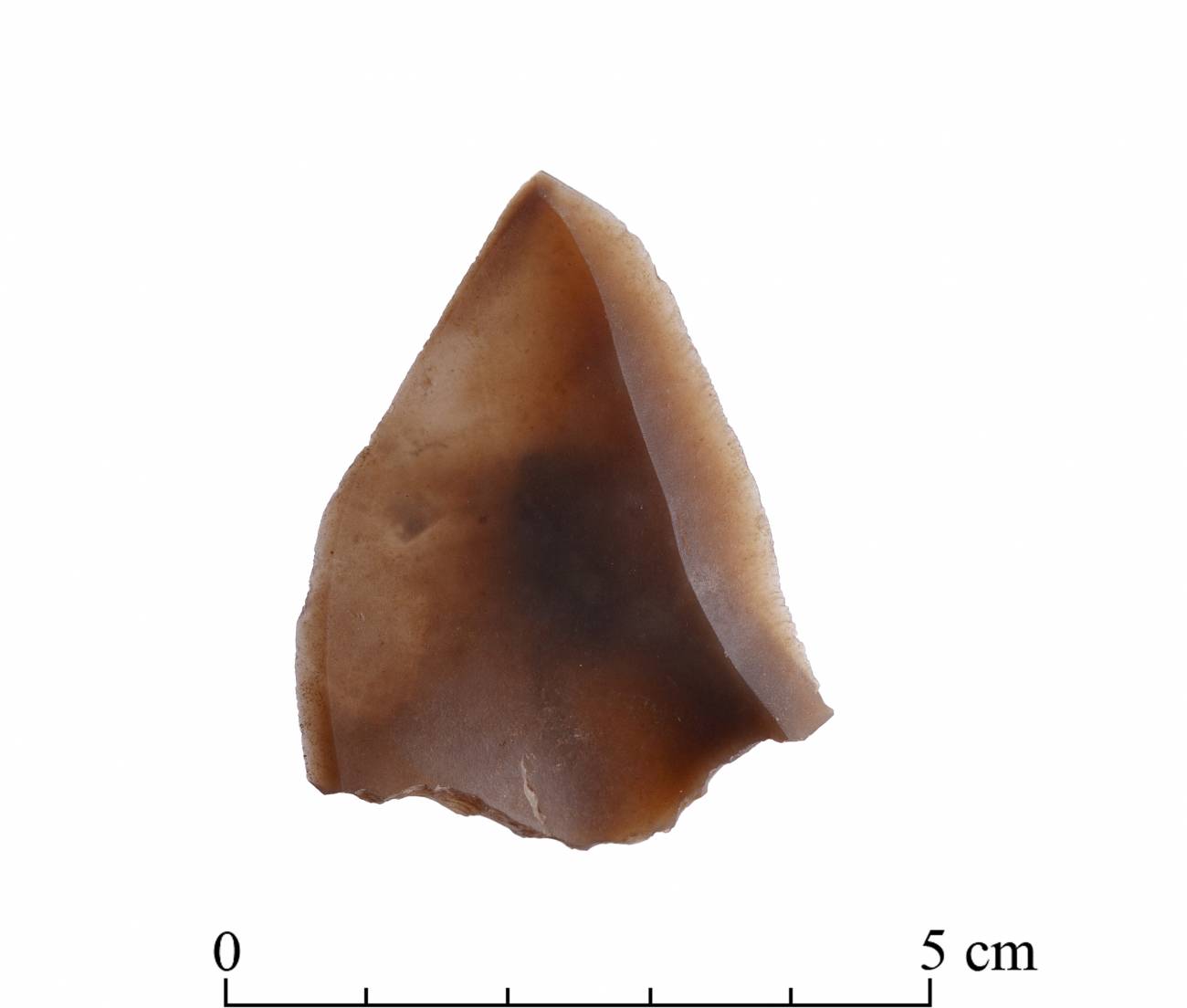 Use of advanced techniques for the time

Homo type Nesher Ramla was found alongside instruments whose technology was until recently associated with more modern lineages. In a companion study, also published in Science, Yossi zaidner from the Hebrew University of Jerusalem, provides the archaeological context of the remains, by providing the radiometric ages, as well as knowledge about the behavior and environment of the artifacts. Together, they test for close cultural interactions and genetic mixing between different human lineages prior to 120,000 years ago.

The mismatched archaeological and morphological affinities and the site’s location at the crossroads of Africa and Eurasia make this an important discovery.

“Interpretation of the Nesher Ramla fossils and stone tools will find different reactions among paleoanthropologists. However, the age of the Nesher Ramla material, the mismatched archaeological and morphological affinities, and the location of the site at the crossroads of Africa and Eurasia make this an important discovery, “he writes Marta Lahr, in a perspective text referring to this research.

For Bermúdez de Castro, “technology, like anatomy, seems to have an influence from all those paleodems. The information is transmitted from one to another and the result is the stone technology most advanced possible known in that area and at that time. It’s about the Levallois technique [procedimiento complejo de lascado], used by both Homo sapiens and Homo sapiens populations Homo neanderthalensis of the region ”, he explains.

Martinón-Torres, adds: “This type of technology, sophisticated, and with a very specific production and size sequence, it is difficult for it to be developed without someone teaching it to you. The fact that H. sapiens, H. neanderthalensis and Middle Pleistocene populations in the Levant have developed it, can be interpreted as evidence of cultural exchange between different species ”.

In this form, the Levantine Corridor appears as a diversity hotspot biological and cultural where there was probably a close interaction between different human species.

This work has not carried out, for the moment, studies of Ancient DNA in Nesher Ramla, however, they refer to an earlier study that suggested that Neanderthals had hybridized with H. sapiens between the late Middle Pleistocene and early Upper Pleistocene.

“The study highlights the weight that the Eurasian continent has had in human evolution and, in particular, in the settlement of Europe. Shifts the epicenter of attention from Africa to Eurasia, particularly to Middle east, a true crossroads between continents and, therefore, between species ”, concludes Martinón-Torres. 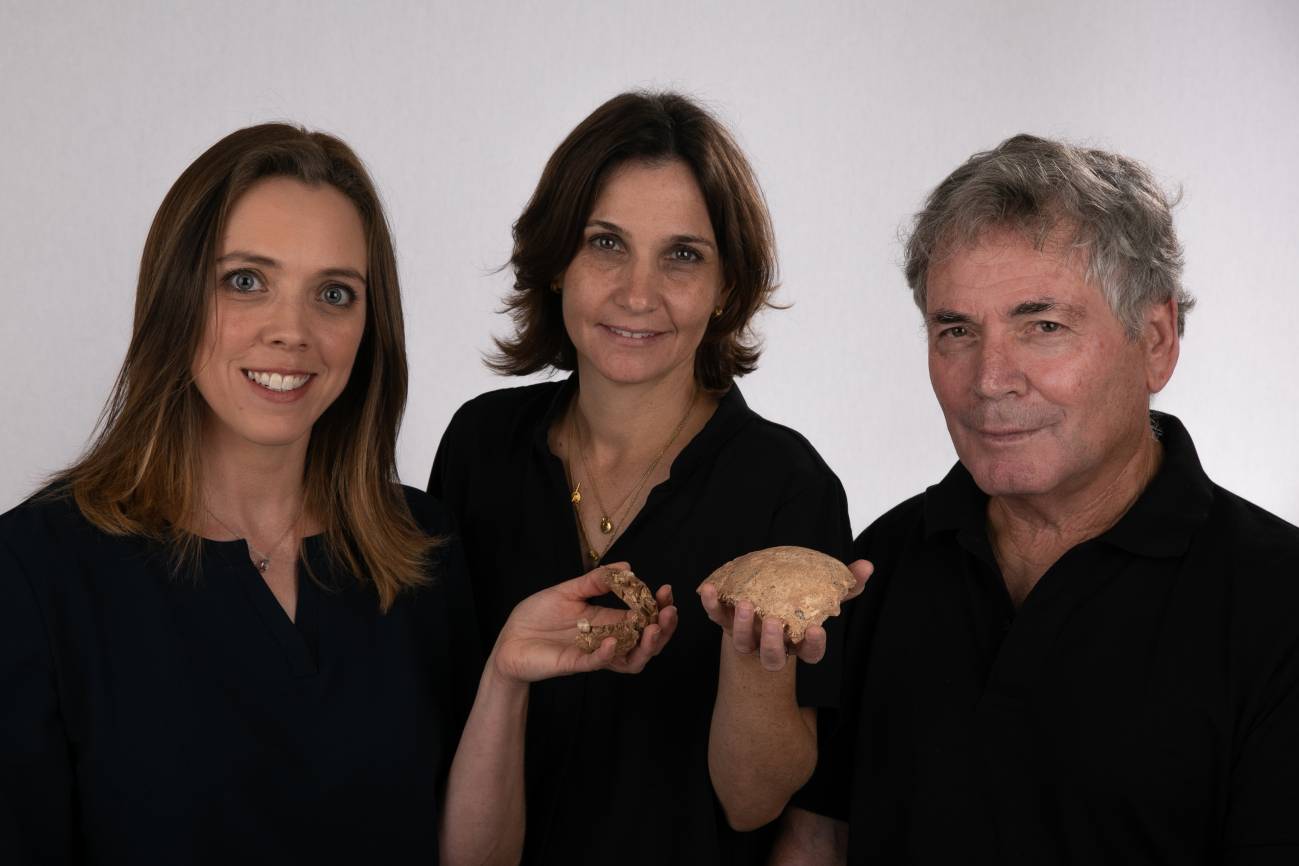 Yossi Zaidner et al. “Middle Pleistocene Homo behavior and culture at 140,000 to 120,000 years ago and interactions with Homo sapiens.” Science