The internal documents of the brands that contain the fiscal results and the strategic plans for the coming years are usually broths with a lot of substance, discovering intentions and future models. This is the case of Volkswagen’s planning document for the next five years, which has confirmed the production of the Audi Q5 e-tron for 2022.

These documents are not a full-blown leak, but are in the public domain, a means of information for shareholders and interested parties in the accounts of a manufacturer, also finding information about all projects and technology development in which they have been immersed.

Although some brands are more discreet than others, they all usually include some outstanding novelties, in the case of new engines or future models. And in the case of the Volkswagen group it is usually common to find some interesting news, such as the confirmation of the production of the Audi Q5 e-tron for 2022, an electricity company that is among the investment program for the next 5 years, with no less than 73,000 million Euros. 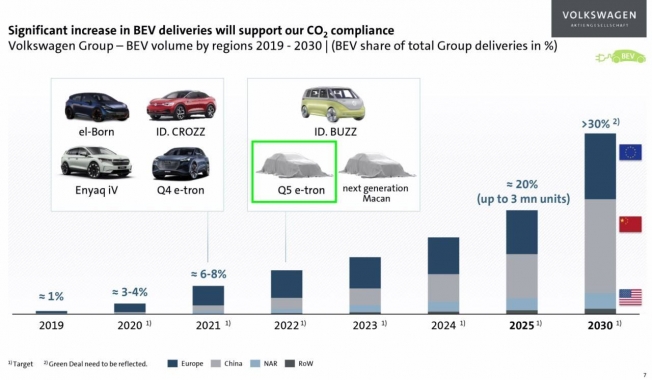 The future Audi Q5 e-tron will arrive in 2022, the German SUV will go electric

The electric SUV with the four rings is next to the new generation of the Porsche Macan, confirming that one of the most important sales pillars of the Ingolstadt brand will be transformed into an electric model, the first for the hoops on the PPE platform. A twin of the Porsche that will be sold in China, as well as in Europe. The Q5 e-tron will hit the market in the second half of 2022, a few months after the equivalent in the German sports brand.

A confirmation that now opens a series of questions that are in the air, such as whether Audi will follow the same strategy as its partner or not. That is to say, if the transformation into an electric model is radical and the commercial life of this generation will be lengthened of the combustion Q5 for a while longer. Or, on the contrary, in 2024 the third generation of the German model with combustion versions will be released.

A question that arises with the Macan strategy, which will extend the commercial life until 2024, despite the fact that Audi advanced its intention to offer a range of electric parallel to the more traditional. Tighter emission limits, country restrictions on combustion, and the significant outlays involved in developing two models with different propulsion technologies can take their toll and change strategy.