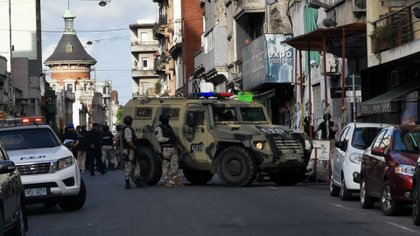 A man entered a jewelry store near the center of Montevideo on Wednesday afternoon, and found himself entrenched there, while holding the owner of the place hostage.

According to the local daily El Observador newspaper, there is a negotiator from the Gurdia Republicana trying to start a negotiation.

The woman, who is allegedly being pointed a gun at her head, is 74 years old.

Local media reported that, so far, the only request that the offender had made had been the removal of the police.

The 911 call that alerted the authorities was made at 4:45 p.m., local time, apparently by a neighbor of the place. Witnesses told the newspaper El País that they saw the hostage being pointed a gun at her head.

The Montevideo Police Chief is on site, Mario D’Elia, and the National Director of Police, Diego Fernández.

According to the same source, around 7:00 p.m. Two members of the Fire Department medical corps – wearing bulletproof vests – entered the store. Minutes later a Republican officer brought a wheelchair to the store.

The local channel 12 news reported that, in negotiations with the police, the man would have said that the robbery was due to a family problem, precisely an illness of his children.