These fossils would be the largest bird in prehistory 0:59

(CNN) – In the 1980s paleontologists from the University of California Riverside visited Seymour Island, part of a chain of islands on the Antarctic Peninsula. They brought home several fossils, including a leg bone and a partial jaw bone from two prehistoric birds.

For decades, the fossils remained in a museum at the University of California at Berkeley, until a graduate student named Peter Kloess began poking around in 2015.

In a study published Monday in the journal Scientific Reports, Kloess identified the birds as pelagornithids, a group of predators that roamed the southern oceans of Earth for at least 60 million years. They are known as “bony-toothed” birds because of their sharp teeth and long beaks, which helped them catch fish and squid from the ocean.

The birds were huge, with a wingspan of up to 6.4 meters. And the specific individuals the fossils belong to may have been the largest of all, the study suggests. 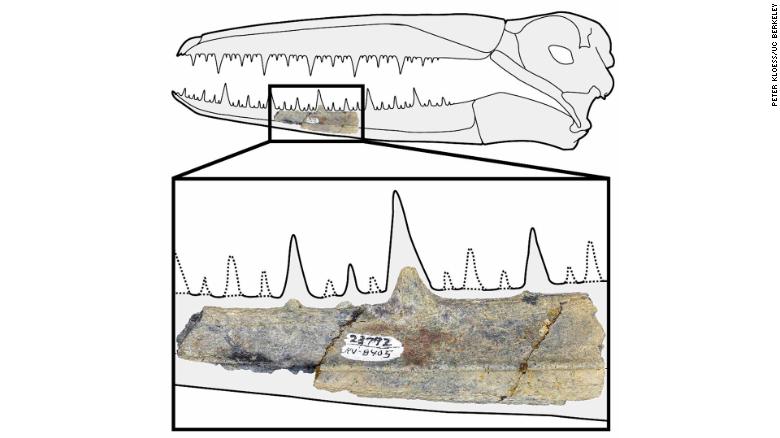 The 13-centimeter segment of the fossilized jaw, which was discovered in Antarctica in the 1980s, dates back 40 million years.

Using the size and measurements of the fossils, the researchers were able to estimate the size of the rest of the individuals. The bird with the leg bone is’ the largest known specimen of the entire extinct group of pellagornithids’, while the bird with the jaw bone was probably ‘as large, if not larger, than the largest known skeletons from the group of bony-toothed birds. ‘

Kloess and other researchers determined that the paw bone dates back 50 million years, and the jaw bone is around 40 million years old, evidence that birds emerged in the Cenozoic Era, after an asteroid struck. Earth and wiped out almost all dinosaurs.

“Our fossil discovery, with its estimate of a wingspan of 5 to 6 meters, shows that birds evolved to a truly gigantic size relatively quickly after the extinction of the dinosaurs and ruled the oceans for millions of years,” Kloess said in a university press release.

“The extreme and gigantic size of these extinct birds is unsurpassed in ocean habitats,” added study co-author Ashley Poust of the San Diego Museum of Natural History.

A bird from Antarctica

Like albatrosses, pellagornithids traveled the world and could have flown for weeks over the sea. At that time, the oceans were not yet dominated by whales and seals, which made for easy prey for giant birds.

“The great ones (pelagornithids) are almost twice the size of albatrosses, and these bony-toothed birds would have been formidable predators that evolved to be at the top of their ecosystem,” said study co-author Thomas Stidham of the Academy. Beijing Science China.

The studio also painted a portrait of what Antarctica might have looked like 50 million years ago. It would have been much warmer back then, home to land mammals like the distant relatives of sloths and anteaters. Antarctic birds flourished there too, including the earliest species of penguins and the extinct relatives of ducks and ostriches. Pelagornithids would have existed in this ecosystem along with the others, potentially competing for foraging and nesting spaces.

Seymour Island, part of Antarctica closest to the tip of South America, has been the site of many other discoveries. A study of fossils discovered there found, in April, that a small species of frog once lived in the region, the first modern amphibian discovered in Antarctica. Fossilized cocoons of leeches have also been found on Seymour Island, as well as a handful of mammals.

“My guess is that (Antarctica) was a rich and diverse place,” said Thomas Mörs, senior curator at the Swedish Museum of Natural History, in April. “We have only found a percentage of what lived there.”