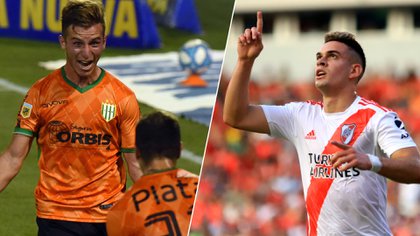 The surprising Banfield receives River, with the top of Zone 3 at stake (Fotobaires-na)

After Atlético Tucumán’s victory over Racing, which positioned it within the Championship Phase, Date 4 of the Professional League Cup will continue its course with three commitments. One of the most interesting of the day will take place at Florencio Sola, a scenario that will face Zone 3 ideal scoring leader Banfield with his guard, River. From 9:30 pm on Fox Sports Premium. The referee will be Fernando Rapallini.

The renewed Drill by Javier Sanguinetti is one of the great surprises of the competition, after triumphing in his three games and looking at everyone from above with an ideal score. Those from the South will now defend the point against the Millionaire, a rival who already won three weeks ago by 3 to 1 in the Libertadores de América.

Despite the highs of Jesús Dátolo and Luciano Pons, the coach from Verdiblanco has in mind to support the same eleven who have won 4-2 against Rosario Central at the Gigante de Arroyito. The great figures of the local team are being the Colombian Luciano Cuero and the youth Giuliano Galoppo and Martín Payero. In case of reaping a new joy, Banfield will be one step away from the Championship Phase, a competition that grants a ticket to the 2021 Copa Libertadores.

Those of Núñez, meanwhile, have 6 units and have a great opportunity to catch up with their opponent at the top of the group. Given the proximity of the first leg for the last 16 of the Copa Libertadores against Athletico Paranaense, Marcelo Gallardo has in mind to put a mix between starters and substitutes.

The coach will give rest to most of the players who had action during the FIFA date: Franco Armani, Gonzalo Montiel, Paulo Díaz and Nicolás De La Cruz. The only one who would be in the game is the Paraguayan Roberto Rojas.

Among the good news, the laps of Ignacio Fernández and Rafael Santos Borré stand out. The midfielder left behind a tear in the left anterior rectum, while the Colombian forward was discharged after contracting coronavirus. Also outstanding is the first call for 18-year-old Santiago Simón, one of the jewels of the quarry.

If the 11 that comes from beating Godoy Cruz in Mendoza is taken into account, the technical director would choose to place Bruno Zuculini in the background (he would give Javier Pinola rest), which would make Santiago Sosa go a few meters ahead to play with Leonardo Ponzio in the middle zone instead of Enzo Pérez. At his sides will be Jorge Carrascal and Cristian Ferreira. Up? Lucas Pratto and Borré.

Although the history puts River as a wide favorite (64 wins and only 18 defeats in 107 games), Núñez’s men cannot beat Banfield at Florencio Sola since the Clausura 2008.