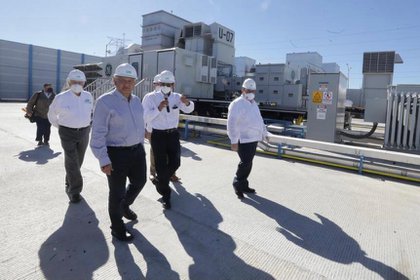 (Photo: Courtesy of the Presidency)

The president of Mexico, Andrés Manuel López Obrador, said this Sunday during the inauguration of aero-derived turbogas units, in the state of Baja California Sur, that he hopes that legislators “act consistently and thinking of the people”, and approve the reform to strengthen the Federal Electricity Commission (CFE) that the president sent to Congress.

“I hope that next week the reform that we presented to Congress to strengthen the Federal Electricity Commission will be approved, because that means security for all Mexicans, it means that there will not be an electric power crisis, that there will be no blackouts , And it also means something very important, which should not be forgotten, during the neoliberal period every year the price of electricity increased, year after year, since we are in government the price has not increased, because we are complying with the commitment.

So that’s why we need legislators to act consistently thinking of the people, not of the companies that have dedicated themselves to looting Mexico, that they think of the consumer, and not only of the domestic consumer, but also of the companies ” , indicated the Mexican president.