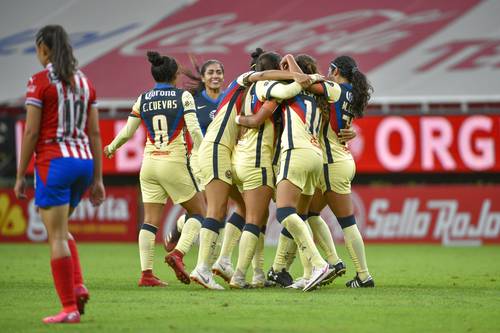 ▲ With the 2-2 achieved yesterday in their visit to the empty Akron stadium and the 1-0 in the first leg, the Eagles qualified 3-2 on aggregate. Photo Liga Mx Femenil / Imago7

In a match with a cardiac outcome, América won their ticket to the semifinals of the 2020 Guardians Tournament of the Mx Women’s League after defeating Chivas with an aggregate score of 3-2, which was useless having rescued the 2-2 tie yesterday in the duel back in the quarterfinal stage. The Eagles had obtained a 1-0 victory in the first leg played last Friday at the Coapa facilities.

Those led by Leonardo Cuéllar suffered more in the clash at the Akron stadium, because despite going on the attack from the start, they were not able to open the scoring before going to rest.

It was until the 60th minute that the azulcremas were rewarded for their effort, after Marlyn Campa got 1-0 after finishing off in the area a ball yielded by Jana Gutiérrez, who in turn had received it from the bottom line by the scorer Daniela Espinosa.

Just six minutes later, at 66, the Americanist Eva González scored 2-0, when she was encouraged to shoot from the crescent to beat Chivas goalkeeper Blanca Félix.

America’s second score was lethal for the rojiblancas, as they were unable to generate dangerous arrivals and soon began to despair, which made them make mistakes on defense that could cost them more.

Despite the dominance of the azulcremas, the goalscorer of Guadalajara, Alicia Cervantes, found a space and shot from outside the area to score 2-1, at minute 74.

The goal boosted the spirits of the locals, who managed to close the gap on the scoreboard in the 85th minute, after Isabella Gutiérrez shot from afar to leave the American goalkeeper Renata Masciarelli without a chance and sign the tie 2-2.

In the final minutes, Chivas went all out on the attack in search of equalizing the global score as well; however, America tightened the mark and prevented her rival from doing her further damage, thereby making her move to the semifinals of the women’s tournament.

They surprise the red and black

At the same time, the sub-leader Atlas was eliminated from the tournament after a surprise 3-2 loss to Querétaro, in the second leg of their respective quarter-final series played yesterday at the Colomos facilities.

The rojinegras arrived at the match with a 2-1 advantage obtained in the first leg, and although the overall score was tied 4-4, the Queretanas got the pass for their three goals as a visitor.

Atlas opened the scoring to 21 through Joana Robles, but only four minutes later (25), Lizette Rodríguez got a 1-1 level for Querétaro.

Forward Adriana Iturbide put the locals ahead again in the 34th minute, leading them to the dressing room with a 2-1 lead (4-2 on aggregate).

In the complement, Carla Rossi’s pupils tied again (2-2) thanks to a maximum penalty in his favor, which was executed correctly by Rodríguez at minute 77, with which he achieved a double and 4-3 on aggregate for his team.

Six minutes from the end, at 84, Adriana Orozco did the feat and gave Querétaro the 3-2 victory, thus sealing her pass to the next round.

Winning of the felines

Superleader Tigres also obtained his ticket to the semifinals after beating Pachuca 4-1 yesterday in the second leg of their respective quarter-final series, played at the University Stadium, with which he achieved an aggregate score of 6-2. In the first leg, the felines had won 2-1.

The Monterrey team made use of their local status, as well as their extensive experience in the league, to completely annul the Tuzas, whose defense looked vulnerable to the offensive power of the rival.

Just at minute 2, Stephany Mayor finished inside the area to open the scoring and get 1-0 in favor of the locals.

Katty Martínez contributed with a double, at minutes 12 and 19, to increase the advantage of Tigres (3-0), and Belén Cruz scored the fourth to seal the win, at 67. Andrea Balcázar scored the honor for Pachuca , at 50.

In this way, Tigres will face Querétaro and América will face the winner of the series between Monterrey and Pumas.