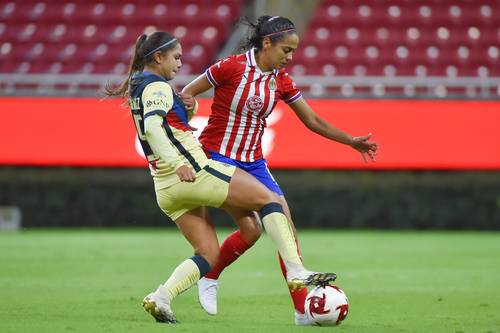 ▲ The game held at Akron Stadium was part of the penultimate day of the tournament.Photo Imago7

In a lackluster game and with a brace by Daniela Espinosa, América beat Guadalajara 2-1 in the national classic of the Mx Femenil League, yesterday in a duel played at the Akron stadium, corresponding to matchday 16 of the 2020 Guardianes tournament.

Despite the victory, the Eagles remained in fifth place in the general table, with 34 points, while Chivas, who did not have their scorer Alicia Cervantes – who suffered a sprain on Sunday -, remained in third place, with 38 units.

The Guadalajara team asserted its local status in the first minutes of the match, as it managed to have greater control of the ball and generate more arrivals from danger; however, it lacked forcefulness to invade the creamy blue bow.

Carolina Jaramillo and Joseline Montoya had the clearest opportunities to overtake Chivas at the beginning of the match, but they failed in their shots, as the former sent the ball straight into the hands of American goalkeeper Renata Masciarelli, and the latter, after a series of rebounds in the area, could not settle to finish off being in front of the opposing goal.

Despite showing a lackluster game and with few ideas in the attack, América managed to open the scoring at minute 26, when the referee Karen Hernández signaled a maximum penalty for a foul by rojiblanca Michelle González on Daniela Espinosa.

The azulcrema forward herself was in charge of collecting from the 11 steps and with an excellent execution managed to deceive the Guadalajara goalkeeper, Blanca Félix, to put the 1-0 in favor of the Eagles.

Just two minutes later, at 28, Espinosa capitalized on a blunder by the rojiblanca goalkeeper to increase the advantage of his team, because when trying to clear the ball, Felix left it within reach of the Americanista, who without hesitation, finished off in the area to pierce the net and sign the 2-0 of the azulcremas.

Both annotations caused the impetus of the Guadalajara squad to fade in the final stretch of the first half, as they failed to cut distances before going to the dressing room.

The second half started with fiery spirits, as the players from both squads came out onto the court with a much more fierce character, which caused the match to become harsh and many fouls were committed that were well sanctioned with yellow cards.

This intensity even caused an outbreak of anger, after in a hand-to-hand play the Americanist Selene Valera pushed the red-and-white Joseline Montoya, who was defended by her partner Norma Palafox, which unleashed strong claims on the part of the members of both teams, including Carolina Jaramillo, who was cautioned.

A few moments later, the azulcrema Mónica Rodríguez was also punished with a yellow card after knocking down María Sánchez, from Chivas, after giving her a strong elbow.

However, the efforts of the rojiblancas had its reward at minute 77, when María Sánchez took a spectacular free kick to shoot the American goalkeeper and put the 2-1 on the scoreboard.

The controversial play came in the final stretch of the match, when Betzy Cuevas, from Las Águilas, pushed María Sánchez into the area, causing her to fall to the grass. After the action, the rojiblancas asked the whistler to score a penalty, but she ignored them and in the following minutes they could no longer rescue the tie.

In the first game on Monday, played at the Hidalgo stadium, Atlas beat Pachuca 3-1, thus remaining in fourth place in the general classification, adding 38 units, while the locals stayed in eighth position , with 24 points.

The red and black goals were the work of Adriana Iturbide, at minute 27 and 80, and Janeth Hernández, at 37. Lizbeth Ángeles scored for the Tuzas, at 72.