The Sunnyvale company has to its credit an interesting patent in which they talk about something called Gaming Super Resolution, a technology that could be the central core of what we knew, until now, as FidelityFX Super Resolution. As we told you at the time, we are before the possible rival to NVIDIA’s DLSS 2.0 solution, And yes, its basic concept should be the same: reconstruct the image intelligently, starting from a resolution lower than the native one, to achieve high graphic quality and superior performance.

AMD has openly confirmed that it is working on this technology, and it is totally normal. With its DLSS 2.0 solution, NVIDIA has shown that the potential of AI applied to image reconstruction in games is enormous, so much so that it can triple the yield without producing a notable loss of quality. The difference is so great that, when we compare two graphics cards, such as a RX 6800 XT and an RTX 3080, if we activate the DLSS 2.0 in the second the first one is in a very complicated situation.

With all of the above in mind, it is easy to understand why I have said so many times that AMD needs to respond to NVIDIA’s DLSS 2.0, and why I think you should prioritize this over even a performance improvement under ray tracing. The first will come with this generation, thanks to that Gaming Super Resolution technology, which apparently will be part of FidelityFX Super Resolution, while the second can only be realized with a new graphic architecture, which leads us to the Radeon RX 7000, a generation that, as we saw earlier, could focus almost entirely on improving ray tracing performance. 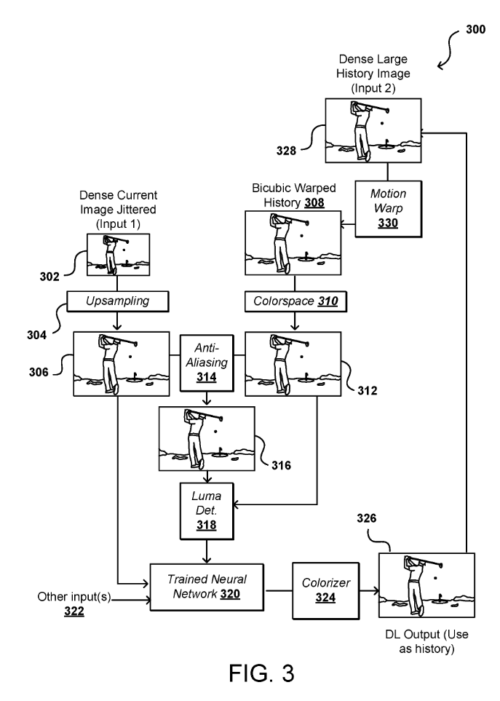 Gaming Super Resolution: This is how this technology works

In the image above we have, on the left, a representation of the patent associated with NVIDIA DLSS, and on the right its equivalent in Gaming Super Resolution technology. Even if we are left alone on the surface, it is obvious that both companiess seem to have adopted a different approach, But how exactly does AMD’s solution work? Let’s see it.

In essence we are facing a rescaling, albeit with a marked smart component and a non-linear bet, as we have seen in the previous paragraph. The patent also says that Gaming Super Resolution could work on a wide variety of devices, including, verbatim, computers, video game consoles, laptops, mobile devices (tablets and smartphones), televisions and “Smart Box” equipment. for televisions.

Interesting, right? This could give a lot of play if AMD decides to take its Radeon GPUs to the mobile sector, but wait, there is still more, and that is that, according to the patent, the Gaming Super Resolution technology could work on different processing units, including from CPUs to GPUs and, of course, also in blocks of both elements. In short, it will be a cross-platform technology, and it will have a very ambitious approach from AMD.