The Xbox Series X are, in essence, PCs with a total orientation to video games. You can’t do anything else with them (although we would like to), and since their launch it was inevitable to wonder how much we would have to spend on a PC with similar power.

It won’t be the same, but AMD just put on sale a “Desktop Kit” with the AMD 4700S processor, which is theoretically the same micro that is part of the Xbox Series X. This product comes without a graphics card – which is the other star component of the console – and in fact only has a PCI slot with certain limitations in terms of support graphics. Conclusion: you will not be able to mount a PC equivalent to the Xbox Series X.

A curious kit, but one that is very far from what the Xbox Series X offers

According to Tom’s Hardware, the processor integrated in this kit is a version that has not ended up on the Xbox Series X due to minor manufacturing defects. AMD reuses those micros that are fully functional but that have not passed those more demanding requirements that are asked for the Microsoft console.

This integrated solution has almost everything you need to get a PC up and running. The board adopts a mini-ITX format and it has the processor, memory and a cooling system.

The AMD 4700S It is an APU with eight Zen 2 cores at 3.6 GHz (4 GHz in Turbo mode), and AMD offers options for 8 or 16 GB of GDDR6 memory. The limitation that it has is that it does not have the integrated GPU (or it is defective, so it is not activated).

If we want to connect an NVIDIA graphics, the supported ones are the GeForce GT 710, 1030, GTX 1050, GTX 1050 Ti and GTX 1060. The graphics power is certainly decent in some of those options, but not even close to the one provided by the graphics used in the Xbox Series X. 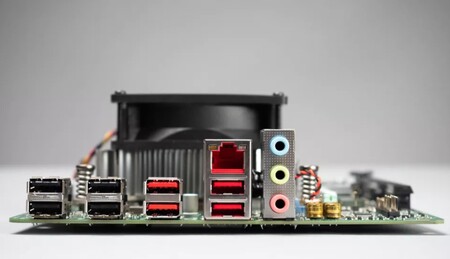 There are also limitations on storage: we have two SATA III ports, but no M.2 slots. Fortunately, we do have a Gigabit Ethernet connector and various USB ports, both USB-C and USB-A. Curiously, there is only support for Windows 10, and it seems that this processor will not make it easy to use it with previous versions of Windows … or with Linux.

Although the kit is announced on its official website, AMD has not revealed the price or availability of the product, although it can be purchased in some Finnish online stores for about 270 euros.