Amazon is still in the fight to conquer the living room. A few weeks ago it renewed its line of Fire TV devices and presented for the first time in Spain its Amazon Fire TV Cube, which in this second generation, comes to our country with interesting news. As in the case of the Fire TV Stick, the Cube has the ability to play videos 4K Ultra HD HDR, but from there, the differences begin.

First of all, let’s talk about storage. Compared to the 8GB offered by the sticks that Amazon has positioned so far, the Cube grows to 16 GB, which ensures that we will not have problems not with the applications, but above all, with the games. Not that 16GB is ideal, but actually, we are hardly going to need more. And if we need it, we can always insert a memory card or a USB drive of up to 128 GB.

In which one of its most interesting features, we find that Alexa is not only integrated in the remote hand but in the “cube” itself. In other words, we can directly talk to our television without having to press any button.

And how does it work? Surprisingly good actually. If we have the appropriate video skills and the applications that interest us, browsing even the DTT channels is faster than a traditional controller could do. Most orders are recognized without any problems and almost always offer an adequate response to the most common commands.

Another thing is to enter the realm of “complex” questions. Because even though he almost always understands what we say to him, the results are sometimes… surprising. For example, if we ask it to show us “Spanish comedies”, it will offer us two or three correct results that it will complement with a selection of random titles (either comedies from other countries, or films that have nothing to do with it).

And in general in any search we do, Alexa will complement the results with those titles that for whatever, Amazon wants to promote. In this sense, voice control works much better for specific commands, such as “I want to see ‘The Office'” than as a recommendation engine.

The most interesting thing, however, is to see how Alexa is also capable of taking control of the television as a whole, being able to turn it off or on with voice commands, change the channel within some applications, increase the volume … etc. Amazon’s AI is integrated into most of the applications we have installed and although it is interesting (if for example we say “Put The Crown”, it will understand that we are referring to the Netflix series), it is also frustrating when it does not finish us understand, so we can not lose sight of command. 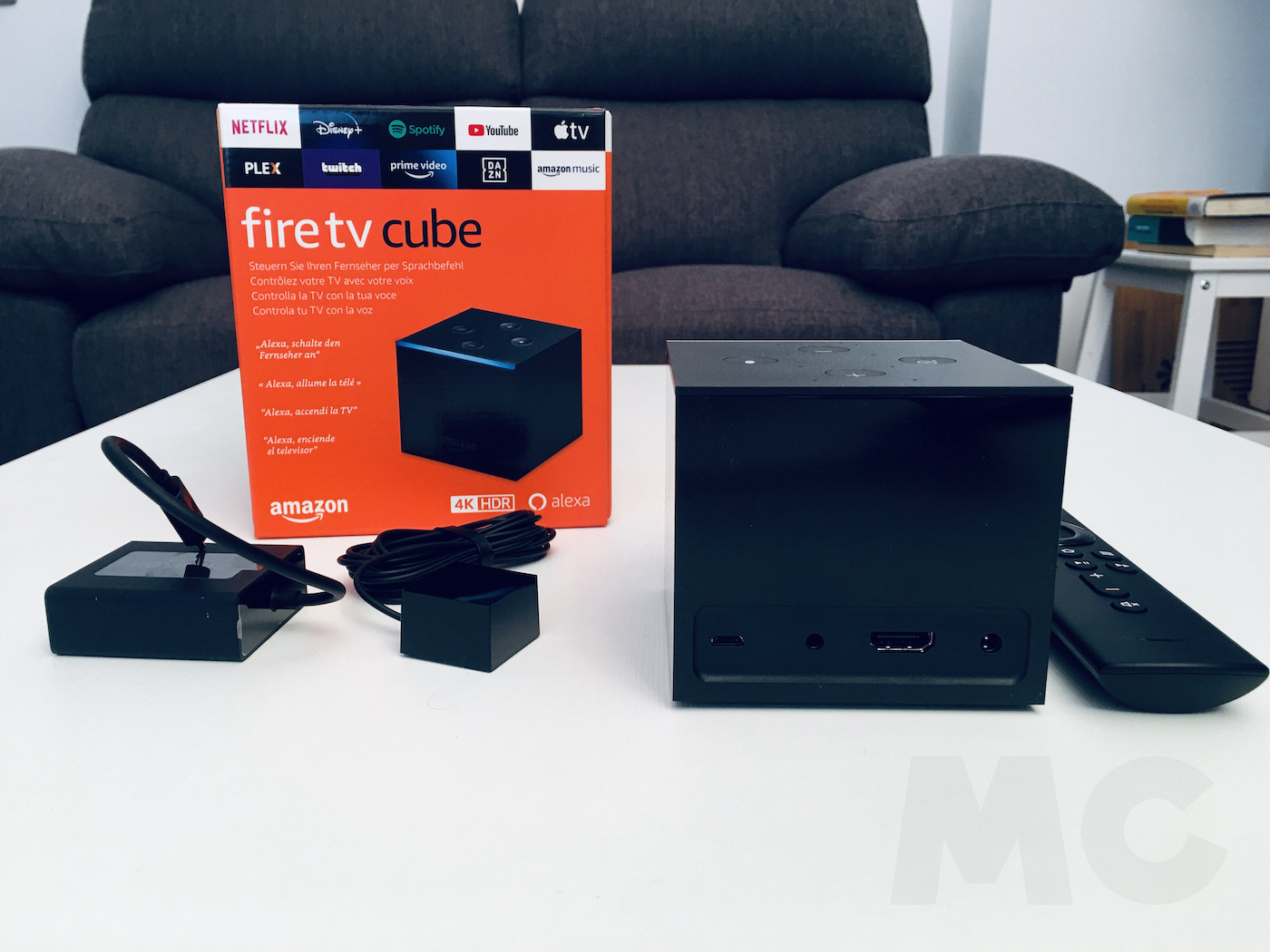 Having a Smart TV at home that I am quite satisfied with, I admit that I did not quite see the usefulness of an additional device like the Amazon Fire TV Cube. However, you soon discover that having a hexacore device (Quad-Core at maximum 2.2 GHz and Dual-Core at 1.9 GHz maximum, with 2 GB of RAM) makes the difference, not only in the browsing experience. in general but at the time of run the applications.

Although Netflix is ​​Netflix and works well on almost anything, applications like Movistar +, Filmin or RTVE on demand, really benefit from that extra power. So much so that I dare say that Movistar works better on this device than on the decoder provided by the company. Applications that only perform correctly on a Smart TV, on the Amazon device «fly».

One of the most interesting elements, the IR receiver, we find, however, outside the cube. Although it is striking that Amazon has not integrated it into the main body (we must connect it to a micro USB port on the cube itself), it has several useful functions, beyond receiving orders from the Fire TV remote.

For example, thanks to this receiver we will not have to use the remote that Amazon provides, since it is compatible with most of those provided in modern televisions … so if we are not going to use the “Alexa” button on the remote , there is no problem to completely forget about it.

Furthermore, thanks to the fact that we have this IR receiver and that the Cube is equipped with HDMI-CEC, we can also use Alexa to control the rest of the devices that are part of our «Home Cinema», such as sound bars, Blue- players. Ray, or even our video game console. Of course, for a device that costs more than 100 euros, the include an HDMI cable in the box it would not have been any inconvenience. 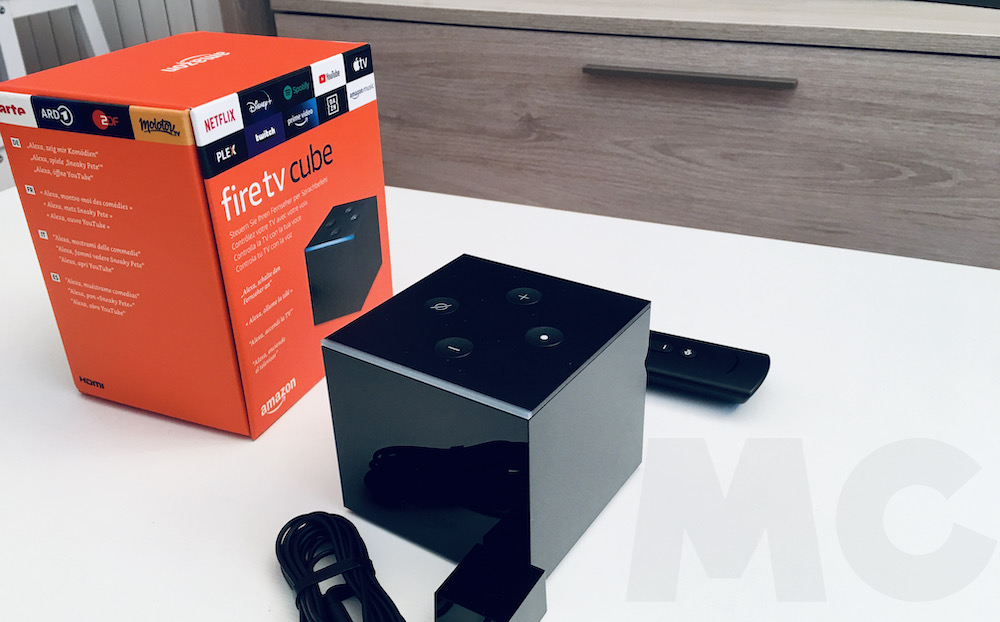 Another feature to highlight is that Fire TV Cube has connectivity Bluetooth 5.0, so if our television does not have it natively, we can take advantage of this functionality to easily connect it with other devices such as speakers or wireless headphones with little effort. If in addition to the Fire TV Cube we have one or two Amazon Echo speakers, we can activate the “Home Cinema” option, so that the sound from our television is projected through the echoes.

Inside the box that accompanies this device, we also have an ethernet adapter, which can be interesting to use if we have the router near the television or the WiFi signal we receive is weak. In our case, we have not had the need to use it and the visiting experience has always remained stable.

Of course, before launching it, we knew that Fire TV was a window for the promotion of content and other Amazon services … but perhaps we did not expect it to be to that point. By being able to install other applications such as Netflix, Movistar, Filmin, etc. We hoped that Fire TV Cube would facilitate the increasingly complicated task of discovering content, so that we did not have to go into each application to search for it.

And this is something that does … in a way very limited. It is true that from time to time, Amazon recommends some content of its competition in the upper banner of the screen and that if we ask you about a specific actor, or a movie, you can search within some of the applications that we have installed (not all of them) but from there … we’d better get used to a constant recommendation of Amazon Prime Video content. Let’s say it now: if it isn’t that intelligent content hub for all platforms, it is perhaps the most frustrating in an overall very good experience. 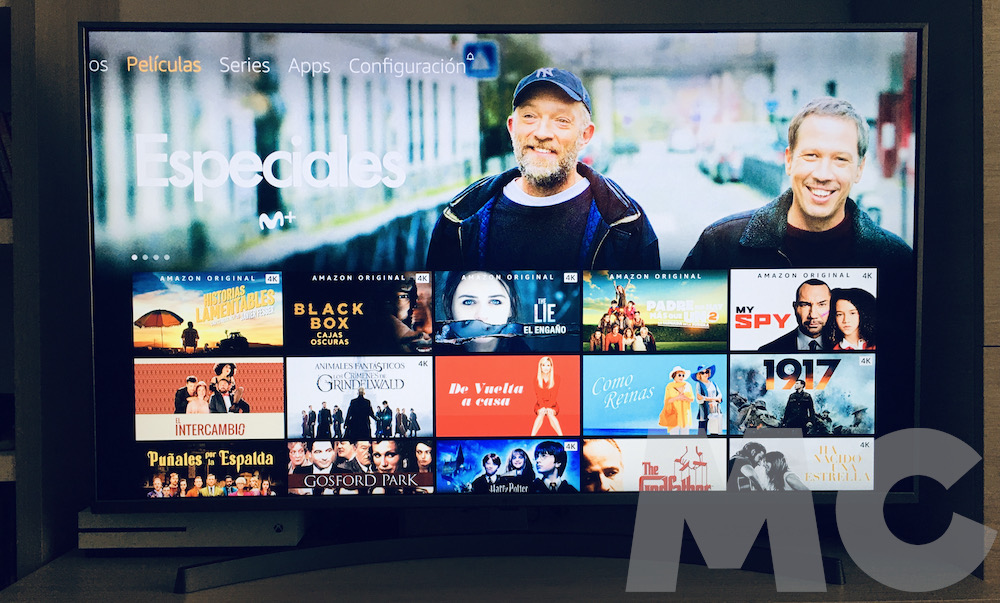 On the other hand, the user interface, although it has improved compared to the first versions, is still somewhat confused. For example “My videos” it is practically indistinguishable from “My movies” unless we have connected a memory card or a USB device in which there is multimedia content. The menu «Apps» shows the applications that we can install, but if we want to access a grid of the applications that we have installed, we can only do it from the section «My apps and games» from the initial menu, showing itself as an “infinite” strip, which as soon as we have installed some applications, the scroll can also be.

From there, the rest of the interface works clearly and unless we would have liked to be able to customize the initial screen, we can’t fault it any more. Navigation, we repeat, is really fluid and once we get used to “where everything is”, it is difficult to return to our “traditional television” no matter how intelligent it may seem.

Can I play with the Fire TV Cube? You can, of course. The experience in this case is similar to that offered by a mid-range smartphone. Most of the titles available are simple but it is true that Amazon does not want, nor at the moment can, rival a console. In the not too distant future, maybe we could see how it integrates with services like «Amazon Moon«, its cloud video game platform … and then we could be talking about something else.

Amazon Fire TV Cube is a good multimedia center with obvious advantages compared to a Smart TV in use: performance, variety and quality of installed applications, polished and well-designed interface … The integration with Alexa, although it is uneven depending on the applications or what we ask, works in general The correct way and experience of controlling television using only your voice has never been closer.

The fact that it integrates so easily with other Amazon devices and that also serves as a hub with which to control other devices (smart or not) in our home, is also another point that favors it.

On the other hand, an excessive dependence on Amazon services plays against them and that there is no greater integration of third-party content to offer a more complete and interesting experience. Without this integration, it is not so easy to justify an investment of more than one hundred euros, but of course if Amazon Prime Video is one of those platforms to which we are “hooked”, it may be an ideal device.