Amanda Knox criticizes Matt Damon’s Stillwater for profiting from his story without his consent. 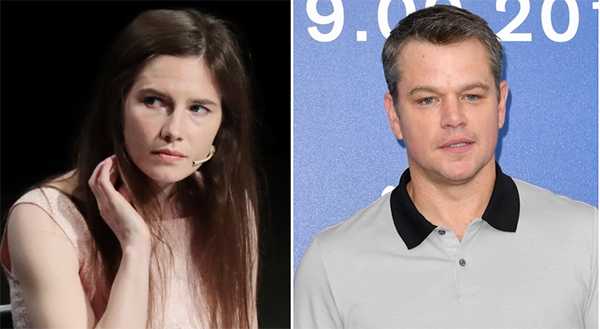 According to InTouch, Amanda Knox accuses Matt Damon’s film Stillwater of taking advantage of her story without her consent.

The report claims that the 34-year-old journalist criticized everyone involved in the movie “Stillwater” who “benefited from my name, my face and my story without my consent” – Knox wrote on Twitter this Thursday, July 29.

“This new film from director Tom McCarthy, starring Matt Damon, is’ loosely based ‘or’ directly inspired by ‘the Amanda Knox saga’, as Vanity Fair puts in their article promoting a movie to make money, neither of the which I am affiliated with ”- she begins her message.

“I want to pause right here in this sentence: ‘the saga of Amanda Knox’. What does that refer to? Are you referring to something that I did? No. It refers to the events that resulted in the murder of Meredith Kercher by a thief named Rudy Guede. It refers to the poor job of the police, the closed vision of the prosecution and the refusal to admit their mistakes that led the Italian authorities to unjustly convict me, twice. “

Amanda Knox made headlines after she was wrongfully convicted of the murder of her fellow exchange student in 2007. She spent the next eight years fighting for her freedom, until she was acquitted in 2015. There are several documentaries about her case. Unusual everything that happened.

Meanwhile, Stillwater, which premiered at the Cannes Film Festival in July, follows Matt Damon as Bill Baker, a construction worker from Stillwater, Oklahoma, who travels to Marseille in France after his daughter (Abigail Breslin) is imprisoned for murdering her lover.

In an interview with The Observer, the film’s director McCarthy defended his inspiration behind the story.

“Many, many years after – 10, 12 years ago – after the Amanda Knox case, I thought it was a fascinatingly tragic case. But what really caught my attention was this idea of ​​a relationship, or the situation of the young woman in prison, and I started to think, Wow! What’s the story around that? “

“There was enough written and said about that story. I didn’t want to address that in a real way, but I really loved the idea, or was just fascinated by the idea, it’s a better way of saying this, of a young American woman who is in prison abroad for a crime that may or may not exist. task. And then I quickly began to focus on the relationship between her and her father, which was fiction, ”she explained.

“This strange relationship between father and daughter in this extraordinary environment. What a great starting point for a story. “

Well, I see Amanda is not criticizing the movie Stillwater, she is criticizing how Vanity Fair presented it in her article, because although the director said it was inspired by her case, what is shown on screen is a different story. But you know, headlines sell like this. In fact, here thinking, capable and it was on purpose for Amanda to react and draw attention to the film. See? Now I want to see it …

So, Amanda Knox criticizes Matt Damon’s Stillwater for profiting from his story without his consent.