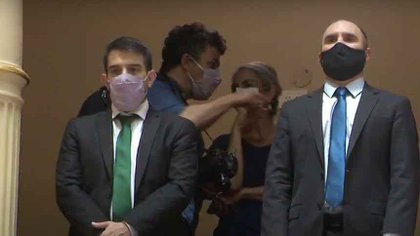 Minister Guzmán, in the Senate, in the session in which the Budget could not finally be approved

Today will be a key day for the Minister of Economy, Martín Guzmán. After the unprecedented and confusing episode last week in the Chamber of Senators, where the 2021 Budget project was not approved due to a lack of forms, the official waits for Deputies to complete the approval process without further complications. The treatment of this law, key for the Economy, even though it is expected that it will undergo substantial modifications such as the level of fiscal imbalance foreseen, will give way – with the quorum achieved to start the session – a discussion that is anticipated hot for the wealth tax project, the extraordinary contribution “for the only time” that will weigh on the great fortunes.

The minister is far from being a promoter of this initiative, whose approval is taken for granted. On the contrary, the Palacio de Hacienda did not hide their disagreement until ten days ago. Those were days in which they also considered that the idea had lost strength and that, due to the exchange rate run and the imperative need to calm down the financial market, the project would not reach the venue. But last week, when Guzmán buried the possibility of awarding a fourth IFE, everything changed. Now the minister changed the line of speech that is repeated in his ministry. Instead of explaining that no initiative is good “that is not sustainable within the design of a global framework, thought”, now in the environment of the official they refer to the head of the International Monetary Fund (IMF), Kristalina Georgieva, to justify the project.

The managing director of the organization published a report in January in which she argued that it is possible to fight inequality by raising taxes “at the top of the income distribution without sacrificing economic growth.” The head of the IMF contextualized these measures within the framework of a tax reform focused on greater progressivity. A fundamental nuance, to which Guzmán adheres, who on more than one occasion promised a tax reform to make the current tax system more progressive. These plans, under the pressure of the urgent, have been delayed.

For now, beyond counteracting efforts to generate signals that contribute to financial stabilization – a term that haunts the minister – and the normalization of the economy, the implementation of the tax on large fortunes will collide with one of the most recent measures announced by the Government. At the beginning of last month, at the peak of tension due to the loss of reserves and the skyrocketing price of the financial and informal dollar, Guzmán announced a lukewarm drop in withholdings with the aim of achieving a greater immediate supply of foreign currency. And it presented, with the same medium-term objective, a money laundering plan aimed at financing private construction. That project was sent to Congress and, Paradoxically, it proposes to exempt from the payment of Personal Assets investments destined to the construction of new buildings for two years and grants a tax credit to compute against this tax equivalent to 1% of the amounts disbursed. The new tax that will surely obtain approval today in the Chamber of Deputies openly conspires against the chances of success of this initiative.

In any case, the project they promote Maximum Kirchner Y Carlos Heller It is not at this time the main obstacle for the economic team to reestablish a minimum environment of trust in the market and among entrepreneurs. Particularly when in full negotiation with the IMF mission, the hard wing of the ruling party sends an incendiary letter to the organization, probably without concrete consequences in the negotiations, but to which the markets follow with attention. It is possible that the ambivalence in the messages and speeches will generate some revenue in the political sphere given the delicate balance of forces that make up the Government. But the truth is that, especially when the course is not clear in the facts either, there is no such thing as the economic benefit of that ambiguity.