The second presentation of the season showed us the new Honda-powered AlphaTauri AT02, which features subtle changes in most areas, but also profound modifications brought about by the engine.

As expected, the AlphaTauri AT02 of the 2021 season does not present major changes compared to last season’s car, but some aspects that we will analyze below do draw attention.

But before going into depth in the modifications, it is worth highlighting the change of decoration, which this year loses white and gives more prominence to blue. 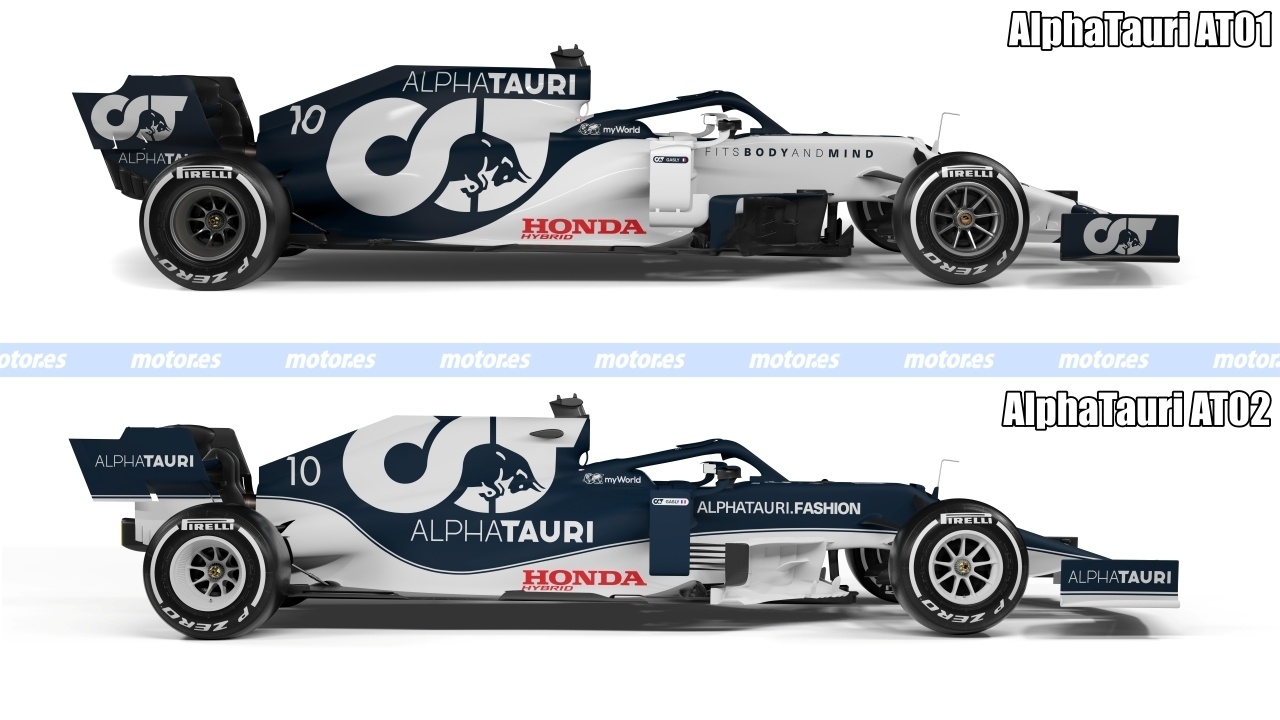 Blue gains weight on the AlphaTauri, especially at the front.

Technically, it should also be noted that the team itself had already confirmed that it ruled out using the rear of the 2020 Red Bull RB16 as a result of the good functioning of the one used last year and corresponding to the RB15 of 2019. In this way, AlphaTauri has focused on two main aspects: the front end and the packaging of the new Honda engine.

Tokens on the front

As we know, Formula 1 has imposed this year a token system by which the development of the mechanical elements of the single-seaters is limited. In practice, each team has the option of using two tokens to develop last year’s car (while the aerodynamics are practically free). 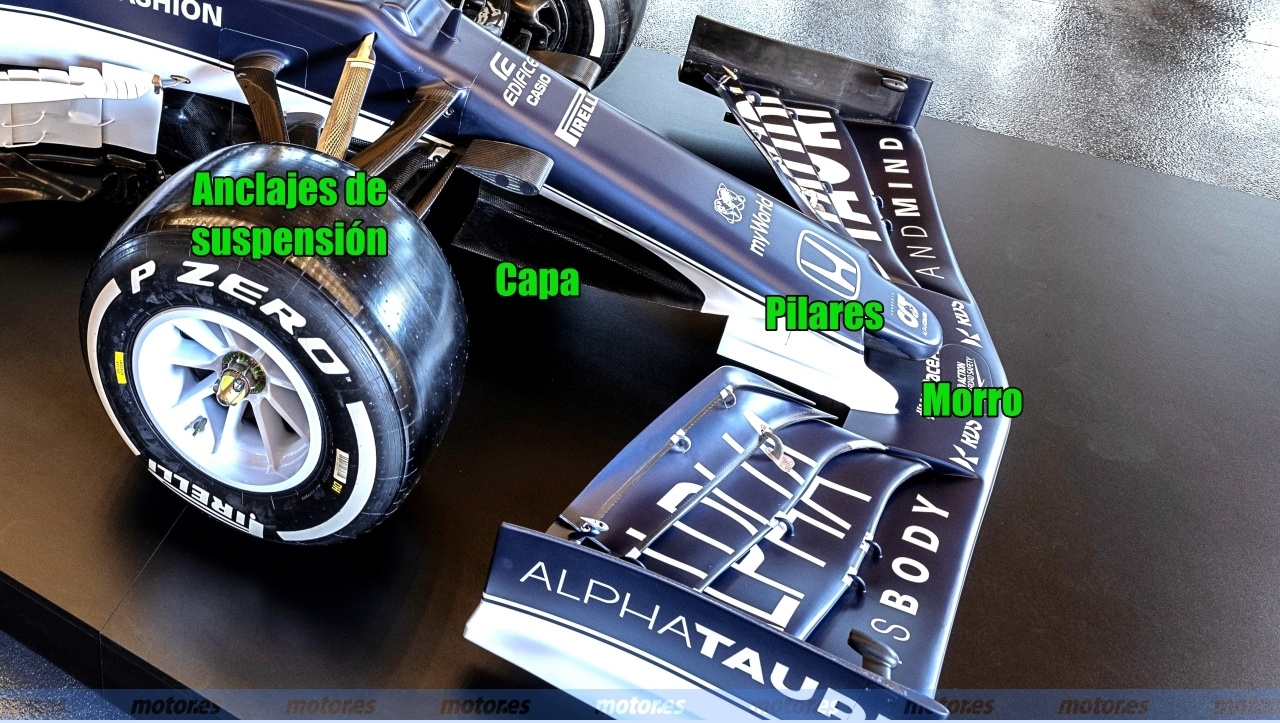 AlphaTauri has used its two tokens on the nose and front suspension.

AlphaTauri has decided to use its two tokens in a new nose and front suspension. In the first case, the tip of the nose is similarly shaped this year, but also somewhat shorter as its birth is delayed, which also makes the channels generated on its sides deeper. A simple a priori change, but one that requires a lot of work to successfully pass the FIA ​​crash tests.

Similarly, the front wing support pillars also change this year and the layer is incorporated under the aforementioned nose. Finally, the front suspension anchors change subtly, being now more compact and horizontal than those of the AT01.

In the part of barge boards and the side deflectors, in the rendered model there are some changes with respect to the car that ended the 2020 season and the one used in the physical presentation. 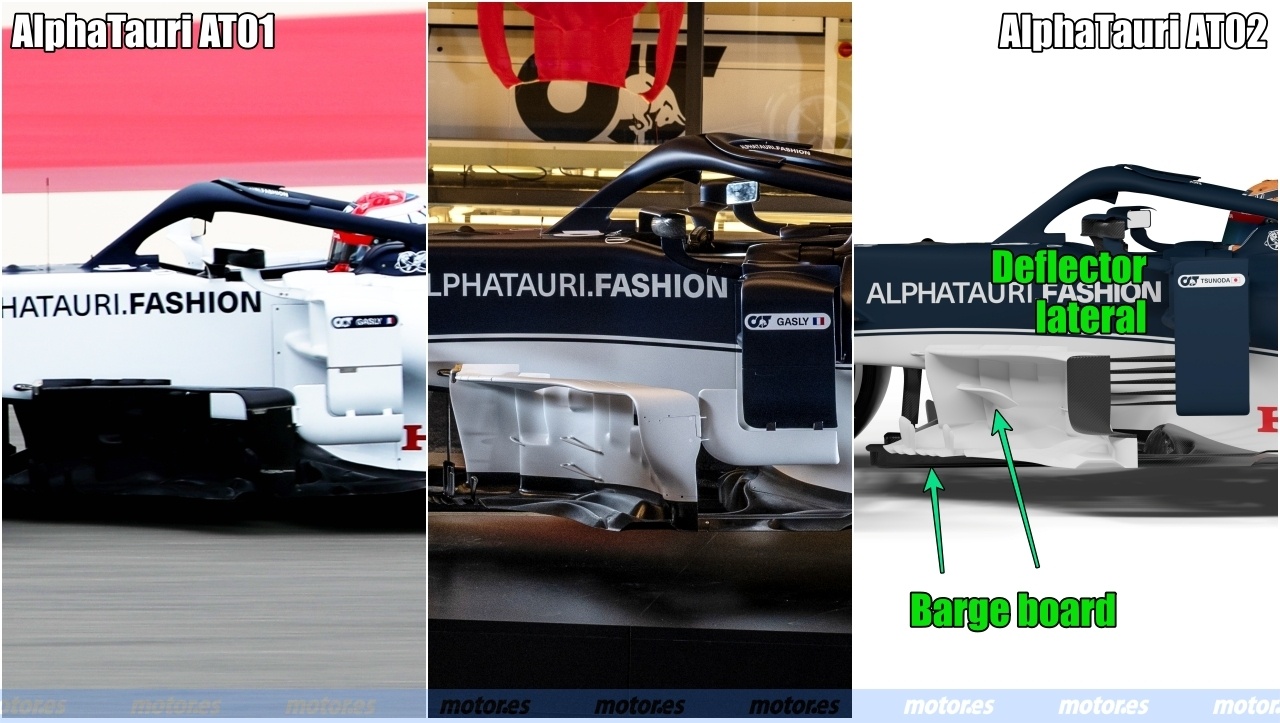 Some changes in the middle of the car, specifically in the barge board and the side deflector.

At the base of the barge board, we see how a pair of vertical fins have been implemented to redirect the aerodynamic flow from the lower central channel the nose and the Y250 channel, while in the vertical part a horizontal fin is added.

In the headline of this article we wonder what Honda hides and this is due to the modifications made to the rear half of the AT02. The engine cover it substantially changes its shapes and volumes, suggesting a considerable change in the internal packaging of the engine and the hybrid system, as well as the cooling of both. 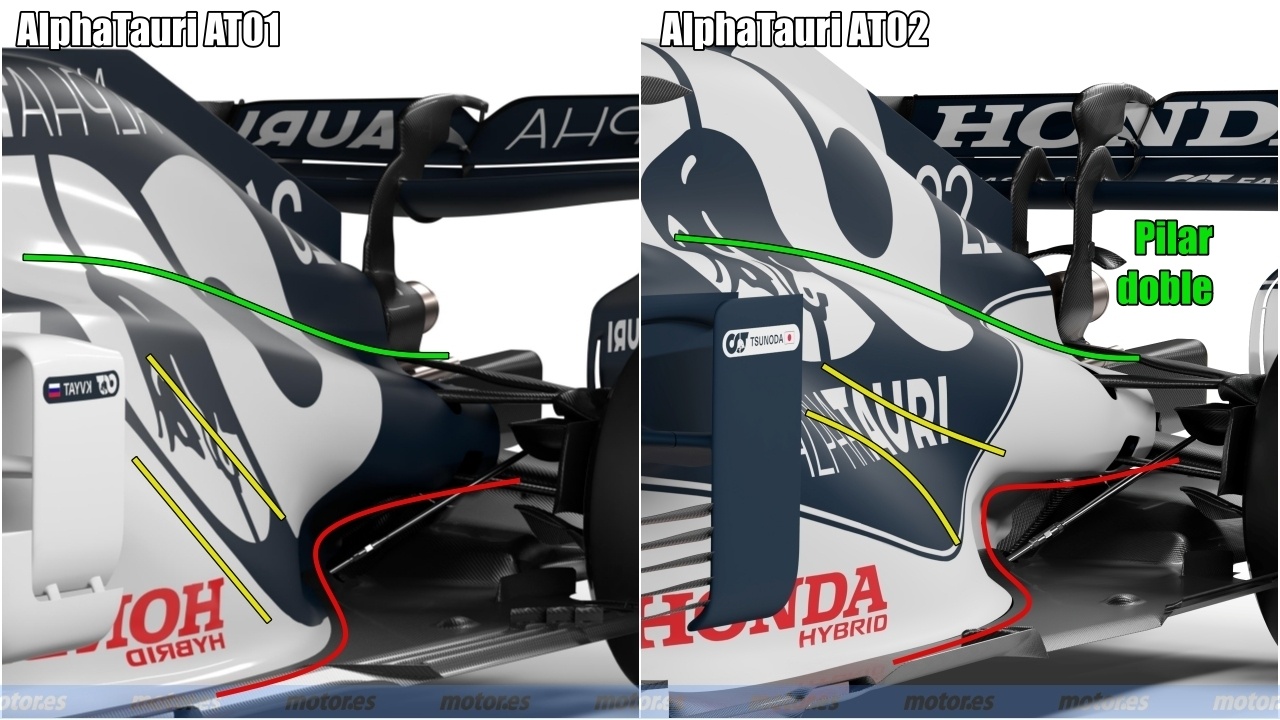 The pontoons and the engine cover are much tighter this year, has the Honda engine changed much?

As a result, the designers have chosen to radicalize the drop of the engine cover towards the front wing. (green lines), further sculpting the lower channel (Red lines) and creating a steeper descent on the pontoon (yellow lines). 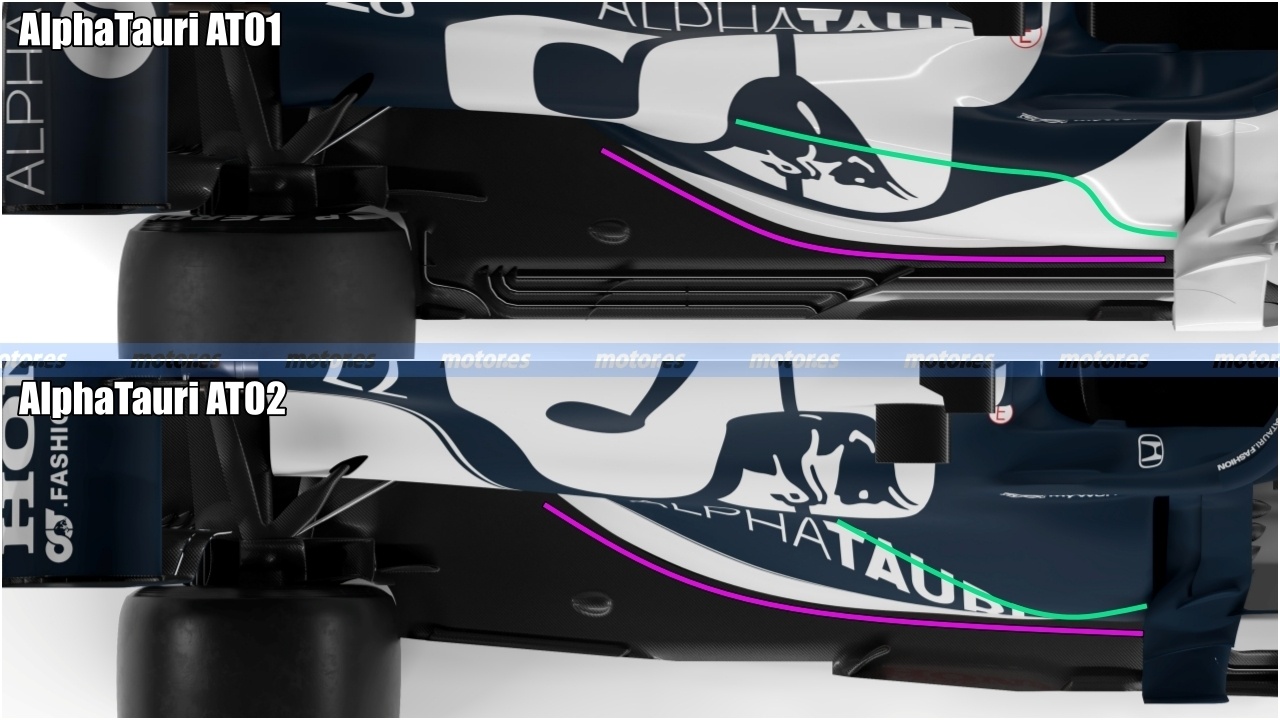 The aerial view allows us to see a lower and longer pontoon.

In this way, AlphaTauri tries to enhance the flows that circulate in the direction of the upper area of ​​the diffuser, which this year has lost potential as a result of the regulation (something that we can clearly see in the comparison with the AT01 of 2020. 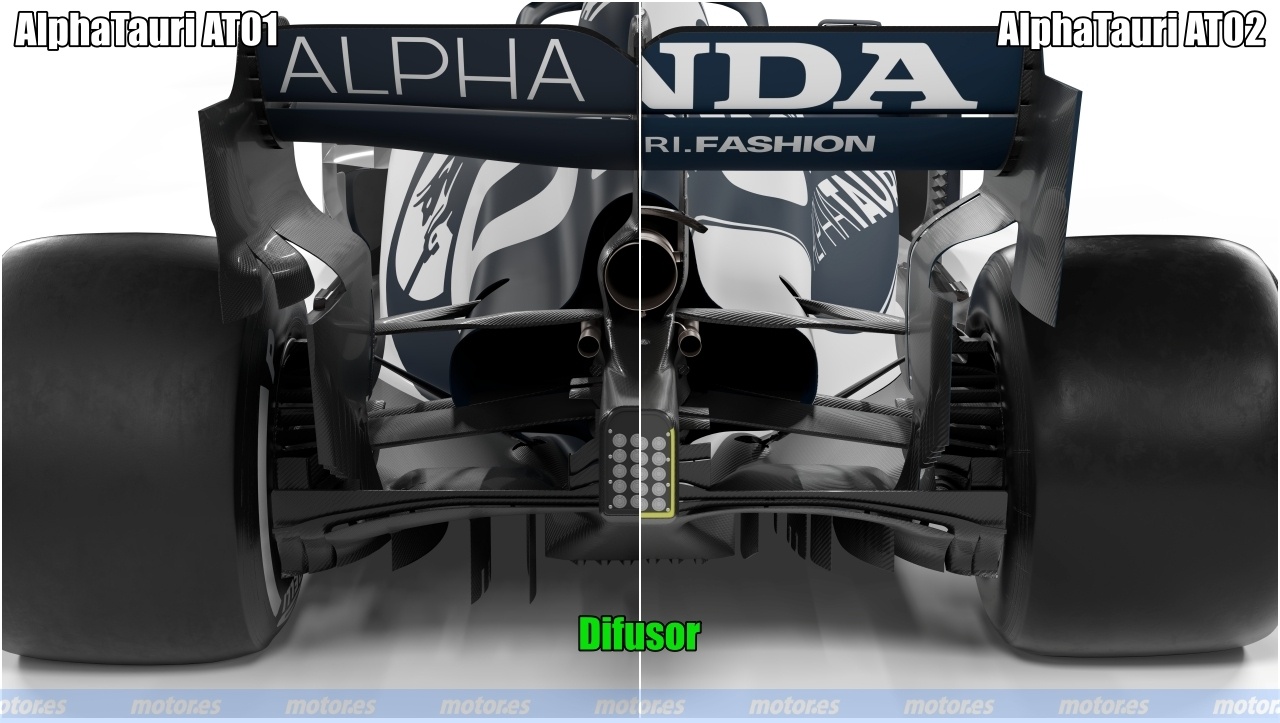 The diffuser now has smaller channels as a result of the regulation.

From the overhead view We can also see how the pontoon and the engine cover are now smaller and tighter, although also a little longer than last year. Finally, we can also check the effect of the regulation on the portion of the ground located in front of the rear wheel, which has lost area and, therefore, the ability to seal the diffuser and protect it from the turbulence created by it.