A new edition of Volkswagen Multivan arrives. We tell you all the details and photos of the new family icon.

The VW Multivan 2021 opens generation, all its photos and data.

With more than 70 years behind him, the Volkswagen multivan appears with a new generation that maintains the hallmarks that have made it an icon of the automobile. Bet on space, practicality and timeless design with great reminiscences of all its history. Arguments to which, in addition, we must now add a plug-in hybrid engine.

With the genes of the first Bulli, the Volkswagen Multivan maintains some modern lines that look to the past. On the side, a style line has been included which, in the case of choosing two-tone bodywork, also helps to separate the two spaces, providing a more classic touch. The led headlights, which can be converted to Matrix LEDs as an option, delve into a more modern look.

But one of the great changes of this new Volkswagen Multivan comes with the incorporation of the commercial vehicle to the well-known MQB platform. With this new structure, the vehicle grows in length and width, but loses some height. A) Yes, the final length is 4,973 mm (69 mm more), 1,941 mm wide (37 mm more) and the wheelbase is extended to 3,124 mm (124 mm more!). The height, meanwhile, is lowered by 47 mm, reaching 1,903 mm. The headroom, they say from Volkswagen, remains practically identical and even greater if you opt for the sunroof. In the case of opting for the long wheelbase, the Multivan grows to 5,173 mm, 131 mm more than the outgoing generation.

The VW Multivan has LED headlights as standard

But the big news comes with the plug-in hybridization. It is the first time that the Volkswagen Multivan has a block based on this technology, combining gasoline and electricity to reach the 218 hp. However, from the brand they have not published their final autonomy. The battery is 13 kWh and in their press release they point out that studies from Germany affirm that 95 percent of daily trips are less than 50 km. We will see if in the homologation they exceed the 40 km of autonomy that entitles us to the Zero emissions sticker in our country.

Notably all options mentioned are front-wheel drive, without the possibility of including the integral option. In the case of the plug-in hybrid, the gearbox is a six-speed DSG automatic, while in the combustion versions it is a seven-speed DSG gearbox. 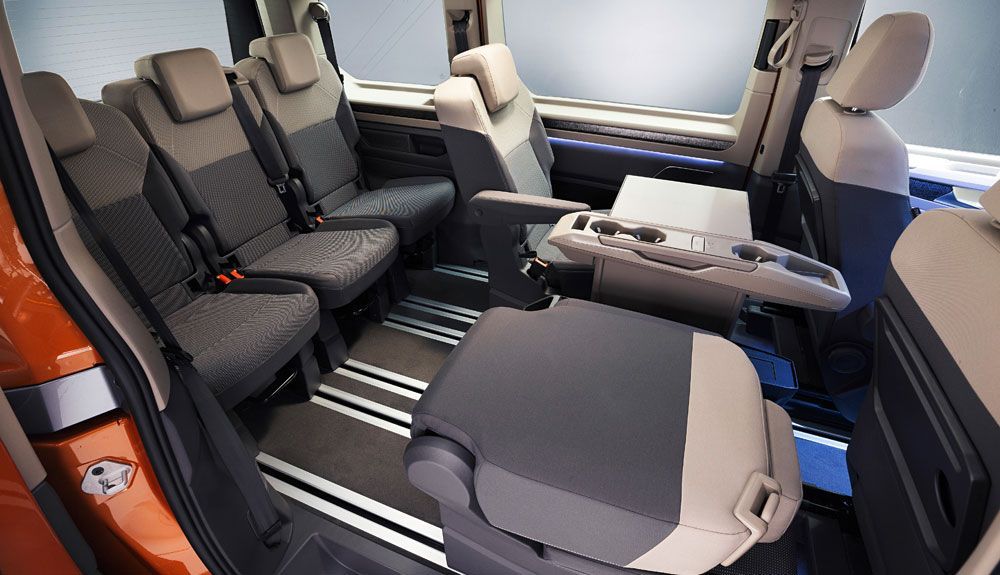 The individual seats of the seats expand its versatility

Regarding its equipment, The Volkswagen Multivan will have as standard with city emergency braking, lane maintenance system, cruise control and Digital Cockpit for the dashboard. For a greater variety of options, it is necessary to delve into its various equipment packages. The Multivan and Life packages have sliding doors with manual opening, while from the Style finish they can be improved with electric opening and closing.

To these options are added the new seats that in the second and third row are individual and have folding tables. In addition, by removing the rails and changing the seats to individual units, greater versatility is allowed when putting, removing and moving the seats. The option to make those located at the ends heated has even been added and now have seat belt use detection.

The versatility of the Volkswagen Multivan is expanded with 469 liters of trunk for luggage, expandable up to 1,844 liters (1,850 liters with the sunroof) if only the second row of seats is used and up to 3,672 liters if the two rear rows of seats are not used. In the case of the long wheelbase model, the figures reach 763, 2,171 and 4,005 liters, respectively.

As for his commercializationVolkswagen only mentions that it will start in the second half of the year and has not made its prices public.