Home>Entertainment>Movies>all about the Star Wars series on Disney +

One of the positive points of the Star Wars prequels directed by George Lucas is undoubtedly the signing of Ewan McGregor as Obi-Wan Kenobi. The Scottish actor took a new approach to the mythical character, putting himself in the shoes of Alec Guinness, but taking Kenobi much further. His relationship with Anakin was the centerpiece of the story and McGregor stood out above all else. It’s no wonder he’s one of the fan-favorite characters and that Dave Filoni featured him in his ‘The Clone Wars’ series.

For a long time a movie with the character was rumored, and although the rumors turned out to be true, the poor box office of the Han Solo spin-off threw the plans and Disney had to rethink the project … Serie. It was during Disney’s D23 event in August 2019 that McGregor himself confirmed that he was returning to the distant galaxy to sheathe the sword again. What do we know at the moment?

For now there is no release date set for ‘Obi-Wan Kenobi’, but we do know that filming will begin in April 2021, which leads us to think that the minimum will be the end of 2021 when it can land. Maybe even in 2022, because the schedule is a bit tight at Disney +.

Deborah Chow, who already participated in the ‘The Mandalorian’ series, is the showrunner in charge of bringing the ‘Obi-Wan Kenobi’ series to fruition. Joby Harold is in charge of rewriting the scripts. It is also executive produced by Kathleen Kennedy, Michelle Rejwan, Deborah Chow, Ewan McGregor and screenwriter Joby Harold.

The series will take place in six episodes, each of which will last about an hour.

Obviously, McGregor will return to the role he assumed in ‘The Phantom Menace’, ‘Attack of the Clones’ and ‘Revenge of the Sith’. A return that has the actor very excited, for working with Deborah Chow and for playing him again. “Enough time has passed since I played him before,” the actor told Empire. Furthermore, this return will allow him to “get closer and closer to how Obi-Wan felt while Alec Guinness interpreted it. I feel like I’m grayer and closer to him in age, so it’ll be easier to do that. “

On Investor Day, Disney announced that Hayden Christensen will also join the series, reprising his role as Anakin Skywalker / Darth Vader.. This news was received as a great shock among fans, a completely unexpected decision that promises to find redemption for the actor after having suffered the wrath of haters in his day. 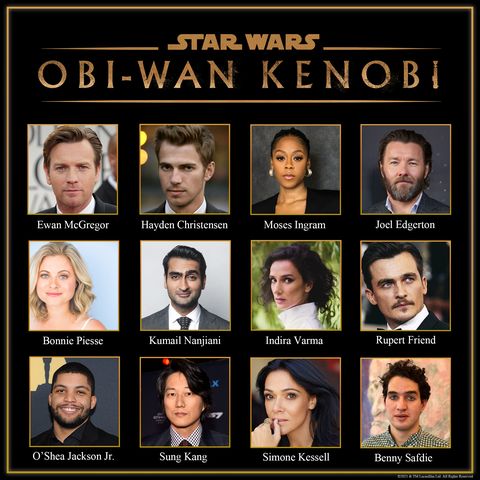 The story begins ten years after the dramatic events of Star Wars: Episode III – Revenge of the Sith, in which Kenobi suffered his greatest defeat, the fall and corruption of his best friend and Jedi apprentice, Anakin Skywalker, who became the evil Sith Lord Darth Vader.

“The Jedi Order was falling apart. It will be interesting to take a character that we know in a way and show him dealing with the fact that all Jedi were slaughtered with the end of Episode III. It is something that has to be overcome,” notes McGregor himself. .

In case you were expecting it, no, there will therefore be no connection with ‘The Mandalorian’, because although both series tread similar places, the series about the bounty hunter takes place after Episode VI.

For this we will have to wait a few months yet. Patience!

Star Wars gifts that are from another galaxy