Getty Alicia Machado lives a difficult challenge in her role as a mother.

Alicia Machado was very sincere when talking about the difficult stage that she lives with her daughter Dinorah Valentina as a consequence of her adolescence process. In a meeting with the media in Mexico, the Venezuelan interpreter stressed that it has not been easy to face the rebellion of her first-born.

“Right now I am having a hard time with my daughter, I am currently facing up to raising a teenage girl who is at the rebellious age. As a mother, I am in a situation where she is a teenager and the United States is very aggressive, there things are different as here in our Latin countries ”, Machado pointed out.

When questioned by reporters about the legal dispute between Marjorie de Sousa and Julián Gil for the custody of little Matías Gregorio, the actress said that she preferred not to comment on the matter because she is currently focused on her own problems with her daughter.

Alicia Machado emphasized that her first-born is a very noble girl who is currently surrounded by a lot of love from her relatives to be able to successfully overcome her rebellious stage during her adolescence.

Machado stressed that the support she has received from her loved ones has been key to being able to raise her daughter as a single mother: “Yes, you can, with a lot of love and often with the help of family and friends.”

The remembered Miss Universe 1996 became a mother with the arrival of Dinorah Valentina Hernández in June 2008.

In March 2021, Alicia Machado offered an interview to “Ventaneando” where she admitted that her daughter Dinorah Valentina has struggled with depression for several years. However, the situation worsened as a result of confinement due to the COVID-19 pandemic.

“Not only because of the pandemic, there is a phenomenon in the youth of the United States, more than all in adolescents between 12 and 14 years old, there is a deep depression among children that is emerging in these months of confinement and children have I have been very violent, depressed, sad and my daughter was touched by that group of children, “said Machado in the Mexican entertainment show.

The Venezuelan actress explained that she took action on the matter immediately after realizing that her daughter was suffering from depression, so the minor has been receiving help from specialists on the subject.

In April 2019, Alicia Machado shared a video on the Instagram platform to emphasize that being a single mom to Dinorah Valentina Hernández has not been easy at all.

“The children always want to have both parts, the father and the mother, in my case it has not been possible but hey, that’s life, let’s move forward. My girl is very intelligent, very loved, “said the star with tears in her eyes, remembering that her daughter has only had her support throughout her growth stage.

“God sent her to always be my shadow, my protective shield, my friend, my sun, my life, I love her,” added Machado to highlight the fundamental role that her daughter plays in her life.

Alicia Machado revealed the identity of her daughter’s father

In an interview with “Ventaneando” in June 2020, Alicia Machado broke the silence about the identity of her first-born father after years of speculation by the Spanish-speaking media.

According to the Mexican entertainment show, businessman Rafael Hernández Linares is the father of Alicia Machado’s daughter. At that time, the beauty queen asserted that she does not hide any kind of secret from her daughter. 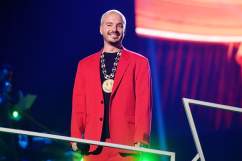