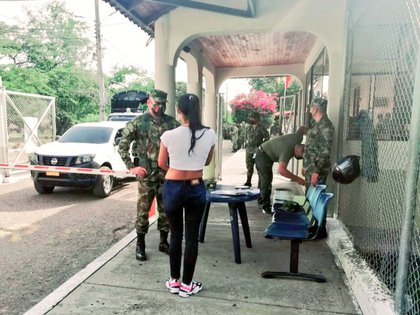 Photo: Sixth shelter of the Army.

Alias ​​’Sofia’, who claimed to be the sentimental partner of alias ‘Raúl’, head of the residual Organized Armed Group of the Adán Izquierdo Central Joint Command, was delivered to the facilities of the Infantry Battalion No. 16 Patriotas, belonging to the Sixth Brigade of the National Army.

According to La FM, alias ‘Sofía’ has key information about the terrorist projections, the political claims, identification of financial plans, the mass organization and the composition and strength of the substructure considered as an articulator of the armed groups that operate in the south of the department of Tolima.

As of the delivery date, aka ‘Sofia’ is accompanied by the Sixth Brigade of the Army in accordance with the guidelines established in Directive No. 14 of October 28, 2020, as it was linked to the process of individual submission to justice admitted by the National Government in Decree No. 965.

Raúl Pinto Portela, Alias’ Raúl ‘o’ Alexander, head of the armed group in Tolima, was captured on June 2 of this year. According to Ricardo Osorio, governor of the department, the detainee had a long history in the Farc guerrillas and had pending debts with the justice. In addition, it indicated that it operated in the Cajamarca corridor.

According to the authorities involved in the operation, alias ‘Raúl’ joined the guerrilla in 1995. From that date, it belonged to the mobile columns Heroes of Marquetalia until 2009 and Jacobo Frías Alape in 2006 from the armed group. He was the leader of the armed group since 2019. Because of this, he was on the department’s most wanted list.

The capture process was carried out at a checkpoint located between the municipalities of Anzoátegui and Santa Isabel, Tolima department in a operation between soldiers of the Infantry Battalion No. 16 Patriots of the Sixth Brigade of the National Army and agents of the Tolima Police. An AK 47 rifle and three suppliers, a revolver, six 38 mm ammunition and 93 39 mm caliber ammunition were also seized.

He is currently in the Picaleña prison. The head of the commission ‘Tulio Varón’, was wanted for the crimes of conspiracy to commit aggravated crime; manufacture, trafficking and carrying of weapons; simple kidnapping Y prisoner escape. It is also accused of recruiting people and forced displacement.

According to the Prosecutor’s Office, he was also prosecuted for his alleged participation in the homicide of the environmental social leader Carlos Aldairo Arenas Salinas in October 2019. The evidentiary material indicated him as the executor of the murder in which more people also participated. The leader was a recognized protector of the tourist route ‘Ruta del Cóndor’, known for being the favorite place for the sighting of this bird in the páramo area. The crime, said the accusing entity, was carried out due to the complaints from Arenas Salinas about the presence of illegal armed groups in the area.