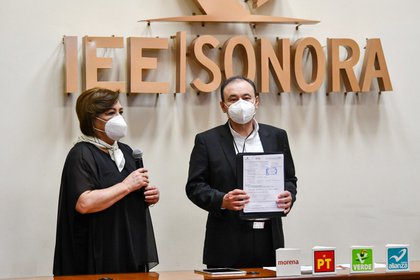 The president counselor of the IEE is the cousin of the delegate of the federal government, Jorge Taddei Bringas (Photo: Twitter / @ IEESonora)

“East It is the greatest honor I have received in my entire political career, in the maturity of my life I can tell you that I am not moved by anything material in the task entrusted to me“Said the Sonoran.

At the headquarters of Sonora State Electoral Institute, Durazo Montaño introduced himself as common candidate before the presiding counselor Guadalupe Taddei and the rest of the directors, as well as the Executive Secretary of the department. He delivered the corresponding documentation a couple of hours after taking the protest as a PT candidate. 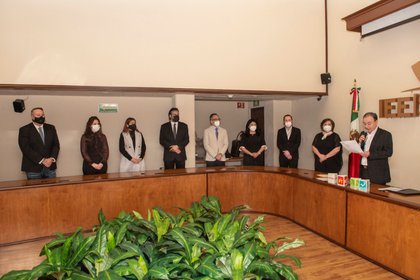 Durazo defined himself as a son of deep Sonora (Photo: Twitter / @ IEESonora)

Mario Delgado Y Citlalli Hernandez, top leaders of Brunette, were present at the event; the same as Magdalena Núñez, national commissioner of the PT, as well as Karen Castrejón Trujillo, president of the Green Party in Mexico.

When taking the floor, the candidate first thanked his family and he remembered his parents, who recently passed away from COVID-19. He reviewed his biography and defined himself as a “son of deep sonora”.

He highlighted his career in different positions, since he worked with Luis Donaldo Colosio until his assignment in the Secretariat of Security and Citizen Protection, where he was in the current management of Andrés Manuel López Obrador, from December 1, 2018 to October 30 of last year. 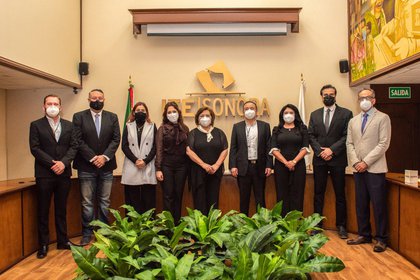 The former secretary highlighted that all the problems of the state have been due to the corruption of the PRI and the PAN (Photo: Twitter / IEESonora)

“I was trained alongside giants of our public life, I am particularly honored by my status as close collaborator of Luis Donaldo Colosio and, of course, the very honorable collaboration I had in the president’s cabinet Lopez Obrador”, He said when omitting his step as spokesman for Vicente Fox.

Already in his diagnosis on the situation of the entity, assured that inequality has become uncontrollable and poverty has increased, as well as the poor quality of public services; Furthermore, he said that Sonora is in a historical decline in competitiveness, institutions are rotten and public finances are in a condition of “intensive therapy.”

“We have a political time in which it is essential to update, at least, 30 years behind our state”, He asserted.

On the other hand, took the opportunity to attribute all these problems to the governments of the Institutional Revolutionary Party, as well as the failed alternation of the National Action Party, who will compete together in the elections on June 6 with Ernesto Gándara Camou in front. 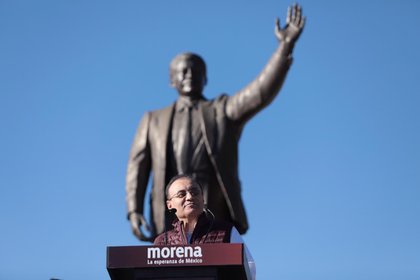 The Sonoran began his campaign in Magdalena de Kino, where Colosio was born (Photo: Twitter / @AlfonsoDurazo)

Durazo barely mentioned the levels of insecurity and emphasized the corruption entrenched in power.

“The patrimonial philosophy of the PRI it was adopted by the PAN once in power, only in a way more wild and voracious. The PRI members of Sonora would say about their now allies: ‘the PAN They came to steal like they thought we stole‘. Today they agree hypocritically smiling at public events, when just a few years ago faces were seen in public ministries and courts, wallowing in the mud of their own corruption, “he attacked.

In the state of Sonora 106 positions of popular election will be voted, among them deputations, city councils and one of the 15 governorships of the federation, but there are more. The more than 2 million Sonoran residents on the electoral roll will be able to vote for 21 councils with a relative majority, 72 municipal presidencies and 486 regidurías. 72 receiverships and 12 proportional representation councils will also be renewed.

“I’m not going to fail you, my friend”: Alfonso Durazo’s hopeful promise to Luis Donaldo Colosio at the beginning of his campaign in Sonora Moreno and Nueva Alianza also registered Alfonso Durazo as a candidate for governor of Sonora Position of brother-in-law Alfonso Durazo at the Electoral Institute of Sonora does not put the fairness of the election at risk: Guadalupe Taddei