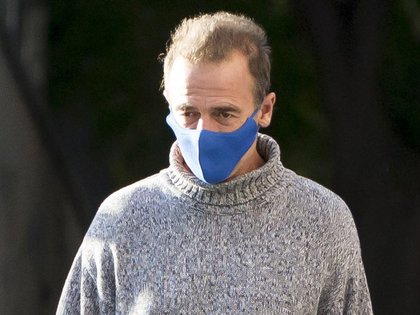 10/14/2020 Alessandro Lequio, in an archive image, always remembers his son Aless, with whom he had a very special relationship EUROPA ESPA A SOCIEDAD

This Wednesday all Spaniards woke up with the exclusive of Ana Obregón in the magazine ¡HOLA! speaking six months after the death of his son Aless Lequio. The pain of a mother who has lost her only child made our hair stand on end and many were those who needed to rest to catch the air when reading the heartbreaking words of the actress. Alessandro Lequio, for his part, was visibly excited in his program and assured that he wanted to continue to remain discreet publicly.

Despite not having publicly spoken of the pain he feels as a father, the television collaborator does get used to uploading content to his social networks remembering his son and today is one of those days. Conde Lequio has posted a photograph of Aless Lequio playing basketball with an emotional message: “flying always flying”.

In this way, María Palacios’ husband makes it clear that the memory of his son is still present, flying all over the world. And it is that the life lesson that the young man gave his parents by the way he had to face the disease was exemplary and that is part of the legacy that the businessman has left on earth.

One more Saturday, Alessandro Lequio wanted to remember his son on his social networks with a very concise message and that’s how he is. Let us remember that when he started working after the death of his son, he barely made any statements and that, despite carrying the pain inside, his feelings fly with the soul of his son.