Alberto Fernández spoke about the pandemic at the G20 summit

President Alberto Fernandez He participated this morning -from the Chapadmalal Residence- in the G20 Leaders’ Summit that is held virtually from Riyadh, Saudi Arabia. There he reiterated his proposal, already outlined last March, on the creation of a Global Solidarity Pact and a Humanitarian Fund to face the global impact of COVID-19.

“We see what happens in Europe very carefully. We warn that the risk of the second wave also exists in Latin America, that what is happening in Europe is very possible, that happens with the arrival of autumn and therefore we have the opportunity to get that vaccine that immunizes our society in Latin America “, indicated Fernández

And he remarked: “We must persist in the possibility of guaranteeing the vaccine to all humanity.”

In another section of his speech – which lasted about nine minutes – the Argentine president emphasized the global asymmetries that were deepened by the effects of the pandemic. He also assured that from Argentina expansive fiscal policies will be established. In that context He asked the multilateral organizations to do the same to get out of the crisis.

The Minister of Economy, Martín Guzmán, accompanied the president in his speech

“We proposed to create a global health emergency fund. I see with satisfaction, the English Prime Minister (Boris Johnson) put it very well, that what began as an individual experience of each one of us became a space of solidarity where we begin to listen to the experiences of each one to see from where to travel the pandemic”, Indicated Fernández.

And he continued: “I think I’m the first to speak from a slightly different place. I am going to talk a bit about how developing countries have experienced the pandemic. Countries that also have a conflict with the real debt. I am sure that the pandemic offers us a unique opportunity. It is very clear that in the world in which we lived it was not an essentially fair world. It was a world with many inequalities. It is a great opportunity to change the way the world works, “said the President at the beginning of his speech.

“We have things to do and to assume. We have the firm decision to implement active public policies to contain, support and boost the economy and maintain financial stability.”Said the President.

Fernández’s speech was a few minutes after 11 (our country time) by videoconference. This Saturday the deliberation at the world forum that brings together 20 of the main developed countries and also several emerging nations and the most important multilateral organizations in the world has as its axis the motto “Overcoming the pandemic and regaining growth and jobs”. Will continue tomorrow with “Building an inclusive, sustainable and resilient future.” There will also be two side events. Today’s on preparedness and responses to the pandemic. Tomorrow, around climate change and its consequences. 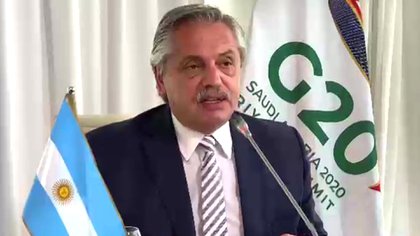 “There is a second challenge: in this concept of equality we have to work on things that were discussed here. Improve gender equality, accept living in diversity. And also understand, once and for all, As the Prime Minister of India (Narendra Modi) has said, that we are the guardians of this world that we inhabit. And that we have to finish destroying it as has happened until now. And that the climate has changed and is alerting us to assume a new logic of environmental care policies, ”said Fernández.

These proposals had already been raised by the Argentine president in an extraordinary meeting held at the end of March and virtually, and were reiterated in recent days by the Argentine Sherpa and ambassador to the United States, Jorge Argüello, through his official Twitter account. Sherpas are the advisers appointed by each Head of State to receive advice and their work is key to harmonizing positions and for the drafting of the final document of this multilateral meeting.

“We have the possibility of obtaining that vaccine that immunizes our society in Latin America. Argentina has worked with all vaccine suppliers. With the American laboratories, with the University of Oxford. I want to give a special thanks to the President of the Russian Federation, Vladimir Putin, because we have worked hard so that the Russian vaccine reaches Argentina in a timely manner. And we are progressing, thank God, very well, ”the president emphasized.

Since that opportunity, when due to the rapid expansion of the coronavirus at the global level, that extraordinary meeting of the G20 was held, also in virtual mode, more than a dozen Extraordinary Meetings were held at ministerial level, in this which is the 15th meeting of the forum, in the fields of Commerce, Energy, Agriculture, Employment, Tourism, Digital Economy and Education. 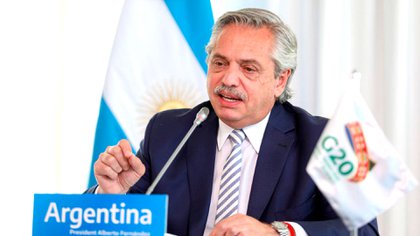 The Argentine position, outlined by the president, was upheld in recent months in the different areas of the G20, as well as in the meeting of foreign ministers, held in September, and in which the foreign minister participated. Felipe Solá to ratify the support of the Argentine government for multilateralism, the need to strengthen global cooperation and fight inequalities, especially in a context of global uncertainty in the face of the pandemic.

The G20 was born in 1999 as a technical meeting of finance ministers and central bank presidents. In the middle of the economic crisis of 2008, it became what it is today: a key space for discussion and decision-making in which the top world leaders and major economies participate. Together, its members represent 85% of global gross product, two-thirds of the world’s population, and 75% of international trade. For the first time its annual meeting is held in an Arab country. It is a forum whose permanent members are 19 countries from all continents plus the European Union (EU) as a whole. It is made up of Germany, Saudi Arabia, Argentina, Australia, Brazil, Canada, China, South Korea, the United States, France, India, Indonesia, Italy, Japan, Mexico, the United Kingdom, Russia, South Africa, Turkey and the EU.

Alberto Fernández will travel to China next year: he will meet with Xi Jinping to strengthen bilateral relations

A Russian delegation sent by Putin arrived in Buenos Aires to define the agreement for the Sputnik V vaccine with the Argentine government.