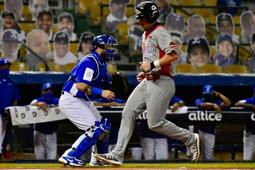 The Tigres del Licey once again had the Leones del Escogido, this time with a score of 5-3, in a match held this Tuesday night at Quisqueya Juan Marichal Park, corresponding to the Dominican winter baseball tournament that pays tribute to Don José Manuel Fernandez.

The victory went to Gabriel Arias (1-0), who allowed a touchdown in two chapters, while Jairo Asencio scored his first save of the campaign. Rhiner Cruz lost (0-1).

A solo home run by Wander Franco in the sixth inning to take command of the game was not enough for the Leones del Escogido to avoid falling to the Tigres.

Franco’s slam, 364 feet away on the right-field wall, was his first in the scarlet uniform and came against Gabriel Arias.

The races
The Lions attacked in the same first inning with a double from Chas McCormick to right field, who moved to third on an error by second baseman Pablo Reyes on a hit by Franco. A sacrifice fly by Nate Lowe to center pushed McCormick with the first red line.

At the bottom, the Blues tied when Jorge Bonifacio singled through the middle of the field, which brought his brother Emilio to the plate from the anteroom.

The Scarlets returned to the front but Licey responded again in the bottom half with a home run by Michael De la Cruz to tie the game 2-2. Then, a double by Anderson Tejeda to the right field and a shooting error by third baseman Jim Haley caused the third line of the indigo, who scored one more in the seventh and another in the eighth.

The Lions made one more in the ninth, but couldn’t rally hit and at least extend the game into extra innings.