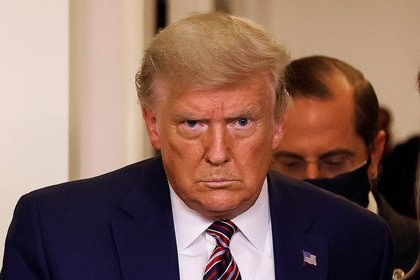 WASHINGTON, Nov 22 (.) – Following a severe judicial setback in Pennsylvania, pressure mounts from Republican party figures on President Donald Trump to abandon his efforts to overturn the US presidential election and bow to Democrat Joe Biden. .

Since Biden was declared the winner two weeks ago, Trump has launched a barrage of lawsuits and mounted a lobbying campaign to prevent states from certifying their total votes.

So far, attempts to block the certification of such results have failed in the courts of Georgia, Michigan and Arizona.

For Trump to have any hope of staying in the White House, he needs to eliminate Biden’s 81,000-vote lead in Pennsylvania. The state should begin certifying its results on Monday.

Trump’s lawyers promised a speedy appeal, but those who opposed him in court say the president is out of time.

Some of his fellow Republicans in Congress are now leaving his ranks.

Republican Sen. Pat Toomey said this ruling closed off any chance of a legal victory in Pennsylvania and asked Trump to back down to the election result.

TRUMP REFUSES TO GIVE UP

Biden obtained 6 million more votes than Trump in the November 3 elections, and also prevailed with 306 Electoral College votes against 232, which are those that determine the winner and who will take office on January 20.

The president-elect has spent the past few weeks preparing to take office, though the Trump administration has refused to provide funding and security clearances to do so.

Critics say Trump’s refusal to compromise has serious implications for national security and the fight against the coronavirus, which has killed nearly 255,000 Americans.

To stay in office, Trump would have to somehow annul the election results in at least three major states, a feat unprecedented in American history.

The count carried out in Georgia confirmed Biden’s victory in that state, the result of which was ratified on Friday. Trump’s campaign team, for its part, said Saturday that it would request another recount.

In Wisconsin, election officials have criticized the Republican candidate’s volunteers for delaying a partial recount, though the result of which is not expected to nullify Biden’s victory.

Election officials across the country say there is no evidence of significant electoral fraud, and the Trump administration itself has called this election “the safest in American history.”

But Trump’s accusations have continued to ignite his Republican base. Half of them believe the election was stolen, according to . / Ipsos polls, and their supporters have held rallies across the country to protest the result.