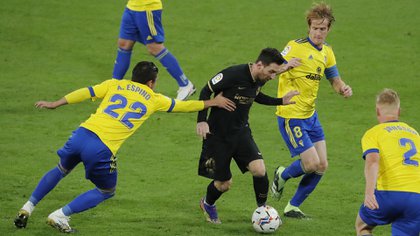 Barcelona will host Cádiz at the Camp Nou (.)

After the hard blow of reality that suffered against Paris Saint-Germain for the first leg of the knockout stages of the Champions League, Barcelona resumed its complicated path in La Liga, where it has placed almost all its hopes of saving the season, receiving to Cádiz at the Camp Nou.

The 0-2 that he suffered against Sevilla in the first leg of the Copa del Rey semifinals and the 1-4 that PSG endorsed him this Tuesday, left Barça in a critical situation with regard to their way in the competitions.

Despite the bad results in the cups, the Catalans have seven consecutive victories in the league championship and, still 9 points behind the leader, Atlético de Madrid, they are reluctant to give up their options to fight for the title.

The only good news from the last European game was the recovery of central Gerard Piqué, who started three months after injuring the ligaments in his right knee. However, Koeman, who is still unable to count on the injured Ronald Araujo, Sergi Roberto, Ansu Fati and Philippe Coutinho, will make some changes to host Cádiz.

The most likely is the return of Oscar Mingueza to the axis of the rear, to dose the return of Piqué or as a relief of Sergiño Dest on the right side.

Miralem Pjanic, for Sergio Busquets in the defensive pivot position, or Martin Braithwaite for Antoine Griezmann in the attack point could also be other novelties in the eleven.

Cádiz, meanwhile, is at its worst of the season, with four consecutive defeats in which they have conceded fifteen goals. Álvaro Cervera’s team has not yet joined in the second round and is approaching the relegation places.

Cádiz today is very different from the one that beat Barcelona at the Carranza stadium (2-1) in early December. In fact, that was the penultimate game that Cervera’s men won and since then eleven days have passed, in which the people of Cadiz have only added six points out of 33 possible.