The 2020 Peugeot 3008 is the restyling of the model presented in 2016. It offers two gasoline and one diesel engines, as well as two plug-in hybrid variants. It is available in Spain from 27,300 euros, while the electrified variants start at 39,000.

The Peugeot 3008 2020 It is the intermediate SUV of the lion brand, larger than the Peugeot 2008 but smaller than the Peugeot 5008. It was born from the modular platform EMP-2 from the PSA Group, which represents a saving of 100 kilos compared to its first generation, which originally debuted in 2008.

The rivals of the Peugeot 3008 are models like the Volkswagen Tiguan, the Renault Kadjar or the Seat Ateca.

The restyling presented in September 2020 mainly affects the exterior of the SUV, updating its design language to introduce characteristic features that the company’s customers have already been able to appreciate in recent times in the Peugeot 208.

The most renewed aspect is the front, which adapts the same philosophy of the 208 by expanding the grille and lengthening it to the lower end of the lights, and adopting new vertical daytime running lights that are already typical of the company.

The same treatment is applied to the rear, which receives the claw-shaped taillights, also as in the 208. These are standard LEDs on all versions of the model.

In the lateral silhouette, the SUV receives alloy wheels up to 19 inches. 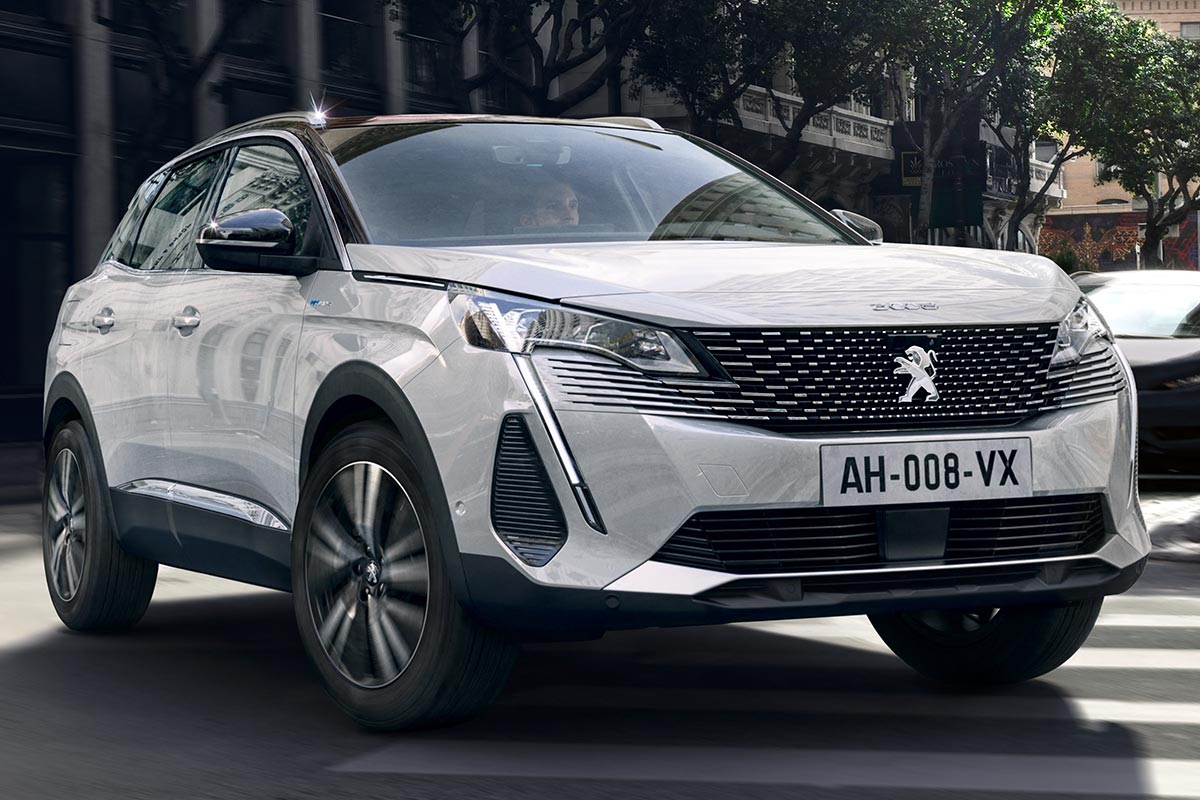 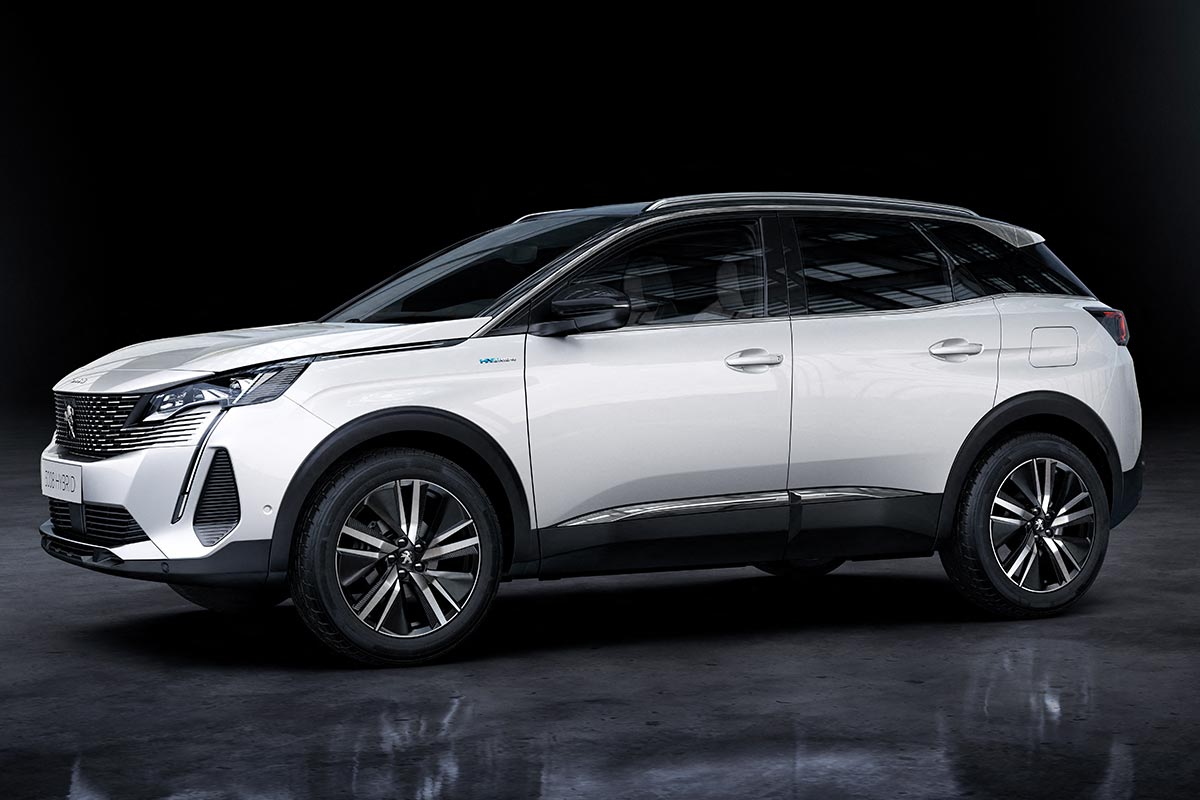 The Peugeot 3008 2020 keep the i-Cockpit, which has already become the hallmark of the French company. The 2020 restyling introduces a new 10-inch digital display for the center console – it previously had 8 – and a new digital instrument panel to replace the old one, in an effort to update the vehicle’s technology.

Drivers can now opt for a new wood trim for the dashboard, as well as new upholstery for the seats.

The infotainment system is compatible with Apple CarPlay Y Android Auto. It offers a 520-liter boot, a figure higher than most of the competition except in the case of the Tiguan, which equals it. In the plug-in hybrid versions, this figure drops to 395 liters. 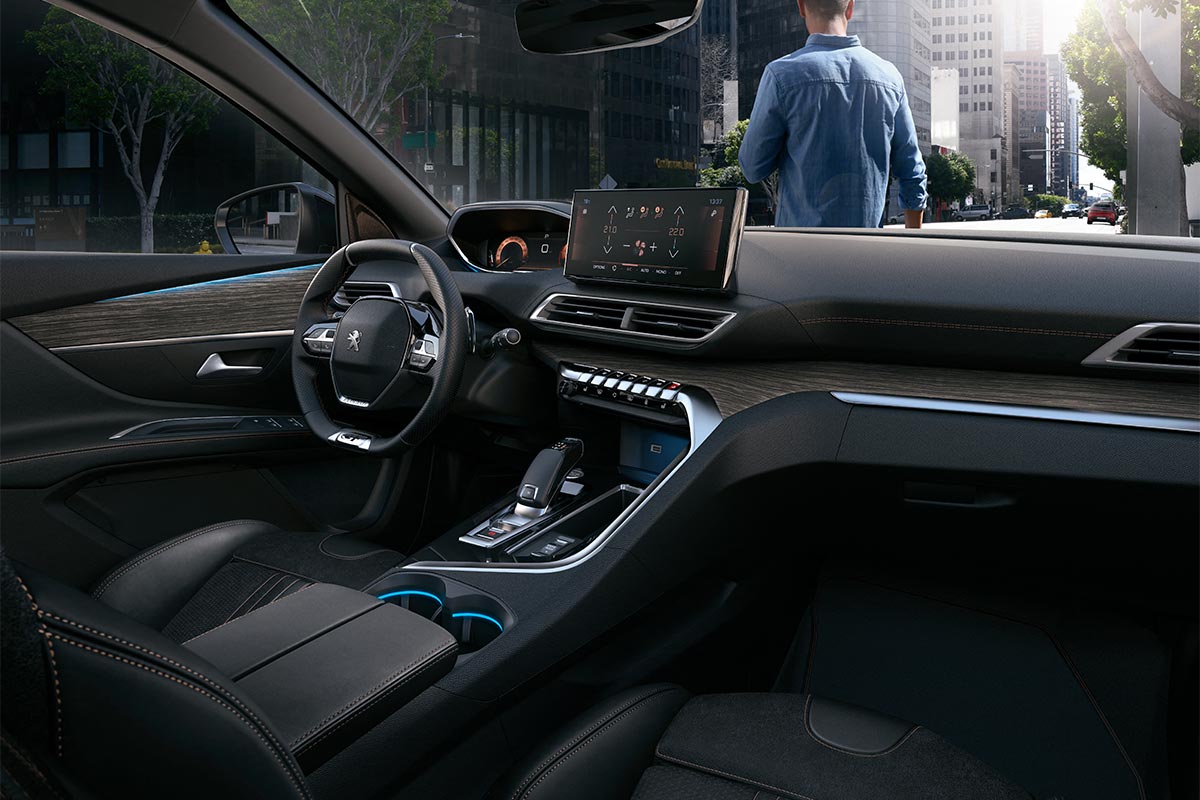 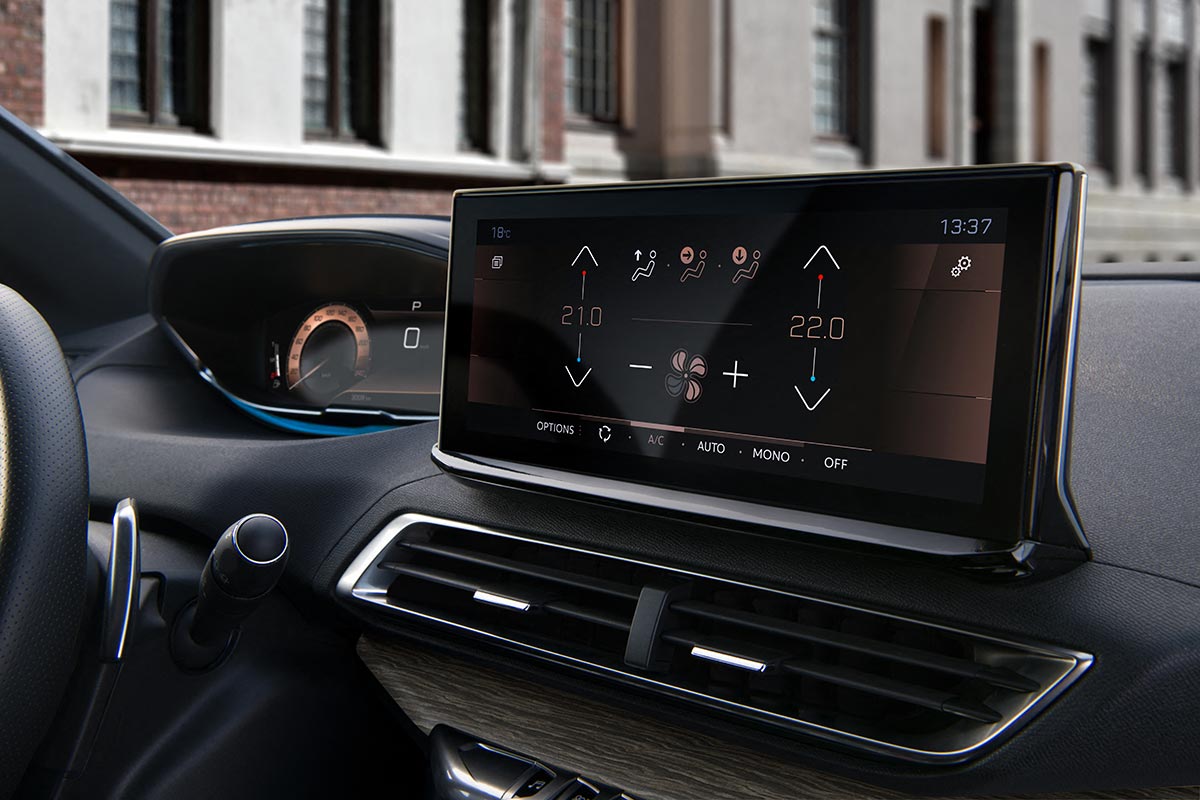 The Peugeot 3008 It offers four trim levels, which are the Active, the Allure, the GT Line and the GT.

Among the devices that can incorporate the SUV French we find the reversing camera, the set of cameras that generate an overhead view of the 3008 –officially it is called Visio Park–, some front seats with massage function, LED lighting on the panoramic roof or a LED lighting system with connection and automatic disconnection of the main beams.

Optionally, a Focal-signed sound system can be included, in addition to the Driver Sport Pack, which allows the driver to change steering response, accelerator pedal sensitivity and gearbox speed on automatic versions. This package also amplifies the sound of the engine through the speakers.

Regarding driving aids, the Peugeot 3008 You can equip the adaptive cruise control with a stop-start function for versions with automatic transmission, the vehicle blind spot detector, a semi-automatic parking system or the alert for involuntary lane change.

The Peugeot 3008 is available with two gasoline engines, one diesel and two plug-in hybrids.

In gasoline, part of a 1.2-liter three-cylinder engine that delivers 130 horsepower. It can be associated with a six-speed manual transmission or an eight-speed automatic.

The most performance option is a 1.6-liter four-cylinder engine that rises to 180 horsepower. This is only available with an eight-speed automatic transmission.

In DieselIt has a 1.5-liter four-cylinder engine that produces 130 horsepower. It has Start & Stop technology and is associated with an eight-speed automatic transmission.

How plug-in hybrid, the 2008 access option is Hybrid 225, which produces 225 horses that are born from the 180 horsepower gasoline engine and a 110 horsepower electric drive. The eight-speed gearbox is automatic. Two driving wheels. It has 56 kilometers of electric autonomy with a 13.2 kilowatt-hour battery.

The most performing variant is the Hybrid 300, the only one with all-wheel drive and that delivers 300 horsepower that comes from a 200 horsepower gasoline engine and two 110 and 112 horsepower electric motors mounted on the front and rear axles respectively. The eight-speed automatic transmission has 59 kilometers of autonomy without emissions and a 13.2 kilowatt-hour battery. 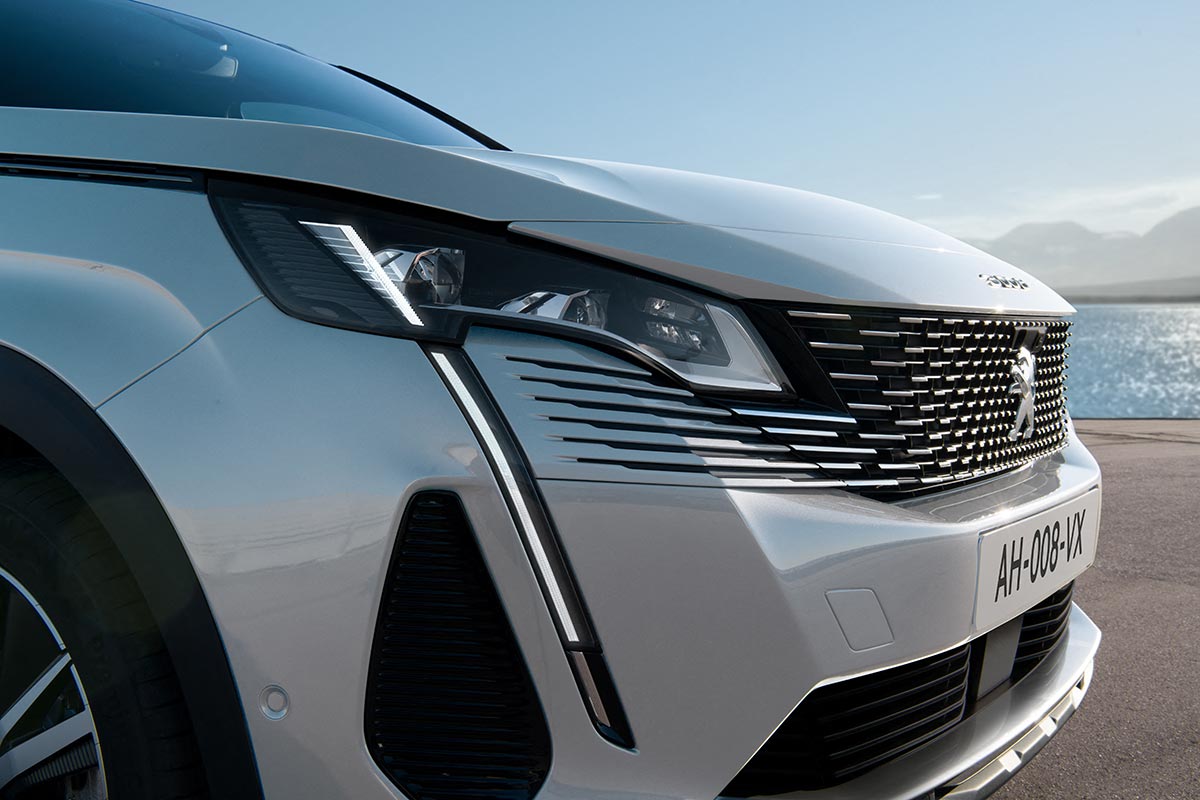 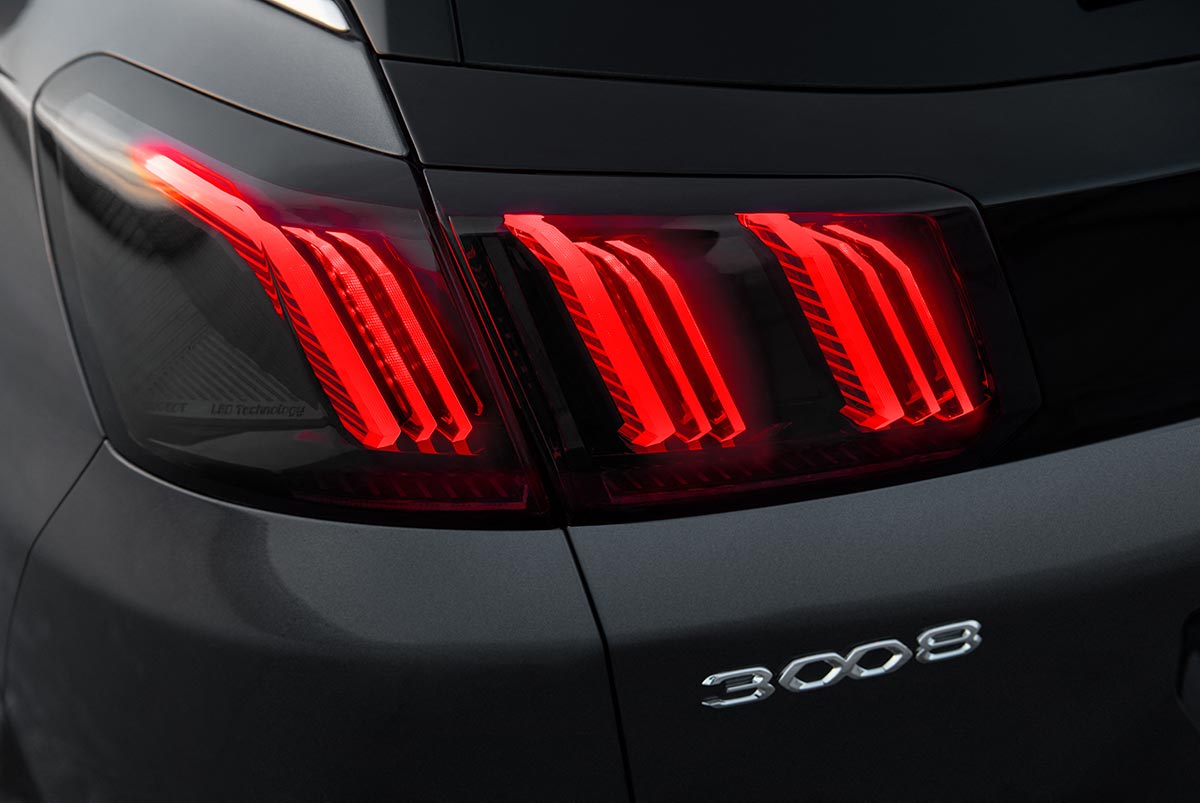