The Toyota Mirai is unveiled in the United States with an aesthetic very similar to that of the prototype from which it comes. The first technical data point to a power of 182 horses and a range of 850 kilometers.

The Toyota Mirai 2021 It is the second generation of the Japanese hydrogen car. Its prototype version was presented at the 2019 Tokyo Motor Show. The production variant will arrive in Europe before the end of 2020, presumably during the month of December. So far, he has shown his face in the United States

The Toyota Mirai 2021, what part of the platform TNGAIt will have very similar or perhaps exact measurements to those of the ‘concept’. It is expected, therefore, that it announces 4.97 meters long, 1.89 wide and 1.47 high, in such a way that it will be almost 10 centimeters longer, 8 wider and 8 lower than the current Toyota Mirai . The wheelbase will be 2.92 meters.

In America at least, the car will offer a choice of 19-inch or 20-inch wheels.

The colors available in the American country for the body are five: blue, white, red, gray and black.

The advance of Toyota Mirai Concept It is also palpable inside, where a double digital screen appears that replaces the central one of the current model. In the case of the one for infotainment, the designers have confirmed a size of 12.3 inches. The one on the dashboard is 8 inches.

The infotainment system is compatible with Apple CarPlay, Android Auto, and Amazon Alexa. 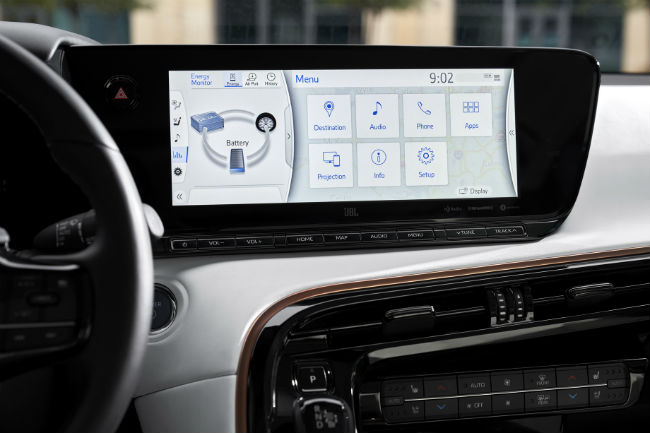 The new Mirai offers the package Toyota Safety Sense 2.5+, which includes elements such as a more intelligent Pre-Collision System with pedestrian detection that can also see bicyclists and even a vehicle or pedestrian approaching an intersection when making a left turn; a cruise control with dynamic speed radar that can be activated at more than 30 miles / hour and can bring the car to a complete stop if necessary; traffic sign detection or lane departure warning.

Toyota has not yet confirmed the mechanical data of the second generation Mirai, although it has long been leaked that its engine has 182 horses power and maximum torque of 300 Newton meter. It represents a considerable increase in power compared to the 154 horses of the first generation, which nevertheless announced 335 Newton meters of torque.

The new model has three hydrogen tanks that will allow a range of 850 kilometers. It is still unknown under which protocol this figure has been reached. Toyota, however, ensures that this second-generation Mirai increases by 30% that of the outgoing model, which advertised 550 kilometers according to NEDC.

We also know that Toyota will reduce platinum use by two-thirds for your fuel cells. In this way, approximately 10 grams of this material will be used by the next generation instead of the current 30. The reason for having investigated to achieve this breakthrough is the shortage of platinum on our planet.

11/04/2020
The first technical data of the second generation Mirai is leaked.

10/11/2019
Unveiled the Toyota Mirai Concept, the preview of the second generation of the model.

10/15/2015
European presentation of the first generation.