British actor Paul Ritter died at the age of 54, a victim of a brain tumor. He died this Monday at his home accompanied by his family, this was confirmed by Ritter’s agent in a dialogue with the English newspaper “The Guardian”.

“With great sadness we can confirm that Paul Ritter passed away last night,” said Paul Ritter’s agent in statements to the aforementioned media.

Paul Ritter, who rose to fame for his portrayal of Martin Goodman on “Friday Night Dinner,” battled for a few years with a brain tumor.

“Paul was an exceptionally talented actor who played a huge variety of roles on stage and screen with extraordinary ability. He was incredibly smart, kind, and a lot of fun. We will miss him very much ”, concluded his agent.

The 54-year-old actor was also remembered for his participation in one of the films of the Harry Potter saga. He played the magician Eldred Worple in the film “Harry Potter and the Half-Blood Prince.”

ATTENTION
Actor Paul Ritter (‘Harry Potter’, ‘Chernobyl’) dies at 54.
The British actor was well known in his country for starring in the sitcom ‘Friday Night Dinner’ on Channel 4. pic.twitter.com/KtmxgmDf5P

He also participated in the popular series Chernobyl, released in 2019 by the HBO network. In this historical drama that revolves around the 1986 nuclear disaster, Paul Ritter commissioned the Russian engineer Anatoly Diatlov.

Paul Ritter was also a prominent actor in British theater. It should be noted that in 2006 he was nominated for the prestigious Laurence Oliver Award for his work on the play “Coram Boy.” In 2009, his participation in the play “The Norman Conquests” (‘The conquests of Norman’) earned him a Tony Award nomination.

The farewells of his former colleagues

The artistic community sadly says goodbye to the British actor, who died on Monday at the age of 54 as a result of a brain tumor.

Paul Ritter, best known for his role as Martin Goodman in Friday Night Dinner has sadly passed away at the age of 54.

Paul had sadly been suffering from a brain tumor and died peacefully at home with his wife and sons by his side.

What is your favorite FND memory of Paul? pic.twitter.com/b2sA9hODQU

One of those who regretted his departure was Robert Popper, creator of the comedy “Friday Night Dinner”, where Ritter shone: “Devastated by this terribly sad news. Paul was a lovely and wonderful human being. Kind, funny, super loving and the best actor I have ever worked with ”.

Another of those who fired Paul Ritter was the British screenwriter, actor and producer Toby Whithouse, creator of the series “The Game” (2014), which featured the late actor as a prominent character and was broadcast by the BBC.

Knocked it out of the PARK in Chernobyl. Watching it I consciously thought, “Oh, we have a new movie star.” Between that & how funny he was in Friday Night Dinner… just unreal talent. Rest in peace, Paul Ritter. pic.twitter.com/nw8HnRZxRd

“This is devastating and terrible news. Paul was a dazzling actor, a lovely boy. How awful, ”he told The Guardian.

Paul Ritter made his acting debut in 1992, on the crime series “The Bill.” His first foray into film was in the movie “Son of Rambow.”

His contribution to British culture included appearances in historical dramas of dramaturgy. He played Pistol in William Shakespeare’s “Henry V” in a series of memorable plays adapted by the BBC.

After that work, the newspaper “The Daily Telegraph” said about Paul Ritter that he is “an actor who is destined for greatness surely very soon. His Pistol perfectly conveys the shock of a man who had reluctantly left the raucous joy of Eastcheap and found himself in the Middle Ages, contemplating the melancholy of a medieval autumn. “ 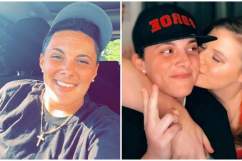