Home>U.S.>Accident on Line 12 of the CDMX metro: between controversy and a tragedy unfortunately announced for years

It was inaugurated in 2012 and was presented as the “golden line”, the most modern in Mexico City.

But this Monday, after 9 years of controversies, irregularities and failures, the line collapsed in the Mexican capital. There are at least 23 dead and 70 injured.

The tragedy occurred around 10 p.m., local time in the southeast of the metropolis, on the flyover between the Olivos and Tezonco stations.

Line 12 has been subject to public scrutiny for its flaws since its inauguration. Its nine years have been marked by closures, deterioration and repairs. 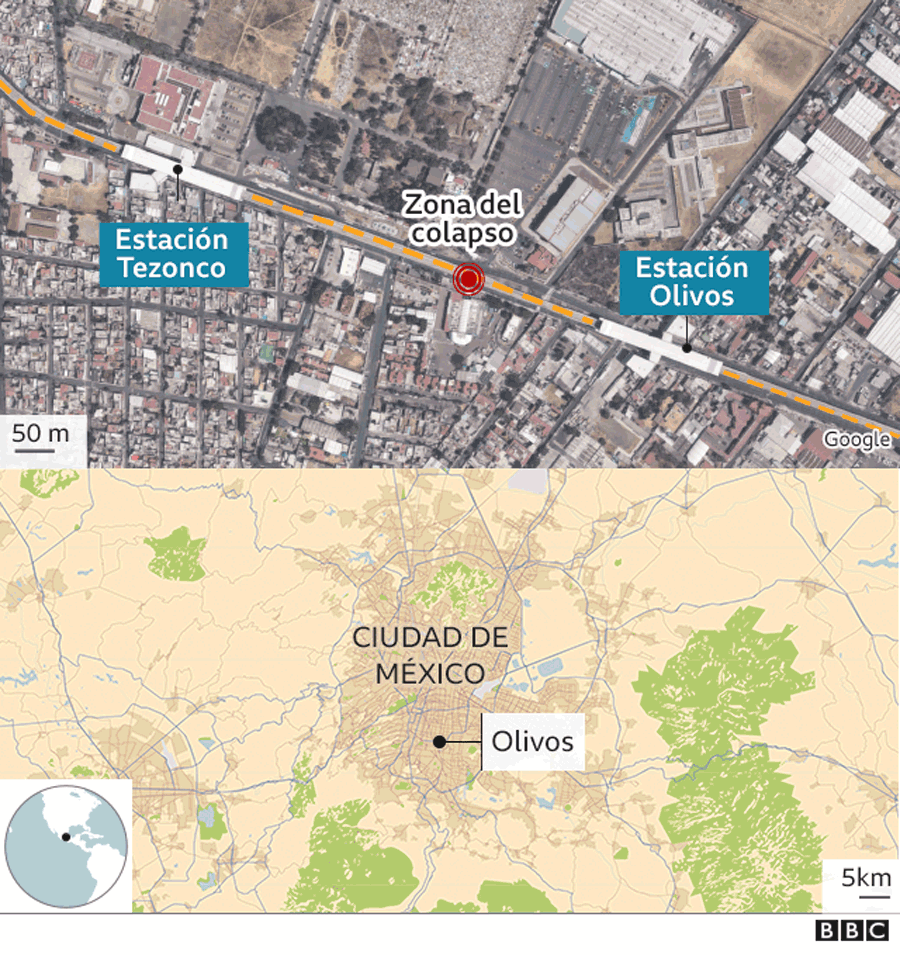 The accident occurred at the Olivos station in the Mexican capital, an area where residents had been denouncing its poor condition for months. (Photo: BBC)

Neighbors in the accident area had months denouncing the poor condition of the roads of the flyover.

In 2017, the then director of the Mexico City Metro, Jorge Gaviño, assured that the line “was born with endemic problems that will never be solved in its life” and that it would require maintenance “permanently.

This has been the controversial history of this metro line, from its inauguration to its fateful collapse. 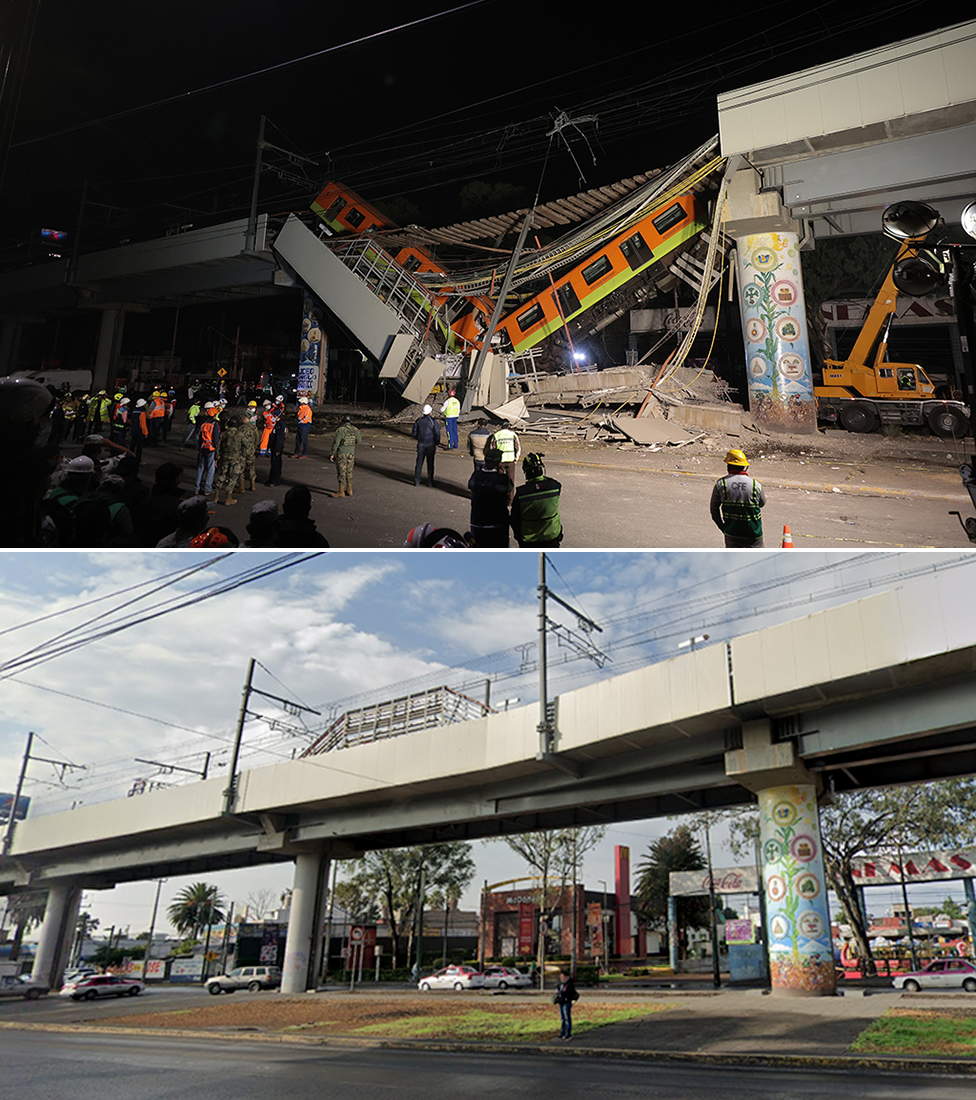 The structure of the viaduct collapsed in one of its elevated sections, which since its inauguration have been the victim of constant repairs due to its damage. (Photo: BBC)

Metro line 12 was inaugurated with great fanfare on October 30, 2012, when Marcelo Ebrard, current chancellor of the country, held the position of governor of Mexico City and Felipe Calderón the presidency of the country.

It was presented as the “golden line”, the bicentennial line that would expand the coverage of one of the busiest subways in the world with around six million daily passengers.

The work was carried out by a consortium made up of the Mexican companies Ingenieros Civiles Asociados (ICA) and Grupo Carso and the French company Alstom. 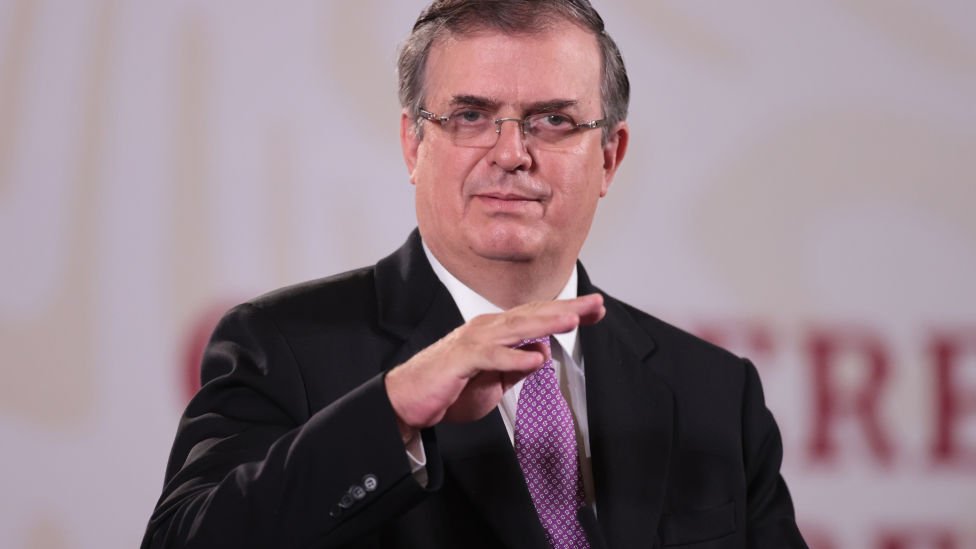 Marcelo Ebrard, current chancellor of the country, inaugurated line 12 when he was governor of Mexico City. (Photo: Getty Images)

Construction started in 2008 and comprises 23 kilometers between Mixcoac and Tláhuac stations, south of the capital. Every day it transports around 400,000 people.

The infrastructure is widely considered one of the most expensive in the history of Mexico and not only because of its initial investment.

Practically since it was inaugurated, it has needed constant monetary injections for maintenance. 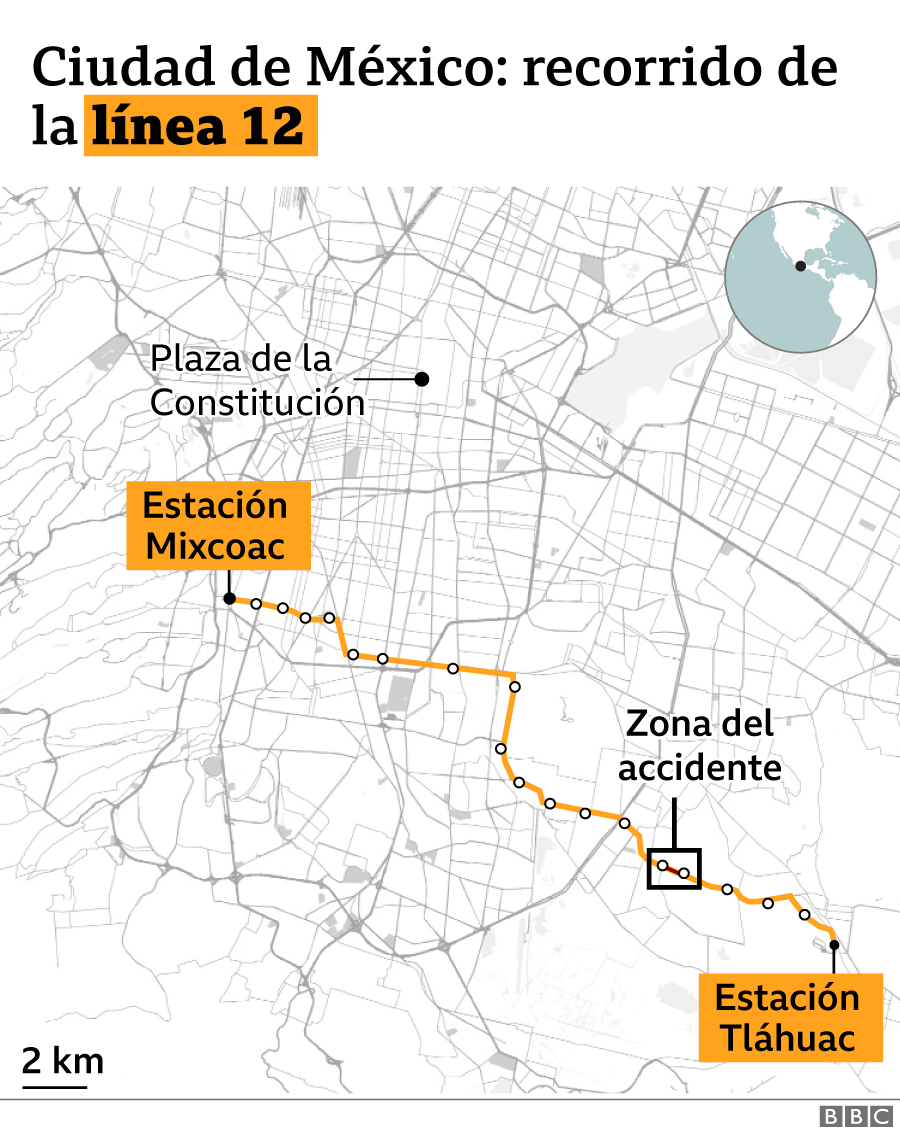 Since its opening, the line has been criticized for various malfunctions.

In 2014, just a year and a half after opening, the line had to close 11 of 20 stations to correct multiple manufacturing faults.

The closed stations included the elevated section between Tláhuac and Culhuacán.

In the affected kilometers, as explained by Joel Ortega, then director of the Metro, “wave wear on the road” had been detected, as well as “systemic failures that detract from the provision of the service and that forces a progressive decrease in the velocity”.

“We do not want this matter to reach a point where it is a security issue, that is why we announced the suspension of the service in the upper part ”, he added in an interview with Radio Fórmula.

The company in charge of making the diagnosis concluded that the line had a series of failures in planning, design and construction that caused stress on the roads and their premature deterioration, which made it necessary to replace a part of the structure and thousands of pieces.

The state of the line has been constantly criticized by citizens for the precariousness of the facilities, lack of maintenance and frequent interruptions. 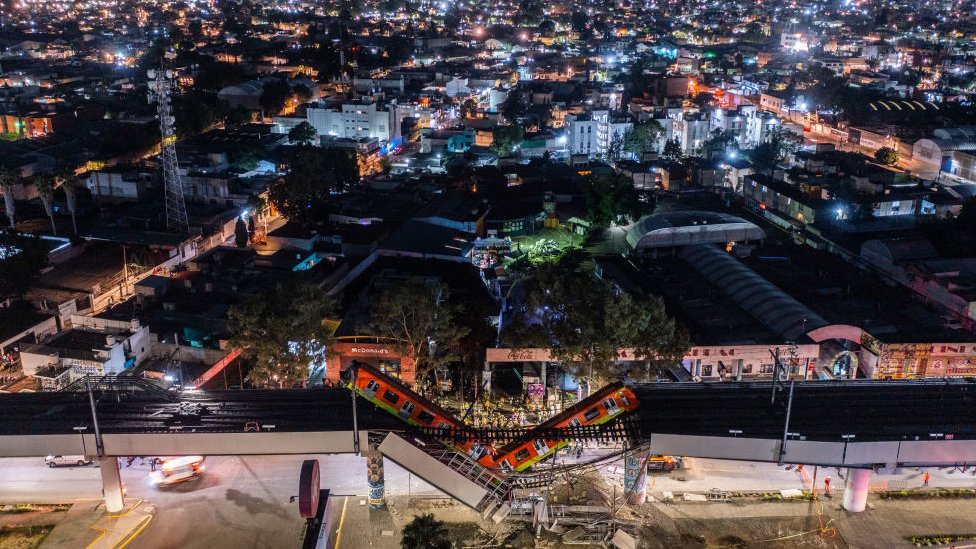 In 2017 it was admitted that the problems suffered by Metro Line 12 were “endemic” and “had no solution”. (Photo: Getty Images)

Less than two years after the closure in 2014, the then director of the Collective Transport System (STC), Jorge Gaviño, acknowledged that the line had “born with endemic problems.”

Those statements were made in the framework of new maintenance work to improve the structure.

During a tour of the works, Gaviño admitted that the damage “they were never going to be solved in his life and that the only thing that had to be done was to maintain them permanently ”.

“It will cost about 1,800 million pesos, plus inflation each year,” he added. 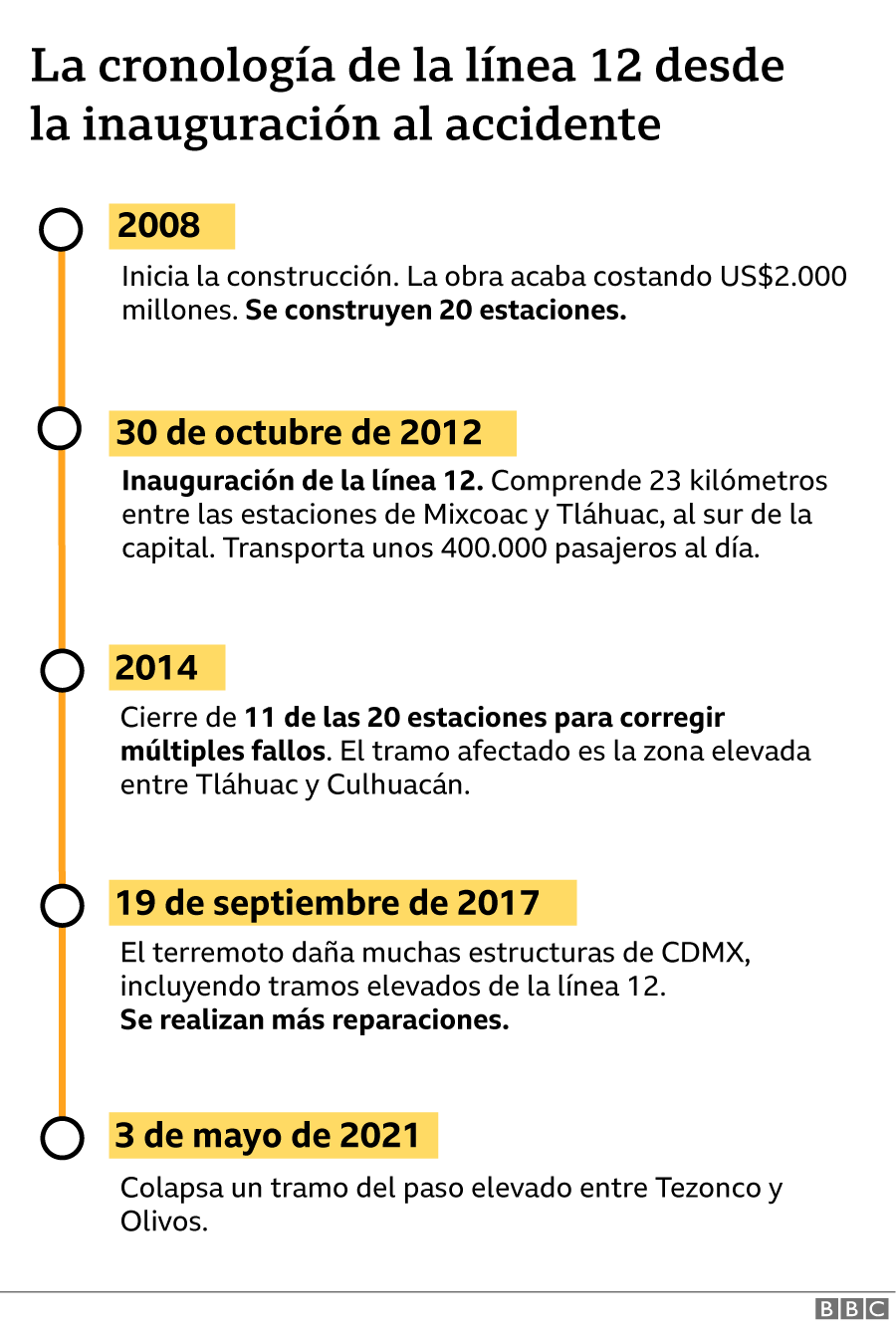 The main problems of the viaduct were registered in the sharp curves, where the rolling of the trains eroded the track more.

That same year, Alonso Quintana, then CEO of ICA, assured that the work was well done and that the problem was the trains, “Which are not compatible with the road,” according to the newspaper El Financiero.

The trains were manufactured by the Spanish company Construcciones y Auxiliar de Ferrocarriles (CAF), which assured that they met the parameters requested by the Mexican authorities.

In May 2017, after a legal dispute, the Superior Court of Local Justice ruled that the consortium of construction companies paid the capital government a conventional penalty of 2,100 million pesos ($ 103 million at the current exchange rate), for delays, work not executed, damages in construction.

In addition to claiming more than 200 deaths, the 2017 earthquake shook and damaged many of the capital’s structures Mexican. The elevated sections of the “golden line” were not saved.

Precisely in the area where the viaduct ended up collapsing this Monday, the neighbors feared misfortune.

After the earthquake, many denounced that infrastructure could collapse due to the cracks and the fall of some pieces of the construction that same year, reason why the zone was object of new repairs.

Some damage occurred in columns and base elements of the work, for which up to six stations had to be closed again, including Olivos and Tezoncos, where the collapse finally occurred.

Remember that you can receive notifications from BBC News Mundo. Download the latest version of our app and activate them so you don’t miss out on our best content.

Video shows the exact moment of the collapse of the Mexico City Metro; add more than 20 dead and dozens of injured