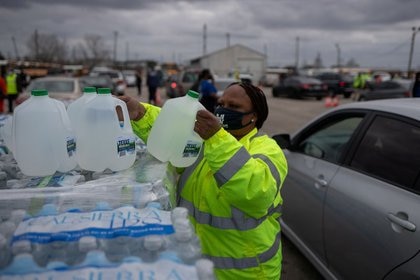 Feb 22 (.) – About 8.8 million people in Texas, about a third of the state’s population, still had problems with their water supply late Sunday, CNN reported citing authorities, after a historic freeze that disabled power stations last week.

Authorities continue to advise millions of Texans to boil their water before consuming it, although all power plants were back online over the weekend and power was restored in most homes when the weather returned to normal.

Authorities in Houston, the state’s largest city, said the water was safe to use without boiling since Sunday.

The Texas Commission on Environmental Quality (TCEQ) did not respond to a request from . for comment on CNN’s report.

Texas Governor Greg Abbott said late Sunday that he had joined the Texas Air Guard, the Texas National Guard and the US military in distributing water.

“Some 3.5 million bottles of water have been distributed,” the governor said in a tweet.

Texas is also bringing in plumbers from out of state to help repair broken pipes, the governor said Sunday. Homeowners or renters without insurance will be able to apply for a refund from the Federal Emergency Management Agency (FEMA), he said.

US President Joe Biden on Saturday approved a major disaster declaration for Texas that makes federal funds available to those affected by the storm, including temporary housing and home repair assistance and low-cost loans.

US Representative Alexandria Ocasio-Cortez said late Sunday that she had amassed $ 5 million in her fundraising efforts to help Texans hit hard by last week’s storm.

(Information from Kanishka Singh in Bengaluru; edited by Gareth Jones, translated by Michael Susin at the Gdansk newsroom)