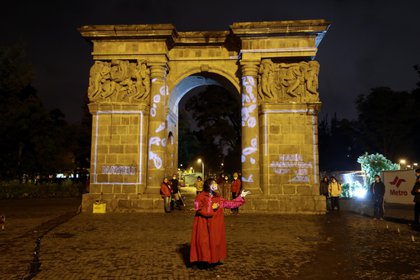 An artist appears before family and friends of victims of femicide in Ecuador this Saturday, as part of a sound ritual so that society is not indifferent and that the State assumes responsibility for this type of crime. menes. . / Jos J come

Quito, Nov 21 . .- A group of relatives and friends of victims of femicide in Ecuador held a sound ritual this Saturday so that society is not indifferent and that the State assumes responsibility for this type of crime.
“Sounds of memory” was the motto of the action carried out by dozens of people in a sector of the El Ejido park, in the center-north of Quito, where they evoked the memory of hundreds of women who have died as a result of violence male chauvinist.
According to an investigation by the Alianza Mapeo organization, 825 people have been murdered since 2014 for the mere fact of being women, and so far this year the number of victims of this type of crime has risen to 101, according to the group.
So far in November alone, 13 women have been murdered “and the numbers continue to increase under the passive gaze of the State and society,” the organizers of the ritual specified.
Ruth Montenegro, mother of one of the victims of femicide, recalled that her daughter, Valentina, was murdered in 2016, but stressed that this type of crime has not stopped and that therefore it is necessary to shake the public conscience.
The action that took place today in Quito, which took place despite the persistent rain that fell in the city, has as its objective “the search for justice, for Valentina and for all the women who have been murdered” in a context of sexist violence. , said Montenegro.
He stressed that “Sounds of memory” has been organized to “raise its voice for them” and has become a “cry for justice, for dignity and for no more impunity” in the face of femicides.
Montenegro added that the sound ritual also aims to become a space of “memory” and “resistance” to “create collective consciousness” about this phenomenon.
Slendy Cifuentes, sister of another of the Ecuadorian victims of femicide, Johanna, pointed out that the sound ritual is part of the commemoration of the International Day for the Elimination of Violence against Women, on November 25.
Cifuentes specified that today’s activity will be limited to the space where the ritual has been programmed because the conditions and restrictions applied by the coronavirus pandemic have prevented the organization of mass protest marches, as has happened in the past.
With the sound ritual “we are going to name each one” of the 101 victims of femicide that have been registered so far this year, a period that has been hard for many women who have had to live confined by the pandemic under it roof with his attackers, added the activist.
The motto of “stay at home has become die at home” for many women, “without society doing anything” to stop this type of crime, Cifuentes mentioned.
In addition, he pointed to the State as part of the structural problem of the phenomenon of femicide and said that, for example, “only 1 percent of complaints end with a final judgment.”
“That is why justice is required for all,” and that the State ensure a framework of “justice, truth and reparation” for the victims of sexist violence.
The sound action, according to the organizers, will be replicated every month “until receiving effective responses from the State and society.”