The United States has taken another important step to return to normality and its health authorities have communicated that all those who are fully vaccinated They can do without the mask both indoors and outdoors, nor will they have the obligation to maintain the safety distance established up to now.

At the moment, The United States has 46% of its population with at least one dose of the vaccine, and 35% complete guideline. It is still far from that 70% that has been stipulated as group immunity. Given that Spain will reach 35% of those vaccinated with a complete schedule at the end of June, should we expect similar measures?

Some exceptions to keep in mind

As the Centers for Disease Control and Prevention (CDC) have published in a statement: “The science is clear: if you are fully vaccinated, you are protected and you can start doing those things that you stopped doing because of the pandemic.” Immunized people, therefore, may be without a mask in the open air, but also indoorsregardless of the size of the space. The authorities thus hope that these measures will help to encourage vaccination, which is losing steam, something that has even been reflected in a tweet from President Biden. 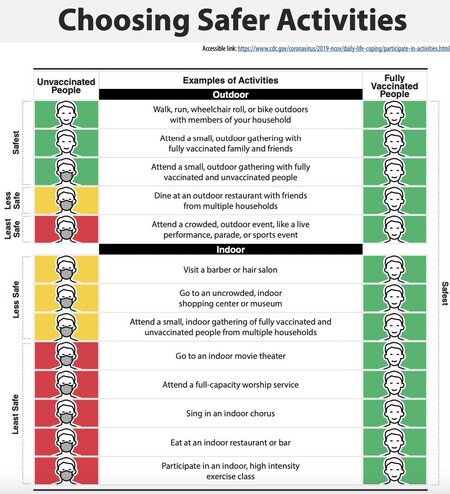 With everything, there are nuances to take into account when lifting the obligation to wear a mask. For example, its use in public spaces such as hospitals, buses, airplanes, prisons or nursing homes is still recommended. The masks are also kept for everyone, vaccinated or not, at mass events (concerts, parties, etc).

Be that as it may, the new rules constitute a very important change with respect to the previous criterion, when you could only do without the mask outdoors as long as you weren’t surrounded by a crowd. From now on, basically, vaccinated people can do without a mask in almost all their activities, both indoors and outdoors.

What does science say about it?

However, this radical change in measurements, in addition to being based on science, could be inspired by a strategy consisting of encourage citizens to get vaccinated: The problem in the United States is not the shortage of vials, but the resistance of the population to get vaccinated. So it’s no wonder there are outlandish incentives for those who get vaccinated like giving away an Ohio lottery with prizes of up to $ 1 million to gift cards, donuts or beer.

The strictly scientific criterion, however, does not seem as optimistic as the CDC seems to suggest with its new measures. From what we know so far, the greatest risk of transmission of SARS-CoV-2 occurs indoors, not outdoors. For this reason, in Gibraltar the use of the mask for outdoor activities is not required since the end of March, but it is required indoors, despite the fact that more than 70% of its inhabitants had already received the complete vaccine schedule. Israel, for its part, after vaccinating with a 62% dose (56%, both), lifted the obligation to wear a mask, but only outdoors.

Other evidence that we have to date is that a vaccinated person has a high probability of being immune to contagion and, if infected, will have much milder symptoms: a trained immune system clears the virus before it can cause serious damage to the body. But even with mild symptoms, those reinfected can be a source of spread of the virus, as suggested by the recent SIREN study (SARS-COV2 Immunity and Reinfection Evaluation), carried out by the British public health system.

That is to say, it is not only difficult at a logistical level to control that in a closed space there are only immunized people, but that the non-immunized could be infected by the immunized, since immunization increases the number of asymptomatic people who do not know they are infected. And finally, as if that weren’t enough, getting COVID-19 after receiving the vaccine is possible, although it is extremely rare.

We can affirm that there are still many doubts when it comes to clarifying to what extent vaccines will interrupt the transmission of the virus. In addition to all this, it is necessary to continue investigating how the different vaccines act against possible variants of the virus. It seems that they are still effective, but but they could be less so against other mutations.

We still do not know how Spain will act when it reaches the percentage of immunized that the United States already has. In Spain there is still the obligation to wear the mask outdoors even if there is no safety distance, including outdoor spaces such as the beach, the pool or the mountains.

And, although health authorities have not yet ruled on when masks may be discontinued in Spain, the European Center for Disease Prevention and Control suggests that distancing rules and mask requirements could be relaxed for those are vaccinated against COVID-19, but at the moment not in the flexible way as proposed by the CDC.

Specifically, from the ECDC several scenarios are proposed according to the danger of being infected in encounters with vaccinated people, but all of them take into account the bubbles of coexistence or groups that meet while being fully vaccinated. The idea that, a priori, we can gather at our discretion in all spaces, both exterior and interior, not contemplated at the moment.